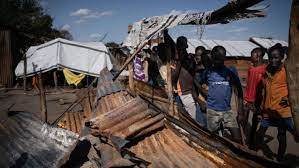 A significant rise in violence in South Sudan threatens to undo the country's fragile peace agreement before its elections next year, which the global community hopes can be held successfully and free of events. However, there has been a wave of almost daily killings across the East African country, ending hundreds of lives since the beginning of this year.

The wave is attributed to ominous militias, whose attacks on the 2018 ceasefire for peace between President Salva Kiir and Vice-President Riek Machar are becoming more and more dangerous. The conflict that came to a conclusion in 2018 with a peace accord resulted in the deaths of tens of thousands of people.

While the two leaders have been cooperating their efforts in the same government in relative peace in the capital, Juba, South Sudan appears to be at war in other parts as hundreds of people have reportedly been killed since the beginning of the year in acts of violence ranging from cattle raids to ethnically motivated killings.

The incidents of violence appeared to worsen in June after Pope Francis canceled his visit following a knee problem. His visit was meant to encourage hope and faith in the country, which had been damaged by years of unrest, including a long battle for independence from Sudan, followed by civil war.

According to a violence tracker by the Juba-based civic group known by its initials as CEPO, at least 209 people were killed, and 33 injured across the country in June alone. Mr. Kiir and Mr. Machar are currently under pressure to release a timetable for the 2023 presidential elections. While Mr. Kiir expressed confidence that polls could be held in a secure environment the following year, Mr. Machar voiced skepticism. He asserted that elections were impractical in the face of such intense fighting.

In the President's home state of Warrap, where victims include a military intelligence officer and a former government commissioner, violence has recently gotten worse. The President said that killings have also been recorded in the states of Eastern Equatoria, Western Equatoria, and Central Equatoria, recognizing that recent intercommunal violence has undermined peace advancements made since 2018.

Following the killings in Warrap, Mr. Kiir's army chief, General Santino Deng Wol, has vowed to curb ethnic militias, stating: "We are responsible for the security of the country" and "We will not allow chaos to happen, and we will not allow anyone to disturb the security."

Though troops can protect civilians, it is being argued by some analysts who say that civilian attackers often outnumber government troops and police in areas awash with small weapons as they cannot be solely relied on to protect civilians. They also claim that the attackers have powerful political backers in Juba.

Recent events have also hampered communities in desperate need of food, medicine, and other supplies: "The scale of the sub-national conflict now spreading from north to south, from east to west, is alarming," UN representative for South Sudan Nicholas Hayson said before the Security Council last month. He claimed that community-based militias were responsible for eighty percent of intercommunal violence, arguing that such violence would sever relationships between groups and prevent reconciliation.

There had been high hopes when oil-rich South Sudan gained independence from Sudan in 2011 after a protracted conflict. However, the country slid into civil war in December 2013 due to ethnic divisions when forces loyal to President Kiir battled those supporting Mr. Machar.

Tens of thousands of people were killed in the war, which ended with the signing of a peace agreement in 2018. However, the terms of that peace accord have not been fully implemented, and growing violence is weakening its resolve even more.