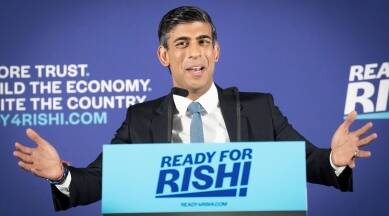 Rishi Sunak is all set to replace Boris Johnson as leader of the conservative party and Prime Minister in the second round of voting for the UK PM race.

Sunak is an Indian-origin former Chancellor of the Exchequer who has secured 101 votes to come up as the winner of the last voting round on Thursday. He succeeded Penny Mordaunt by 83 votes and Foreign Secretary Liz Truss by 64. Mordaunt and Liz can acquire the support of the knocked-out candidate Suella Braverman, an Indian-origin Attorney General. The pro-Brexit caucus backed Braverman.

According to Sputnik News Agency, “no minimum number of supporters has been set this time to advance to the next round, and the candidate with the least votes was excluded from the race.” Both Sunak and Mordaunt still face possible obstacles before they get to the final two put to the vote by other members.

The last two candidates will stand next Thursday while Parliament goes on summer recess. They then embark on a six-week tour of Britain to make their case toTory members. The winner will be announced on September 5th

Currently, the increasingly unstable competition is on a three-day hold, during which MPs can personally plan their next move and ensure that their preferred candidates move forward next week. Candidates have an opportunity to popularise themselves in a series of television debates over the next few days. This media use has been prevalent in recent times, especially during the Presidential elections in the USA.