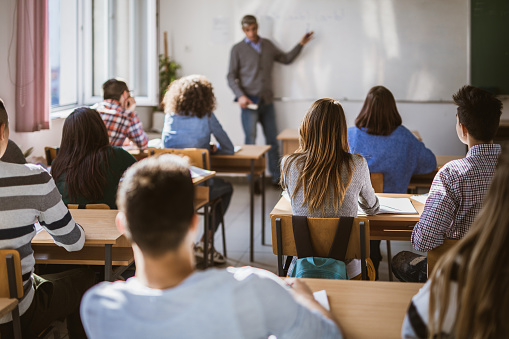 Every year, in the province and city of Buenos Aires, Argentina, a small group of high schools close their doors and pause classes. This action, known as school takeover - or as Argentinians call it, “toma de escuelas” - is taken by students, teachers, and even the school's administrations. Their goal? To reclaim and defend the rights of public institutions.

The takeovers usually consist of the interruption of classes. The school is occupied by students demonstrating and protesting against measures taken by the Ministry of Education of the City, or in the name of reclaiming rights. Some students and teachers spend the night (the so-called “pernoctar”) inside the schools, as a means of protest.

This year’s takeover consisted of 13 schools in the City of Buenos Aires (CABA) and more than 20 schools throughout the province of Buenos Aires. The demonstrations centered around the demand for food of better nutritional quality in schools, better building infrastructure, and against certain work practices in companies. The Mayor of Education Soledad Acuña warned the students that if they continued with their takeovers, they might lose their status as ‘regular students, which would mean they would have to retake the academic year.

Moreover, the Mayor and the Ministry of Education also declared that monetary compensation would be demanded from the parents of the students taking part in the takeovers. This declaration provoked a new wave of protests. Indeed, the Colegio Nacional de Buenos Aires students spent the night of September 29, 2022, inside the school, as a way to defend the rights of public education. The students stated that they believe that public education, in general, is being attacked by the political persecution that Acuña and the City’s police are carrying out.

The students clarified that the actions of "political persecution" consist of: "finding out details of minors, entering the home of parents, initiating criminal proceedings, demanding exorbitant amounts of money for each day of takeover that responds to the lack of listening and the lack of predisposition against claims that have much validity and that make us remember the worst moments of our history".

Indeed, after the government of Horacio Larreta decided to send police officers to the homes of some of the students participating in the takeovers, families began to organize in response, through different agencies and lawyers, to the penalty warnings and criminal complaints made by the Ministry. In response to these measures of student protest, Soledad Acuña said that there is no possible situation in a democracy that justifies closing a school.

As for last week, on Monday, October 3, 2022, two of the remaining schools in the city of Buenos Aires decided to stop the takeover, leaving only four schools still on strike. After their complaints had not been listened to, these two schools decided to try stopping the takeover in the hopes of being able to get in touch with the Mayor, who had allegedly been ignoring the schools’ letters of complaint. As for the remaining schools on strike, protesters went to the headquarters of the city’s Ministry of Education to request a comprehensive treatment of the problems, but no official received the request. We can only expect that in the following weeks the last remaining schools will also lift their takeovers and start classes again.