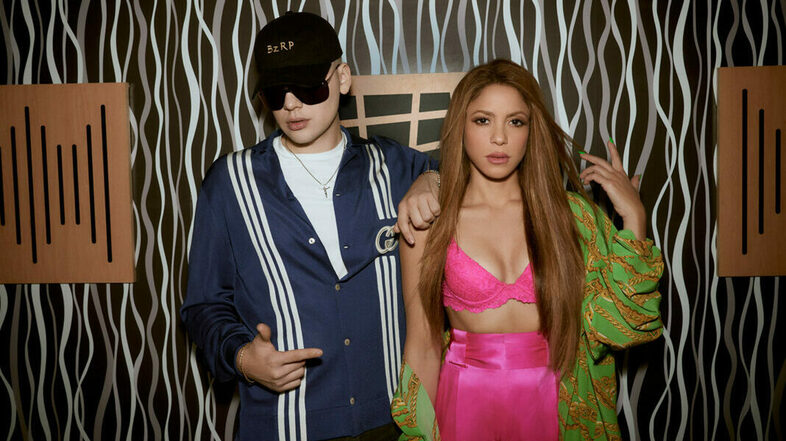 The song released Wednesday, January 11, broke streaming records on YouTube with over 63 million in 24 hours, making the most-watched video clip in Latin America for the platform. In addition, Spotify announced that the “Session 53” by BZRP ft. Shakira skyrocketed to the top list in Argentina, Colombia, Mexico, and Chile. Making the most-streamed song in Latin American history with over 15 million in a day for the music platform.

The song seems to make references to Shakira's ex-partner, Gerard Pique with a play on words that ridicules or mocks events or facts of the broken relationship.

I was out of your league and that’s why you’re with someone just like you.”

Sings the singer born in Barranquilla, Shakira emphasizes how valuable she considers herself and how poorly her partner responded to her love.

Celebrities around the world reacted positively to the song, including Danna Paola, Antonella Rocuzzo, Paquita La del Barrio, Villano Antillano, Leslie Grace, and so on.

“And yes… ‘Women don’t cry anymore; they cash in and get paid’” tweeted the Mexican singer and actress Danna Paola.

“Just express it in a song with feeling,” Paquita La del Barrio replied to who emphasizing how Shakira was taking economic benefits from the breakup.

In a brilliant play on words and pauses, it can be inferred that Shakira is referring to two people in particular, Gerard Pique and his new partner Clara Chía.

Singing in Spanish and making pauses when she pronounces “Salpique” (bothers you), Shakira plays with the tempo to deliver a name. She seems to use the same resource to mention another person.

“She has the name of a good person

It should be noted that this song and its lyrics are merely interpretive. Shakira became a symbol of saying what women keep when they end relationships and becomes a symbol of female empowerment.

Social networks have been flooded with memes, phrases, and discussions about the subject in question.

The song makes a reference to trading a watch brand as Rolex which is expensive for one more affordable as Casio. The brands used the moment for promoting their products.

“Today we have quite a few notifications for a mention of CASIO in a song. CASIO (watches and keyboards) and (calculators) are from and for life,” the Casio account wrote on Twitter.

In addition, the French multinational automobile Renault shared a picture of a red Twingo with the number 22 on the driver’s door with the message: “For guys and girls like you. Turn up the volume!” the brand wrote.

All this came to Gerard Pique, who used a Casio watch during streaming and announced that Casio will be his new sponsor in the fantasy tournament called King's League which he organizes together with streamers like Spaniard Ibai Llanos.

“This Casio is for life,” Pique said.

In case, the reader wants to check the lyrics this link will take you to the English translation.

The Enduring Legacy of Hot Ones