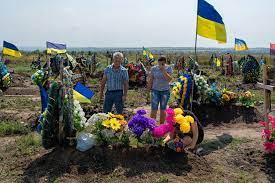 UN Secretary-General Antonio has said Russia's war in Ukraine is a "sad and tragic milestone."

In a statement to the UN council, he added,

“The warning lights are flashing. Any further escalation of the situation could lead to self-destruction. The security of the plant must be ensured, and the plant must be re-established as purely civilian infrastructure."

Ukrainians are marking 31 years of independence from the Soviet Union through public displays and memorial services to honour those lost.

However, events for Independence Day have been banned in Kyiv over fears they could become a target for Russian attacks.

To aid the war, global leaders are reiterating their support for Ukraine. For example, Johnson pledged the UK will provide an additional £54m worth of military aid to Ukraine.

In addition, President Joe Biden has confirmed $3bn (£2.5bn) of continued US military support for Ukraine.

Ukraine has also reported an immoderate number of Russian strikes, particularly in the Donetsk Region.

Currently, Russia controls around a fifth of Ukrainian regions. Many areas around Kyiv were taken in early April after Russia abandoned its push toward the capital.

For a visual description of the Russian-Ukrainian war, click here.