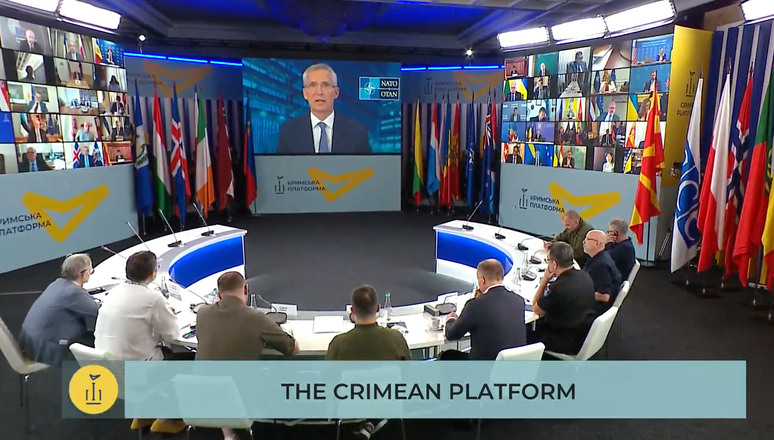 On August 23, the second edition of the Crimean Platform Summit took place in a teleconference, with the participation of 60 countries. This format was chosen for security reasons. The Ukrainian president, Volodymyr Zelensky, expressed his gratitude to the participants during a press conference held in Kyiv after he met with Polish President Andrzej Duda. Accordingly, Zelensky thanked Poland for its overall involvement in and support of Ukraine. The country has been on the front line since the beginning of the war in February, promoting defence and security as well as giving shelter to thousands of Ukrainians.

Moreover, the Ukrainian president did not hide his satisfaction with this year’s participation of several African and Latin American countries in the summit. Zelensky applauded the presence of these countries as they can potentially reverse the non-alignment tendency registered since the inception of the conflict. This, along with excellent relations with Poland, is necessary for the Ukrainian cause. Concerning Poland, Zelensky’s words can be interpreted as an indirect critique vis-à-vis countries like Hungary and its well-known pro-Russian stance. This, in turn, highlights the fractures in the so-called Visegrad bloc, an alliance made up of Poland, Hungary, the Czech Republic, and Slovakia. This bloc was created to promote the four countries’ further integration into the EU on issues like cooperation in military, economic, cultural, and energy affairs.

Furthermore, when it comes to Hungary, some ambiguities can be observed. Right before the Crimean Summit took place, another initiative was promoted, the Kyiv Initiative, that would bring together several Eastern European countries. Its participants are Poland, Hungary, Romania, Slovakia, and the Baltic states. The aim is to strengthen regional cooperation, especially in the field of security. The presence of Hungary, although welcomed by Ukraine, sparked some misgivings. These were expressed by Dmitro Kuleba, the Ukrainian Minister of Foreign Affairs. The politician pointed out that the Kyiv Initiative’s character is based on a Euro-Atlanticist approach, which may clash with Hungary’s internal and external politics.

Hungary is currently seen by many as the Kremlin’s fifth column, the Trojan horse inside of Europe. The country has not joined all sanctions against Russia and is striving to reduce possible upcoming ones. Despite this, the minister said that, in his opinion, Hungary is acting as a fifth column of itself, a process that may produce only internal backlashes. Kuleba maintains that, to date, Budapest's interventions against some of the EU’s decisions are not of a magnitude such as to create hindrances to Ukraine. He does not exclude that the situation may change anytime soon.

Despite these concerns, the summit served as a platform for the consolidation of Western support for Ukraine to confirm the country’s sovereign rights over Crimea and the newly occupied territories of Donetsk and Luhansk. Several leaders expressed their unconditional support, starting with the U.S. Secretary of State, Antony Blinken. He confirmed how important it is that the international community insists on the fact that Crimea, Donetsk, and Luhansk are inseparable parts of Ukraine and are currently under occupation. Moreover, he added that Ukraine’s allies should keep up the international pressure against Russia to restore the rights of all Ukrainians and insist on humanitarian efforts.

A similar message arrived from the UK through Prime Minister Boris Johnson. After congratulating Zelensky for putting together the summit, he blasted Russia, saying that the Kremlin annexed territory that it had on several occasions recognized as part of Ukraine. By doing so, Russia violated several international agreements, like Article 2 of the United Nations Charter and the Helsinki Final Act, not to mention the Treaty of Friendship between Russia and Ukraine. He also underlined the brutalities perpetrated by Russia in Crimea due to the continuous violations of human rights, particularly regarding land ownership restrictions against the local Crimean Tatar population.

The Council of Europe Secretary General, Marija Pejčinović Burić, and the President of the European Commission, Ursula von der Leyen, voiced concerns about human rights violations. In particular, von der Leyen highlighted several problems. Among them: are the torture and killing of local Crimean Tatars and the violence against journalists in the region. She confirmed the EU's support at the humanitarian, economic, and military levels. Regarding the several sanction packages issued against Russia since the beginning of the war, she commented: “Our sanctions are critically undermining Putin's war machine and the Russian economy."

Jean Michel, President of the European Council, stressed Russia’s cynicism in weaponizing grain resources in Ukraine to weaken international support for the country. He praised the recent agreement signed in Istanbul that allowed the unblocking of grain shipments from the Russian-controlled Ukrainian ports. He further confirmed the EU's support and called on all the countries in the world to support Ukraine and boycott Russia.

As for Turkey, a country that has been playing the role of mediator since the inception of the war, the message was clear: "The return of Crimea to Ukraine, of which it is an inseparable part, is essentially a requirement of international law." The Turkish president, Recep Tayyip Erdogan, referenced the problem of the Crimean Tatars. A Turkic population with close kinship to Turkey, the Crimean Tatars have all along enjoyed the unconditional support of Ankara.

Russia did not remain silent. Moscow responded indirectly through Eyvaz Umerov, head of the regional national-cultural autonomy of the Crimean Tatars. As reported by Ria Novosti, the man defined the international summit as a sabbath and a clown show. From a political and legal point of view, Crimea is part of Russia, and no one has the right to question it. Moreover, according to the same source, the Press Secretary of the President of the Russian Federation, Dmitry Peskov, described the summit as an anti-Russian and extremely unfriendly event.

The Crimean Platform was created by Volodymyr Zelensky in 2021. Its main goal is the restoration of Ukrainian-Russian relations through the latter’s recognition of the illegal nature of the annexation. Other issues discussed are the unhindered trade activities in the Sea of Azov, environmental problems in the wider area, and the protection of the Crimean Tatars.