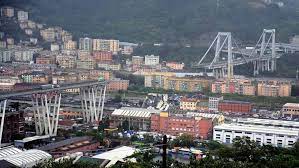 The trial regarding the collapse of a bridge in Genoa, which had its first hearing last Thursday, July 7, has been interrupted, and will continue in September 2022.

We’ve probably all seen the shocking images and videos of one of Genoa’s main bridges, Ponte Morandi, collapsing on August 14, 2018. This catastrophe caused 43 deaths, and left hundreds without a home. Yet since then, Ponte Morandi has been demolished and on the site of the 2018 disaster stands a brand new viaduct.

Ponte Morandi was a place of tremendous importance; it was one of the main passages from the Italian to the French riviera, as well as from Northern to Southern Italy. When it was built in 1967, it was a symbol of Italy’s growing economy, as more and more Italians were able to afford cars, and quality of life was increasing. It was also a symbol of architectural innovation that inspired the construction of many other viaducts, bridges and tunnels.

When it fell apart in 2018, it was full of traffic as usual. The trial will attempt to discover what caused this tragedy, and there are many possible reasons: according to documents dating from 2013, it was known that the bridge was at risk of collapsing. The blame has been put on the impracticability of the cables that were used- which are hard to inspect and preserve, - on corrosions, and even on construction errors.

Unsurprisingly, the trial therefore involves 59 people facing charges of manslaughter and safety failures, many of whom worked for the Italian motorway firm Autostrade per Italia (Aspi), and Spea engineering company, which was responsible for tending to the bridge.

However, victims and their families are not very hopeful. For them, this catastrophe was a symptom of a bigger issue, the aging of Italian infrastructure. They argue that Ponte Morandi’s safety failures and ultimate collapse was likely just the tip of the iceberg.

With all these uncertainties, this is where the problem stands four years later. After the first day of hearings, Judge Paolo Lepri adjourned and set a new hearing for September 12, for a trial that is expected to take more than a year to reach its verdicts.