Mehran Karimi Nasseri, who famously lived in Terminal One of Charles de Gaulle Airport in Paris, France, has passed away. This compelling story of a man who was left stateless took over the world when it reached mainstream media. The tale was so fascinating to the media that the movie “The Terminal” was created based on Nasseri’s situation.

Nasseri was born in 1945 in the Iranian city of Masjid-i-Suleiman. In 1977 Nasseri was stripped of his Iranian citizenship and passport after being arrested for protesting against the leader of Iran. This led to his exile from the country, making Europe his next destination.

After a complicated battle in the mid-1980s with the United Nations agency in Belgium, he was given refugee rights to stay in France and the United Kingdom. Fast forward to 1988, and now being provided with refugee status, Nasseri decided to settle in the United Kingdom with aspirations to return to university. However, this is when problems arise for him.

Upon arrival in London, Nasseri was missing the most important documents to complete his journey to the United Kingdom. The briefcase with all his refugee documents and identification had been stolen at a train station in Paris. This led UK authorities to deny his entry, sending him back to Paris, where he would make this destination his settlement for the next 18 years of his life.

When he arrived in France, officials at Charles de Gaulle Airport were also troubled, now knowing that he was left with no identification and eventually put in detainment at the waiting area of Terminal One. The more time passed, the more comfortable Nasseri made himself with his stay. The French government could not implement any actions against Nasseri due to no documentation. 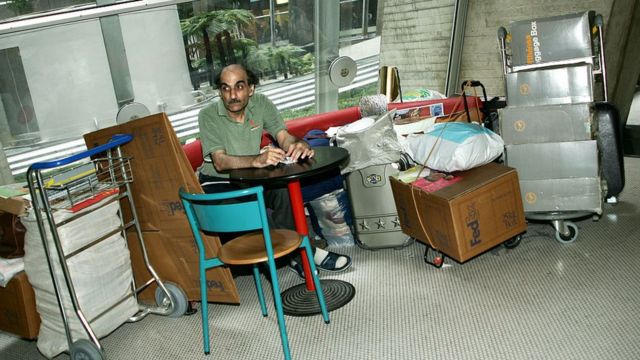 Photo Credits above to BBC News

France attempted deportation, but no countries would accept him during this time of strict immigration regulations. After almost eleven years of living at Terminal One, in 1999, the French government finally struck out a deal that granted Nasseri permission to live anywhere in Europe. After being supplied with new legal documents, Nasseri declined their usage of them and stayed at the airport for another seven years until 2006.

Nasseri became comfortable at the airport as he genuinely enjoyed the area, making it very hard for him to leave. Medical issues in 2006 led to his room being disassembled, and he was placed in the hospital for a lengthy period. Upon release from the hospital, he was placed in various shelters and nursing homes throughout France to accommodate his living situation.

According to CNN in September 2022, Nasseri moved back to familiar territory as he decided to live within the airport again after rumors indicated that he was homeless. His new destination was Terminal 2F. After a two-month stay, Nasseri passed away on November 12, 2022, from a heart attack. He was 76 years old.