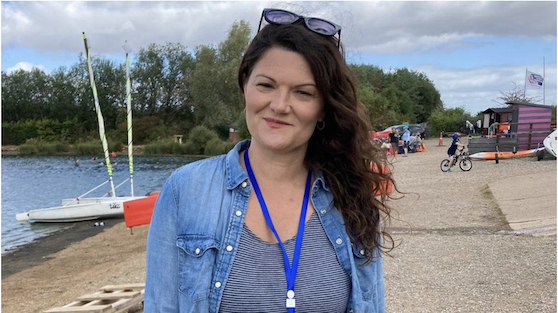 (Credit: BBC- Rachael Morlano, at the camp, spokesperson for LoveBristol)

A Holiday camp was set up for refugees from Ukraine in Tewksbury, Gloucestershire, organised by the charity, LoveBristol.

According to a spokesperson, Rachel Molano,  interviewed by the BBC, "Some of the children have not smiled or laughed in so long,"

"Just to see them here smiling, laughing, having the best time is really heart-warming," she added.

The week-long camp for the young refugees was also partly funded by a GoFundMe page, donations from the local church and the park itself, Croft Farm Waterpark.

One of the young people, Mats, aged 16, told BBC, ‘-Shows young people from Ukraine we are not alone.’

"They love being with other Ukrainians, not having to speak English for a week, and they're just having the best time," added Ms Molano.

This follows the recent work that that charity has done for Ukrainian refugees, including welcoming many to community hubs, the BBC has been told, creating safety and a sort of family environment for many people of all ages who have lost everything, from home to family and jobs in the globally impacting war started by Russia’s army.

Oleksandra, 26, came to the UK from Odessa to the hub in Avonmouth and said to the BBC, ‘(I felt my) life and future were over (when Russia invaded.).’

‘You feel like you are part of a big Ukrainian family, and you are not alone in this world,’

"I left my family because they refused to leave, but they pushed me to go."It has been difficult (without them), but there is so much support here in Bristol.’

Others at the shelter were made to feel welcome with clothes and a bag of groceries, as they only had the clothes and belongings they could carry. Volunteers also helped the children get into local skills and assisted with the necessary paperwork that was in English.

One particular refugee, Nataliia, came to Bristol with her two sons, left traumatised by the sounds of missiles flying overhead. She told the BBC she was pleased that

‘(They) meet other Ukrainians and the kids to play with other kids.’

University students from Bristol have even been assisting the Ukrainian refugees, flying out to places like Poland to serve food to those fleeing the conflict, mostly the students that are fluent in Russian or Ukrainian.

Matt Collins, one of the student volunteers, said to the BBC that he heard "heart-breaking" stories from people who had fled the fighting via supposedly safe areas agreed upon by Russia and Ukraine.

"They were being shot at with rockets, from planes - everything - while trying to pass through what was supposedly a green corridor,"

He flew out a week before anyone else in the group to Rzeszow, south-east Poland, to help sort through supplies sent by the British public, to reassure the refugees and get to know their stories amongst the struggle.