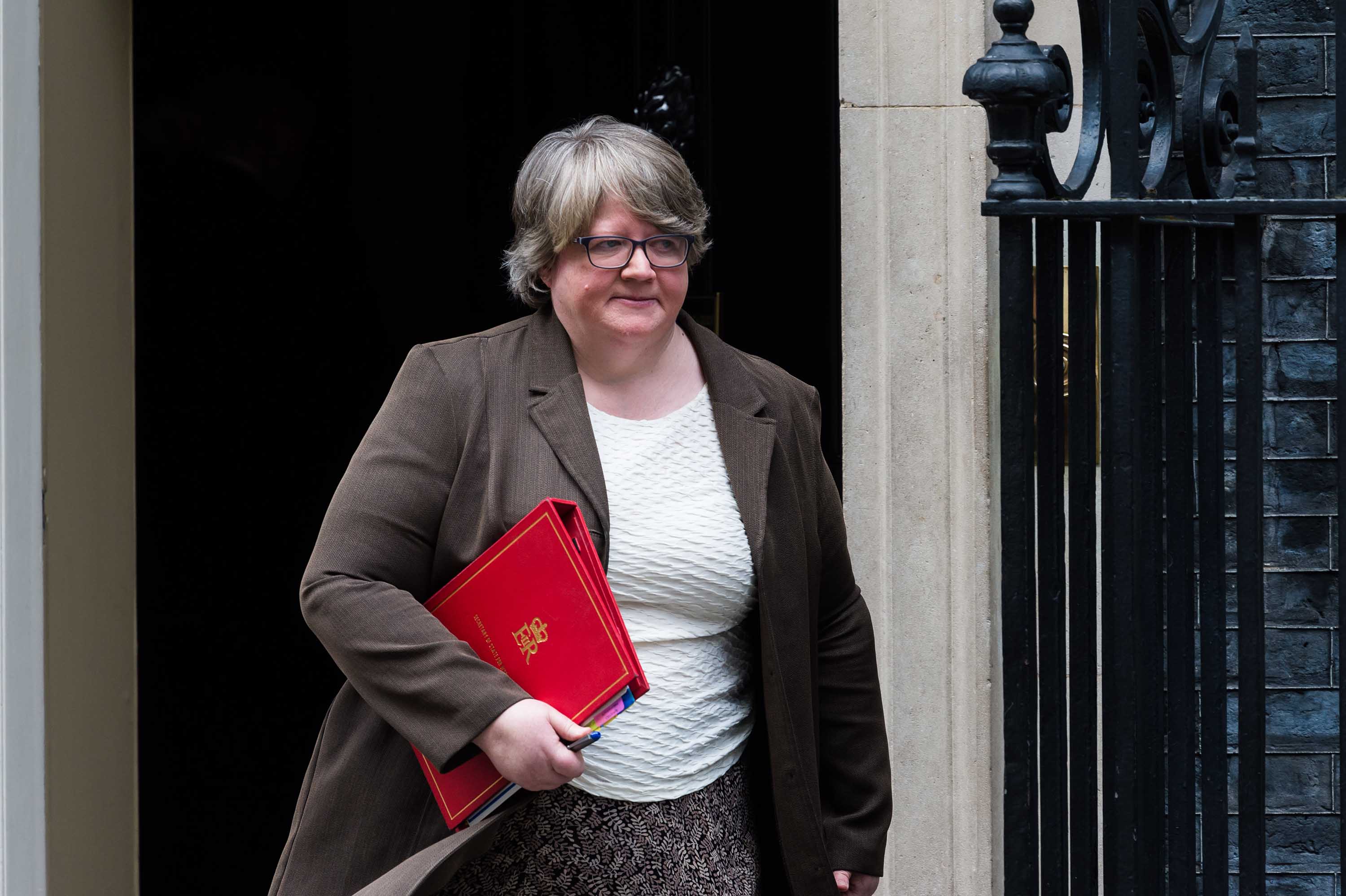 In the history of politics, it is not unusual for ministerial teams to set out ways of working style. At times these personal style guides are welcomed with open arms and sometimes it causes division of opinion and debates in the same way the Oxford comma has caused in the world of punctuation marks. The situation around accepting new rules is juxtaposed with the acceptance of the Oxford comma in the grammar book as a UK official receives flak for the same.

British government official Therese Coffey has come under fire for advising doctors not to use the Oxford comma. The guidance issued by her office asked workers to avoid using policy “jargon” and stop using Oxford commas. The new health secretary and deputy prime minister’s office issued the bizarre order in an email to staff in the Department of Health and Social Care and the UK Health Security Agency. The document was titled “New secretary of state ways of working preferences”, according to Financial Times which first reported the story. The instructions which were published on the department’s intranet also told employees to “be precise” and “be positive — if we have done something good, let us say so and avoid double negatives.”

The ban on the usage of the Oxford comma in the new working style guide has now sparked a backlash. Some medical professionals called it insensitive while other health workers said it's “patronizing”. In an interview provided to The Financial Times, one UKSHA employee told that the email was “super patronizing” and added: “The idea that we have to frame issues positively indicates a person who doesn’t want to deal with problems, so that’s not encouraging.”

Twitter users were especially unforgiving and openly registered their strong criticism for the email. One Twitterati used an Oxford comma and said: “Therese Coffey can take a running jump, give her head a wobble, and get in the bin” while others called her to concentrate on improving NHS performance rather than staff’s grammar. 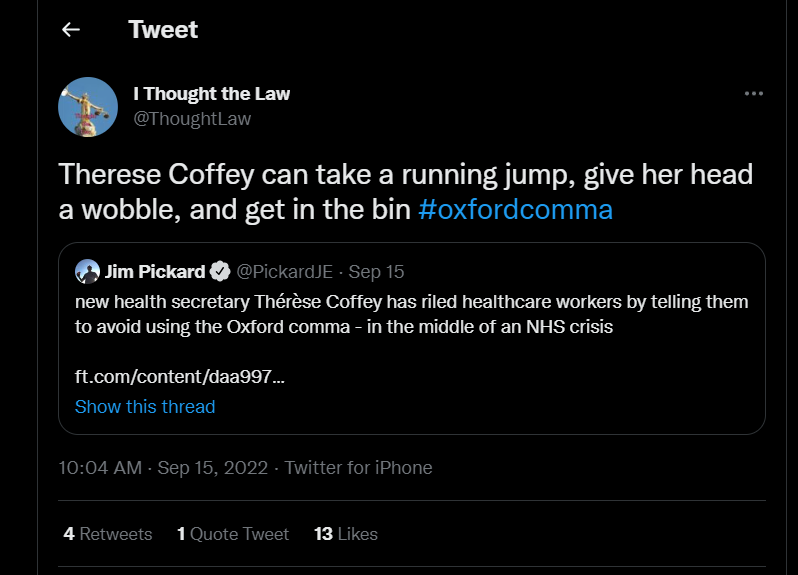 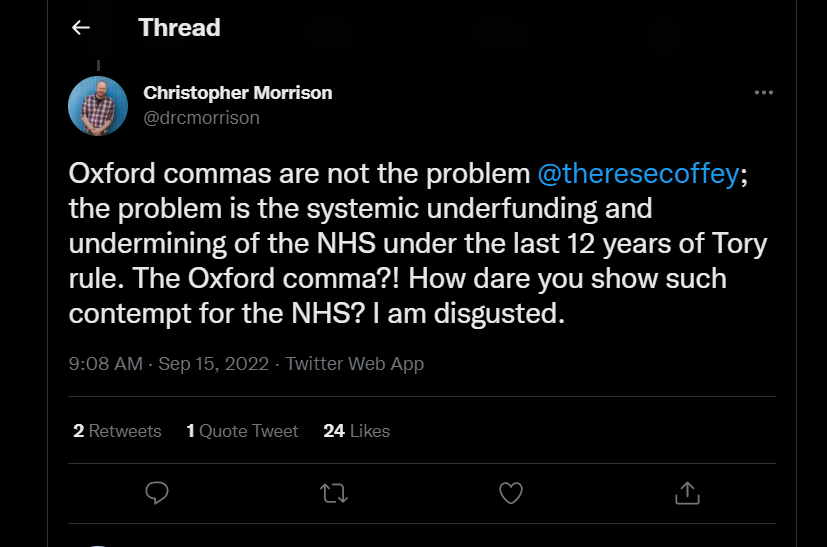 It was not only the NHS staff, patients and the general public who expressed their disagreement but also the MPs and other leaders. SNP MP Stewart McDonald said the row showed Coffey had “totally lost it”, while others said it was proof the minister was not up to the job. Ministers will inevitably have different ways of working that need to be communicated. “Leadership though is about understanding how messages will be received and their impact, particularly on a workforce exhausted at all levels and whose entire focus is on the nation’s health,” said Dave Penman, general secretary of the civil servants’ union the First Division Association.

What Is The Oxford Comma And Why Its Usage Is Argued?

The Oxford comma is a punctuation mark used by some people in between the final two items on a list of three or more things. It is used after the penultimate item in a list, usually before the word “and” or “or”. For example: “I would like a cup of coffee, a packet of crisps, and a bottle of water.”

The use of the Oxford comma is hotly contested. Its advocates argue it can make sentences clearer and remove ambiguity while its opponents argue it is unnecessary and can ruin the flow of a sentence.

Well, it is not the first time Coffey has made clear how much she dislikes an Oxford comma. The senior Cabinet minister has tweeted about her opposition to the use of it on a number of occasions. In April 2015, Ms. Coffey tweeted that the Oxford comma is “one of my pet hates”. 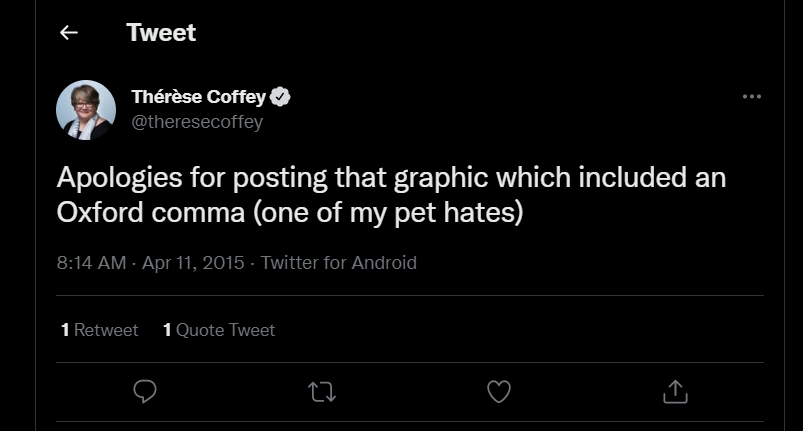 “I abhor the Oxford comma and refuse to use it,” she wrote in 2013. And in July 2011 she tweeted that “I cannot bear it and constantly remove it”.