Analysis of Clash of Civilization 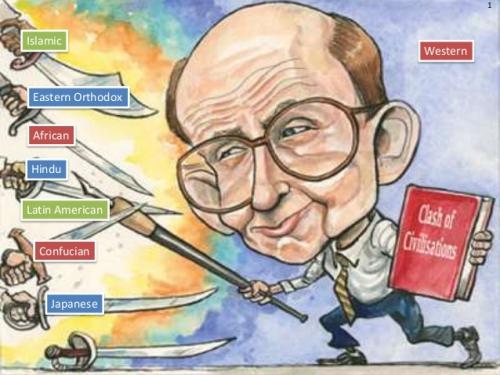 Conflicts have been a huge problem for societies. There are many theories about the formation of conflicts. One of them is Huntington’s theory. He thinks that conflicts are born out of the existence of different civilizations. He has also developed some conflict theories, including the kin-country syndrome and a hypothesis concerning new alliances. However, Alam strongly opposes these views. Conflicts are not connected to differences in cultures and the kin-country syndrome is not suitable for today's paradigms.

Huntington asserts that groups or states belonging to one civilization that becomes involved in a war with people from a different civilization naturally try to rally support from other members of their civilization. This situation is called “kin-country syndrome” Namely, countries support those countries culturally closer to them such as the relationship between Turkey and Azerbaijan. According to Huntington, kin-country syndrome plays a big role in conflicts between countries. For example, during the collapse of SSCB, great turmoil arose in its territory. One of them was between Azerbaijan and Armenia in Caucasia. SSCB supported Armenians. Turkey supported Azerbaijan because Turks and Azerbaijanis belong to the same religion and ethnicity. Moreover, In Bosnia, the UN and western countries could not prevent the massacres committed by the Serbs. However, many Muslim countries sent dozens of weapons or money to Bosnia and some countries send officers or guerrillas to save Muslim Bosnians.

Muslim countries did not act like Western countries because they are of the same religion as Bosnians, so they feel closer to Bosnians. Also, thanks to the kin-country syndrome, major conflicts between countries of the same religion and race were prevented. For instance, in 1991, there was a possible conflict between Ukraine and Russia due to Crimea but the problem between these countries of the same religion was resolved in a short time. However, according to Alam, these comments are not logical. He claims that countries having the same religion do not mean that they will not fight each other. For example, Northern Ireland and Ireland are two countries of the same religion, but they have different sects. They are very different only because of this sectarian difference and there have been very bloody battles between them. Wars based on this sectarian difference continued for a very long time in Europe and these wars caused the death of more people than wars between Muslims and Christians. Also, according to his article, of 18 major wars fought by great powers between 1600 and 1945, only six involved states from two or more civilizations, and the deadliest, which caused millions of deaths were fought among the Western States.

Huntington’s view is contradictory in many ways. He asserts that countries with the same religion support each other. However, during conflicts between Azerbaijan and Armenia, Muslim Iran supports orthodox Armenia because strong Azerbaijan may hurt Iranian interests in the Caucasus. Also, there were conflicts between the Kosovo Liberation Army and Serbian forces in 1999. Serbian army prepared to commit serious massacres against Kosovo civilians, but NATO started operation allied force. NATO forces eliminated Serbian forces and prevented a new massacre. Namely, western countries stopped Christian Serbia.

Furthermore, Huntington claims that partnerships between people of the same culture are more effective than collaborations between people of various cultures- while Alam claims that ASEAN is made up of nations with diverse cultures. Its success is increasing dramatically. Soon, it will even surpass the European Union’s economic growth. Namely, the kin-country syndrome is not reasonable. In relations between countries, factors such as culture and religion are of secondary importance. The most important factor is economic interest. States act according to their economic interests.

There have been many conflicts in the world. According to Huntington, these disputes occur due to six factors. First, different cultures, ethnicities, or religions cause these disputes. The difference is a primary factor to create conflicts. The second point is globalization because it increases the interaction between different people or civilizations. For instance, there is a correlation between the increase in the immigrant population in a country and the increase in cultural awareness in that country's citizens.

The third is the desecularization of the world because according to the author, fundamentalist countries and organizations cause horrific events. Fourth is indigenization as a result of the high status of the West. In the past, the elites of non-western societies were usually people who were most involved with the West, had been educated at Oxford, the Sorbonne, or Sandhurst, and had absorbed Western attitudes and values. Nowadays, many non-western countries’ elites have indigenized.

Nevertheless, Alam is against these views. He asserts that differences do not cause conflicts. If they cause conflicts, people will not interact with each other harmonically. Every person is different, so differences are not dangerous for civilizations. Moreover, he is against that desecularization creates disputes in the world. Contrary to popular belief, the west is as religious as the east. The English queen is also the head of the church. Also, in the past, The situation of non-Muslims in the non-secular Ottoman and Indian states was very good. These countries were even more tolerant than in some countries today. Also, he is against the that that establishes globalization and economic growth as factors of disputes. Economic growth in Asia and population growth in Islam have revitalized cultural identities in Asia and Islam. East Asia is currently the fastest globalizing and modernizing place in the world. Then the conflicts would be intense between East Asia and Western Europe but it did not happen.

Huntington says that differences bring about problems and disputes. If they cause conflict, people cannot live together because every person is different. Also, he sees the desecularization of Muslims as a threat. But according to Alam, Islam has a great tolerance for different religious communities. For example, the Christian Balkan, people who lived more than 500 years under Ottoman rule, lived in harmony with the Ottoman Empire and preserved their own culture. Moreover, globalization cannot engender disagreements. On the contrary, thanks to them, the cultures become closer to each other.

Finally, homo sapiens are constantly in conflict with each other. This is a normal situation, so conflict is inherent in human nature, but at the same time, people live in harmony. In these two cases, they nourish each other, and both will happen as long as people exist.

Huntington asserts that the world is changing. After the collapse of the Soviet Union, the poles of the world changed. There is no longer an eastern block, western bloc, and third-world countries. The conflicts that will take place in the 21st century will be civilization-oriented. In this case, there will be a Confucianism -Islam alliance against western civilization. Because these two civilizations are not very modern compared to westerners, they are closer to each other.

Western countries have long taken advantage of China and Islamic civilization. They paid taxes to the westerners and obeyed their colonial governors, but these two civilizations cannot unite against western countries because the interests of the two civilizations conflicted with each other. China is in constant trouble with the Muslim-Uyghur autonomous region and the Muslim Central Asian states. Sometimes conflicts occur between them. For instance, Chinese President Xi Jinping encouraged China's iron-handed approach toward the Uighur ethnic minority in Xinjiang province. He allegedly ordered officials to show 'absolutely no mercy' when dealing with terrorism and separatism in Xinjiang. In addition, Muslim states do not lean towards an alliance with non-Muslim countries. Also, Chinese civilization is introverted. It has rarely made alliances throughout history. Therefore, The chances of Chinese and Islamic civilization uniting against the west are quietly very low.

All in all, Huntington’s article argues that disputes are related to differences in civilizations and he creates the theory of kin-country syndrome and the theory of a new alliance of Confucianism and Islam civilization. Nevertheless, according to Alam’s article, these opinions are not rational. Hence, conflicts are a part of human nature and states do not have kin. They only have interests.