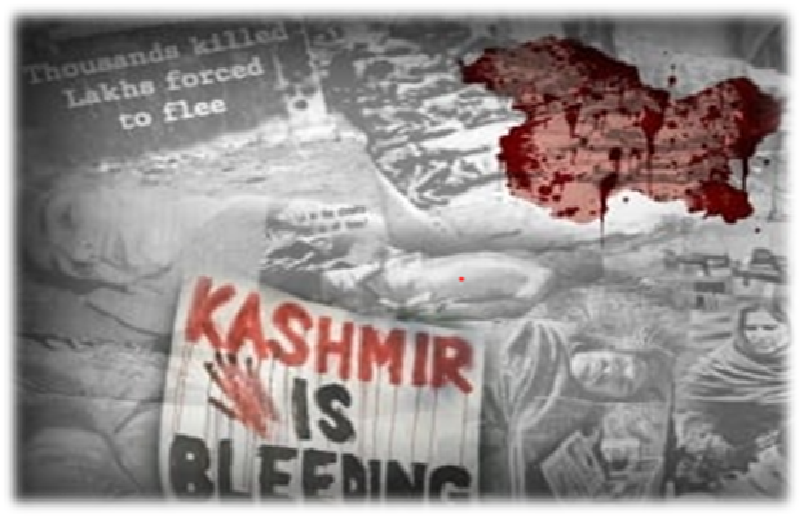 Kashmir, also known as nature’s paradise on earth, has its own dark past, made into oblivion. A past that screams a brutal genocide of Kashmiri Pandits, who have ever since been known as peace lovers. A past which still sends shivers down the spine of every Kashmiri Pandit. It is heartbreaking to learn about their unforgotten pain and trauma. Not only one generation of Kashmiri Pandits got eliminated but the agony face by them did cast its affect on their succeeding generations, thereby putting an everlasting scar on the history of humanity.

J&K was a princely state solely ruled by the Dogra rulers. After the creation of Pakistan on religious lines in 1947, it continued the evil designs to acquire the Muslim majority state of Jammu & Kashmir. Pakistan resorted to a tribal invasion which was mainly focused to eliminate the Hindu population in Jammu & Kashmir. Maharaja Hari Singh had the option to sign the Agreement of Accession with the Government of India, putting a stop to Pakistan’s malevolence.

Kashmiri Hindus and Muslims used to live in harmony. Pakistan with its wicked plans to acquire the land and waters of Kashmir, played its game of religion and started brainwashing Kashmir Muslims in the name of Islam. Arms/ammunition, training for hidden warfare and support on diplomatic/financial fronts was provided to Kashmiri Muslims to wage a war against India. By 1990s, everything was set for the big mission that started from 19 Jan 1990. The idea was simple; kill, harass and torture the Indian patriots in Kashmir, who were none other than the Kashmiri Pandits. With the support and backing of local Kashmiri Muslims, thousands of Kashmiri Pandits were assassinated. Killings, rapes, and kidnapping were common. Every effort was made to terrorize the innocent Pandits.

The Pak sponsored terrorists of which the local Kashmiri Muslims youth were a part, forced Pandits to either join in destabilizing India or convert or leave Kashmir or die. Fear became an ever present reality. Every night, a Kashmiri Pandit house was marked as a target to be burnt or a Pandit member to be assassinated. Not every Muslim was a part of the heinous mission but, the majority did remain silent and supported in execution of Pak plans and terror activities. Poor Kashmiri Pandits became the victims for no fault of theirs.

The priority of Pandit males was sending women, children and elders to a harmless place. They could sense the lust in eyes of the betrayers. No Pandit was showed any mercy irrespective of age or gender. They were subjected to the worst kind of brutality. Women were molested and then cut into pieces on wooden bandsaw. Body parts of some others were amputated. Many others were kidnapped and their dead bodies after torture were thrown into rivers. Few innocents were hanged on trees for instilling fear in others. Majority of the misguided Kashmiri Muslims used to enjoy the bloodbath of Kashmiri Pandits. Either directly or indirectly they were partners in the genocide of the Pandits. Many of the Muslim neighbours had already sketched their plans to occupy the houses & other property of Pandits and made all efforts to generate an atmosphere of fear and psychosis. Just to save their lives, Kashmiri Pandits had to undergo sudden and forced exodus from their native land and did not choose to put their patriotisms towards their nation on sale.

Simply the thought of leaving motherland where generation had lived for centuries brings tears in one’s eyes and just realize about those who actually have faced this. Leaving palatial houses with all comforts and that then restricting to a small pigeon rooms or a torn tents is really the worst kind of trauma that Kashmiri Pandits have undergone.

After their forced exodus, Pandits had to live in unhygienic conditions, devoid of essentialities for living and harsh climatic conditions. They faced both financial and emotional setbacks. Their social network got extremely thinned which resulted in untimely death of a large number of the community members, as well as developing different types of health problems. Older people were most among the sufferers. The education of Kashmiri Pandit students received a major jolt and those who were at the important stage of their life career were the worst sufferers. It shut the dreams of innocent Kashmiri children, who believed on their hard work and educational abilities.

On the cultural front, the community went centuries behind. Their rituals, customs and other social aspects got vanished in dark, without knowing the path way it would follow. Apart from being genocide of humans, it was an aggression on thousands of years of old culture. It is very sad that Kashmiri Pandits, who were the legal and hereditary natives of this country, became refugees in their own country and were called as migrants in the Government records.

Despite having suffered on all fronts, Kashmiri Pandits chose patience, spread brotherhood and didn’t resort to any kind of violence. As a result, their voices remained unheard for the last thirty years. They continued to live in a state of unpredictability about their identity, culture, customs and future. Did they really forget what happened to them? No, they didn’t. They did everything possible thing to raise their voice, but were unheard because they are peace lovers and don’t’ have any political representation. Their patriotism towards their nation and the sacrifices officered by them has no value in the political circles of the country.

Over the past 30 years, Kashmir Pandits have toiled a lot and rebuilt their lost identity after starting from the scratch. Some have moved on, whereas many are still disturbed with the memories of their forced exodus. They haven’t forgotten anything. Their memories are still full of both the beauty and brutalities of their “Panun (own) Kashmir”. Some refuse to return, whereas others still hopeful of returning and getting rehabilitated.

Thanks to recently released documentary ‘The Kashmiri Files’ which gave a very brief account of atrocities committed on the community and thus created mass awareness about some of the untold sufferings of Kashmiri Pandits. I believe this is not the end. The forced exodus of Kashmiri Pandits is a terrible tragedy and a sad part of not only the Indian history but of the world history as well.

The Kashmiri Pandit, once a highly educated and culturally rich community, is presently at the stage of extinction, if immediate steps are not taken in the interest of the community. Government of India has a moral responsibility towards the rehabilitation of Kashmiri Pandits and not to continue to look at them as refugees in their own counter. No history of genocides can be complete without making the mention of holocaust of Kashmiri pandits. The situation of Kashmiri Pandits can be well described by the following couplets authored by me:

Her gazes calling for help

For her sanity rather than safety