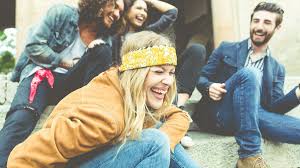 Friendships can benefit you in a variety of ways. Good friends teach you about yourself and push you to grow as a person. They motivate you to keep going when things become rough and rejoice with you when you succeed. Friends, on the other hand, do a lot more than lending a helping hand. Friendships are beneficial to one's health. Friends can help you enjoy happy moments and offer support during difficult times. Friendship prevents loneliness and allows you to provide much-needed companionship. Friendships can have a big impact on your happiness, but they're not always easy to develop or maintain.

Male and female friendship, on the other hand, appear to have different types of relationships. One is more casual (male friendships), while the other is more deep and personal (female friendships). Female friendships rely more on face-to-face contact, are more emotional, involve the sharing of thoughts and feelings, and include more support. Male friendships are typically side-by-side rather than face-to-face. Relationships that incorporate shared activities are less intimate, and transactional are more valued by men. There are significant distinctions between males and girls in how they create and maintain friendships. Male friendships are less fragile than female ones because they lack closeness. Men are more likely to bond through shared hobbies like athletics, whereas women are more likely to bond through sharing secrets, conversing, and spending time together (face-to-face). It should be emphasized that males establish friends more easily than women since they do not question the other person's motives or feel the same pressure to reveal personal details to sustain the friendship. Men are more likely to reveal their innermost sentiments with a wife, girlfriend, sister than they are with their close male friends. Women, on average, put more effort into sustaining their friendships, such as calling friends more frequently, meeting frequently, and so on. Men, on the other hand, are less concerned about keeping in touch. According to a recent study, males are more inclined than women to go drinking with friends because alcohol makes men less inhibited and allows for more emotional expression. High-maintenance relationships, whether with wives, girlfriends, or male friends, are often avoided by males. "Men don't want someone who is excessively needy," says one expert, "and women are more likely than men to harbor grudges against pals."

When it comes to friendships, men win. Women may have their best friends and share an intimate bond with them, perhaps more intimate than any man can ever share with anybody. But when it comes to maintaining long-term friendships, men nail it effortlessly. They are chilled out, easygoing, and are fun in friendship. And men never ditch a friend in need, even if it means risking their happiness.

1.      When a man refers to someone like his friend, buddy, or pal, he usually means that he will be there for him for the rest of his life. Friendships are important to men, and they believe that a friend in need is a friend indeed. This isn't to say that friendship isn't important to women. They do, of course. In a country like India, where women are frequently subjected to extreme social pressure, a lack of commitment to friendship is a result of her familial obligations and other societal restraints. Overall, however, males are more likely to go above and beyond for their buddies.

2.      While women have certain friendship dos and don'ts as well, nothing compares to the sanctity of the bro code that men follow. The bro-code, which establishes certain unspoken friendship conventions, is something that every male, even unconsciously, adheres to. Every guy upholds the bro code at all times

3.      Women may claim that guys don't disclose their innermost sentiments as openly as women do (which is true), but the truth is that men let each other be. They don't constantly step on one other's toes to share. As a result, anytime a man wants to unwind, he turns to his male friends. There is no pressure, only acceptance.

4.      Guys normally stand up for their brothers, but they don't chastise them when they can't. Males are significantly more laid-back than women. In friendships, women often have a love-hate relationship. They are willing to go to great lengths to pamper their friends, but they demand the same in return. Men aren't like that.

5.      Men rarely retain grudges against their pals for minor infractions such as failing to show up for a birthday celebration or missing their birthdays. Unlike women, men are unconcerned by minor breaches of commitment. They don't over-interpret their friends' behavior and usually give them the benefit of the doubt.

6.       Men may despise one another, but they never betray their friends' trust by gossiping behind their backs. They don't become friends with people they don't like. Of course, there are exceptions, and many men have experienced them at one point or another in their lives. They are not, however, prone to backbiting in friendship.

7.      While males are frequently accused of accumulating stuff and not revealing their emotions as openly as women do, the sad fact is that the opposite is often true when it comes to friendships. While a female may be quietly annoyed that her friend was nasty to her one day, guys normally express their feelings and don't make a big issue about it. If you don't like something, you express it right away. Even if it means a tense standoff. A few minutes of fistfighting is sometimes preferable to a lifetime of confusing feelings.

Although these distinctions do not apply to all male-male and female-female friendships, they do provide an overview of how male-male and female-female friendships differ. It is critical to establish what you are seeking in a friend, regardless of the type of friendship you are in. It might help you determine if the person you want to be friends with can create the type of connection you desire by understanding what you need and want out of a friendship.

Let Us Focus On True Friends On This International Friendship Day: 1st August

Infibulation: the practice of surgical closure of the female Vulva