Is Eating Outside Still Unhealthy? 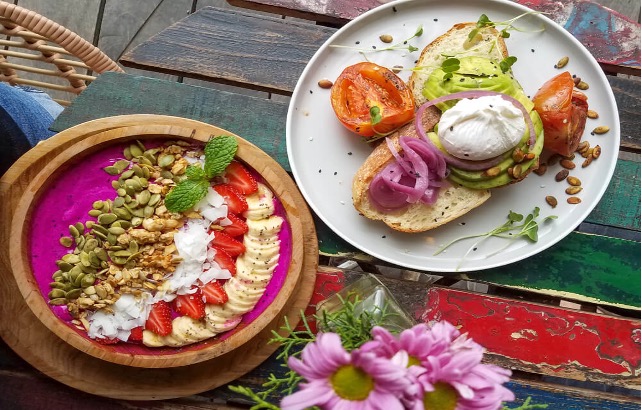 Conventionally, for a very long time, eating outside has been considered synonymous with an unhealthy lifestyle. People constantly preach in the favour of simple, homecooked food as an ideal way to maintain one’s general well-being. On the other hand, restaurants and many other food joints are associated with the concept of ‘junk food’ which carries with itself the connotation of eating garbage, or spoiled food. In fact, it would be difficult to separate ‘fast food’ from this idea of ‘junk food’ which is why the new, upcoming eateries which are based on the ‘food-to-go’ concept shy away from labelling their products as ‘fast food’. However, it would not be erroneous to suggest that the recent food trends show that the notion of healthy eating has also captured the imagination of the hospitality industry.

With increasing consciousness about one’s everyday health, brought on by the constant check-ups and monitoring of various health markers, there has emerged an innate desire in people to consume wholesome, fresh food. They are willing to compromise on taste to privilege the nutritious value of what they eat. This changing attitude has had a direct impact on the food industry which now tries to fulfil this growing demand for a balanced diet. The occasional salads and soups are no longer enough to cater to this desire for healthy eating. Instead, there has been a drastic change in the whole outlook of these dining hubs which reflect in their transformed menus. The newly designed menus heavily rely on the use of organic products, focus on a plant-based diet, and imitate homemade meals. This also clearly indicates that the emphasis has shifted to the ingredients used as these food outlets try to incorporate fresh and sustaining produce, for instance, replacing refined flour (maida) with healthier grains such as oats, quinoa, barley, and so on, or choosing natural sugars such as honey and jaggery over the refined one. A Business Today article describes this new trend as “neuro-nutrition”, which is explained as follows: “Sometimes called 'brain food', it is food that could help the brain remain healthy if taken regularly and also slow cognitive decline due to aging. Consumers are also willing to go back to basics, eating the non-fancy stuff, or what your grandmother ate”. This would mean that it is not just physical wellness that is aimed at by eating such simple food, instead, complete mind-body well-being is desired, which makes it even more imperative that the food industry capitalises on this trend.

What is even more remarkable about these new dining experiences is that they now cleverly bridge the gap between delectable and beneficial food. This is the primary appeal of these places as they try to create wholesome food which would be equally pleasurable to eat. This is achieved by working with different flavour combinations, instead of employing the means of excessive spiciness and frying things. Additionally, the food is made more appetizing by a careful presentation and well-chosen plating, which would still keep up the semblance of eating food created by professional chefs, while not compromising on the food’s nutritious value. There is also an attempt to uncover the obscure, regional delicacies of different places as the usual, generic dishes are traded for more authentic cuisines. This keeps up the excitement in the food and breaks the monotony that a person might experience in eating a similar type of food at one’s home. Therefore, these food joints must make a conscious effort in still maintaining a distance between the food that is available at a person’s home and the kind of meal that can be expected in an outdoor environment. Only by such constant innovation and experimentation, they can justify the high prices that they charge for healthy meals (which is usually the hallmark of homemade food).

To illustrate with the help of examples, one can look at two of the trending restaurants in the capital city of Delhi: One8 Commune and Fabcafe. Both are established on the idea of wholesome, soulful, and fulfilling food which is integral to their rising popularity. One8 Commune is set up by a leading cricketer, Virat Kohli, who is himself known for his fitness and healthy eating habits. This already fosters a preconceived idea in the minds of people about the restaurant’s possible philosophy of healthy cooking. The restaurant offers some obvious healthy choices such as the ‘super food salad’ and the ‘pearl barley risotto’, however, there are also interesting twists in the menu as there is a seamless binding of the healthy with the tasty. For instance, a classic, homely dish such as ‘dal khichdi’ gets elevated to the restaurant level with the addition of the ‘caramelised apple’. The healthy style of cooking is repeatedly complemented by fusion cuisines, new flavours, and twists on the classics which make the restaurant relevant to all age groups — making it a truly communal space as embedded in its name. Anshika Nagar, a food critic, in her review of the restaurant states: “one8 dabbles in many cuisines and there is something for everyone's tastes. There is a clear demarcation for vegan and vegetarian and the first page lists out the cricketer's favourites”. Nagar, therefore, highlights the dual focus of the restaurant on both healthy, plant-based dishes and an appealing, multiplicity of cuisines.

Fabcafe, a casual dining venue, has strategically chosen its premises in a large park, surrounded by luscious trees, a beautiful lake, and a lot of open space. Such a natural environment further facilitates the idea of a place providing a nourishing experience. Sunder Nursery, where the restaurant is located, hosts, every Sunday, an organic market selling fruits, vegetables, and even prepared delicacies, and this contributes to the restaurant’s appeal as a healthy haven. Even the menu revolves around using natural and healthy ingredients in everyday dishes, finding viable alternatives to the traditionally used ones: ‘sprout veggie bhaji’, ‘beetroot idlis’, ‘quinoa jhalmuri’, and so on. Harleen Kalsi, in her review of the restaurant, praises Fabcafe: “After a year of being cooped up in our homes, all we need is a good, healthy meal amidst clean, verdant surroundings. If you think this is impossible to find, especially in the middle of a pandemic, then Fabcafe by the Lake in Sunder Nursery, New Delhi, is the place to head to this season”. The restaurant’s success is made up of an interplay of natural surroundings, a holistic menu, and nutrient-rich ingredients.

It would be safe to claim that there is no longer a clear-cut binary which marks homecooked food as healthy and the food eaten outside as unhealthy. There is an emergence of food establishments which cater to the needs of their health-conscious customers. At the same time, these food joints are not lacking in terms of taste and presentation, as they still deliver a restaurant-style experience to their diners. With the abundance of avocado toasts, acai bowls, multigrain bakeries, and leafy salads on the menus of many trending restaurants, it can be said that this healthy transformation of the food industry is becoming very extensive and pervasive. Post-pandemic, this trend would continue to rise as people are more concerned about their health than ever before, and they are more likely to make healthier lifestyle changes with which the food industry has to keep up. It is true that this is still largely an urban phenomenon, as remarked in a The Restaurant Times article: “All in all, since healthy food trends are still largely an urban thing, the restaurant industry is trying to bring their best to make the people aware of the changing trends”. However, it would not be amiss to assume that the prevalence of such eateries serving healthy foods would only increase with time and would eventually become commonplace.