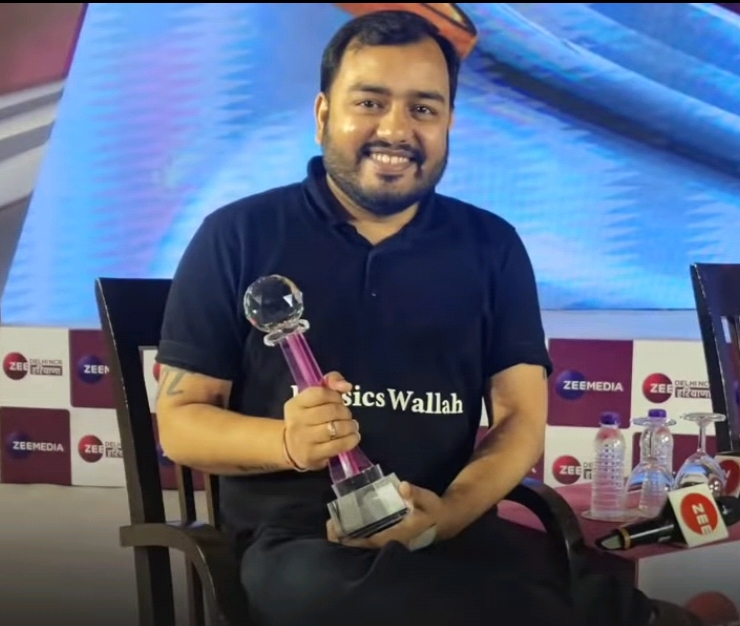 Alakh Pandey was born in a middle class family. He was into studies and loved physics. He was into teaching and acting from school days. He started teaching and giving tuitions from class 8th onwards. He liked dramatics, participating in nukkad natak etc. He got a good rank in UP district entrance exam and then got admission in one of the best colleges of UP. Having a deep interest in physics but lack of knowledge about engineering streams , he opted for mechanical engineering without second thought. Again he topped his branch in physics. But he felt that no practical work was being taught or learnt in the college. He got to know from his seniors and friends  that there exists a great difference between whats taught in colleges and what mechanical engineering  jobs are. He had started giving tuitions from 2nd year of college and found it fun sharing his knowledge with others. He used to hate the concept where children used to study one day prior to the exam. He had always believed in consistency and persistence. Time and again,he started liking giving tuitions more than learning in college. So he dropped out of college. In the beginning, his parents were apprehensive of his decision. They trusted him but were worried of his choices. But with time they became acquainted with risk taking habits.

Starting from offline coaching, he switched to youtube to reached a bigger and wider audience. It was in year2017 when he started getting his deserved attention and few years down the line became the most talked about teachers on entire youtube. On youtube, he posted videos of every tough topic and thereby, made it seem so easy. With time many transitions occurred; from green to red walls to smart board and from black markers to smart pen.

Few years ago, attracted by his popularity; Unacademy made an offer that it hoped the Allahabad based teacher wont refuse. But he refused to be a puppet and rejected an offer of 40 crore, thereby paying full attention to his fast growing youtube channel. Due to his repeated hardwork and will to provide quality education to all, he took all difficulties and challenges in his stride and continued doing what his heart wanted. He didn’t lose hope. Finally Alakh pandey got awarded Education Excellence Award by Delhi’s CM Arvind Kejriwal.

He was satisfied teaching on yotube. But then pandemic happened and compelled him to take a step ahead in world of online teaching. Then he launched Physics Wallah app formally in june2020. Within days after its launch, it started trending as one of the most downloaded app. It, already being expanded as a website and mobile app, has also grown in a lump sum of youtube channels,each serving different purpose. These include JEE Wallah, Competition Wallah, PW-English, PWBangla among others.

He launched an App named Physics Wallah along with a website where free study material and assignments for all chapters and 3 subjects PCM were available from 10 to 12 class. There he used to post videos teaching difficult topics with ease. He started with covering few topics to covering difficult chapters to now covering all three subjects. I had enrolled in the first Lakshya batch that covered all PCM with proper preparation. I got a decent rank in JEE. I  was even enrolled with VMC for  a 2year integrated course. But I left it in between cause I couldn’t understand much. Their main focus was to give homework question and focusing on the already top students in the topper batch. No proper importance was provided to teaching and learning of concepts. Tired, after our batch  was nearly over, our Maths and Physics teachers quit VMC to pursue regular  9 to 7 jobs. Although I didn’t continue btech, still it was one of the best learning experiences in my entire life. Now Alakh Pandey stands unbothered at youtube with 68.4lakh subscribers with channel name as physicswallah-alakh pandey and over 1.2 billion views.

He now runs an edtech worth a billion dollars. His app started started with 4 batches and now extends to many batches for different students. His batches are economical as well as present students with high quality education with a dedicated timetable. His students are not limited to India, but also engulf all neighbours of India like Pakistan, Nepal, Bangladesh. . It has grown to be India’s fastest growing education platform keen on providing an online platform for JEE and NEET preparation at affordable prices. Its maximum package is of Rs4000, a tenth of fees demanded by other edtech giants like VMC, Unacademy, BYJUs etc.

I remember watching his videos and being in awe of his teaching. He goes in depth of each topic and tries to create interest in the subject. He can make you understand any concept easily tough followed by every approach to solve the question. Now he has more teachers to support and provide assistance in other subjects. They are all selected by Alakh Sir and are just like him-humorous and quality teachers.

Physics Wallah is in the opinion of expanding and diversifying  its operations. It plans on launching K-12 segment i.e kindergarden to class 12 segment. Starting along with his 3 friends, the platform now stands with more than 1600 members. The recently founded edtech is increasing its work force.

Alakh Sir surely has a inspirational journey.  You need to take risks, challenge yourself, and try harder if you want to grow stronger and become better. He wanted to create a difference, a revolution. A way through which maximum students can get benefit. Fame brings responsibility. Choice of words play in important role in addressing students and parents doubts, confusions and choices . Further, he plans making PW app available in multiple languages so that education is available to all students who want to study. “If you find science boring, you are learning it from wrong teacher”.

He credits his achievements and excellence to his students and supporters. He says, “my students inspire me, that’s what keeps me going”.

Syrians in Turkey: Where are they going?