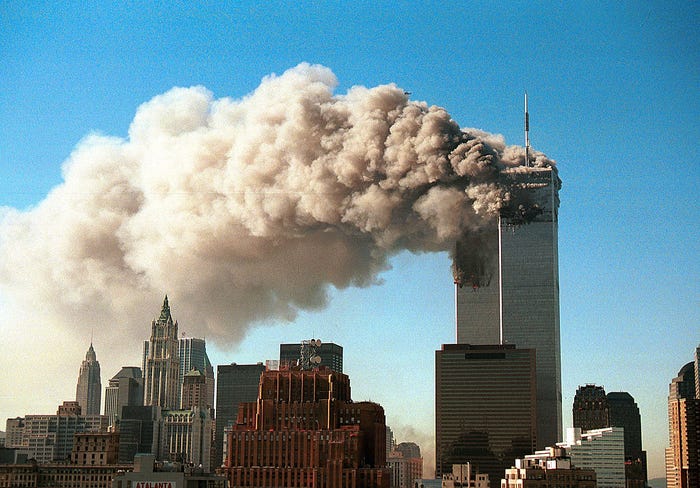 On 9 September 2001 around 19 militants associated with the Islamic terrorist group of Al-Qaeda hijacked the 4 airplanes and attacked the two largest buildings of New York. Famously known, the Twin Tower of World Trade Center in New York was attacked by two planes, the third plane attacked the Pentagon which was outside the White House D.C., and the last fourth plane was crashed in the field of Shanksville, Pennsylvania.

In this attack, 2,996 people died including 19 terrorists and more than 6,000 others wounded. The people who died were from 76 countries who were working at the World Trade Center. At the time of the attack, President George Bush was in Florida.

At 7:59 am, Flight 11, a Boeing 767 carrying 81 passengers and 11 crew members, was hijacked by the militants and it was used to attack the World Trade Center.

At 9:45 a.m, the third flight American Airlines Flight 77 came across and crashed into the Pentagon military headquarters. Around 125 military personnel were killed and 64 people were on the flight.

All the firefighters, police officers, and ambulances had to go to work to save the many people in the towers. Hundreds, maybe thousands, of people died because of that fateful tragedy.

After this, the attack was everywhere on every news channel, Radio, etc. Soon after this people understood that America was under attack. This attack caused thousands of innocent people to die and after the attack too. Some people died in the attack and some died because of depression or some other reason.

On the afternoon of the same day of the attacks, George W. Bush addressed the American people, saying that: "Terrorist attacks may have shaken the foundations of our largest buildings, but they cannot touch the foundations of America."

The whole New York air was covered with sugarcane. Buildings began to collapse on the streets. Thousands of people were trapped in buildings, but parts of the building began to fall on those on the roads. It is not known if another plane will come back and attack. The whole city cried. The footage was live by News Saddles from the US. The next attack took place by a margin of a few hours. But this time not on the Twin Towers, but the Pentagon, the military headquarters of the United States. Not only the United States, but the whole world froze.

After the attack within the month, America had invaded Afghanistan, and it was the longest war between the two countries. US-launched war attacks in Afghanistan (7 October 2001) and Iraq (20 March 2003) respectively, in the context of the War on Terror.

The day came when all Americans were happy and delighted with the news of Osama Bin Laden's death. On May 2, 2011, U.S. Navy SEALs killed him by the operation "Operation Neptune Spear", the man who killed 3000 innocent people by attacking the World Trade Centre. The manhunt launched against him in Afghanistan did not yield results, and he continued to target his followers and enemies via taped messages until 2011 when he was executed on the spot during the raid by American commandos on his home in Pakistan.

They shot Laden where he lived with his family from Waziristan at his residential compound in Abbottabad. Under the governance of President Barack Obama, he was shot.

People started chanting the USA USA USA...  at the night outside the White House when President Obama announced Bin Laden was dead.

The shock, the uncertainty of what might be coming next, and feeling the need to be comforted by being close to loved ones. Just like night and day, the light and darkness of this world run hand-in-hand. That which we call evil is always present however goodness always overshadows the darkness.

Nearly two years after the attacks, a memorial and museum now stand where the Twin Towers fell. The names of every person who died in the attacks on September 11, 2001, are written at the Memorial exhibition, also called Memoriam.

The day when the attack happened there was one lady named Mercy Borders. She used to work at the Bank of America as a legal assistant, which was located in the World Trade Center. When this incident happened, she was working there. She was working on the 81st floor inside the North tower at the time of the attack. She survived but later on in life she was diagnosed with a decade-long depression which led to her break up with her partner and lost custody of her children and an addiction to drugs and alcohol. But later she was diagnosed with stomach cancer on 14 August. She believed what triggered her having cancer was the toxic dust she was exposed to when the World Trade Center collapsed. And on August 24, 2015, she died.

On that day many people were being saved. Some company head has survived because he has to drop his son off at school. Another man was alive as it was his turn to bring donuts for his colleagues. One woman didn’t reach her office on time because her alarm clock didn't ring on time. One person was late because he met with an accident, some missed the train, some missed the taxi, some couldn’t get the taxi. Someone went to the drugstore to buy a Band-Aid. Some of the other ways they were being saved from that attack.

We still admire and look up to the people that saved us. They are everyone's heroes. This attack was the biggest Terrorist attack on the United States of America which can never be forgotten.

The attacks of 11 September 2001 were the largest terrorist attack to have occurred so far. Every year, people honor, mourn and remember those that lost their lives in that attack.