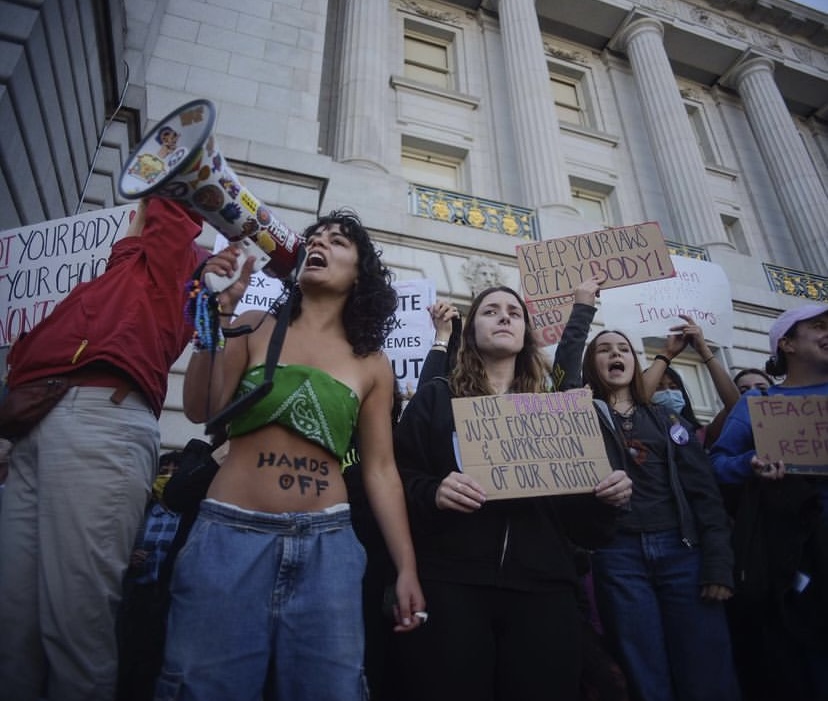 On 24 June, the US Supreme Court overturned the Roe v. Wade decision, which means that women's right to abortion will no longer be protected by the US Constitution, sparking protests across the country. On Twitter, the hashtag #sexstrike was trending on the platform. They said, “We can't risk pregnancy until women are legally in control of their own bodies.” “No more sex with men unless Roe v. Wade is protected.”

I'm sure that this June, many of us, having been hit hard by the Tangshan attacking in China, were struck down again last weekend by the overturning of Roe v. Wade by the US Supreme Court. Reality is stabbing into our daily lives with increasing frequency. The road to women's rights is long and difficult, but collapse and regression seem to happen overnight.

Under male discourse, women have sexual shame, women have abortion shame, and women are fragmented as objects and thus lose their voices. In a patriarchal society where men are a homogeneous and coherent presence, women are destined to be fragmented, assigned and destined to become a kind of male complement. In intimate relationships, men also often describe the state of two people as “women are like mirrors of me” or “she is the other half I lost”, while the subject behind this “mirror” and “other half” is essentially the man himself and the amplification of his sense of self. It is questionable that when faced with the issue of abortion and anti-abortion, are there people who are often fraternal enough to perceive even the pain of a single embryo, who cannot feel the pain of the many, many women in the real world? Conversely, can they really perceive the pain of an embryo when they refuse to perceive even the specific pain of a living human being?

We hope that, while situating the discussion of the anti-abortion bill within a grand political framework, in the tug-of-war between states’ rights and federal rights, and the increasingly partisan battles in the United States, the encounters of specific women can also be seen and the voices of particular women heard. Because macro and micro, both are political. We should go even further, we want to question the division between the macro and the micro, we want to ask who made this division, who drew a clear line between parliament and the maternity ward, defining the former as “political” and the latter as “non-political”? When people go to analyse the way a state works or a social system, they must look at who it serves, who benefits from it, whose rights are protected and whose rights are undermined. They may simply be trying to determine their right to speak and dominate, and the pro-life wording can make them appear more righteous.

It is significant to note that in both abortion and anti-abortion, the responsibility of a significant subject of this: the man’s responsibility, disappears again. As Chizuko Ueno (上野 千鶴子) writes in Misogyny: “Most women become unwed mothers simply because the man who is supposed to become the father runs away or denies the responsibility due to him. Many of them are victims of patriarchy. It is the usual modus operandi of the perpetrators to blame the cause on the victimized.” People can see that under this social control, women’s bodies and rights are compromised and the life of the foetus takes precedence over the life of women.

There seems to have been a double standard in society regarding this anti-abortion thing. For many advocates of the anti-abortion movement, what they are defending is a family value, namely the moral threat and degradation that abortion can cause. But the anti-abortion movement itself does not involve the regulation of ‘sex’ itself. If one traces the biological process of pregnancy, specifically, the sexual act - male ejaculation - pregnancy - childbirth, it is a whole biological process and chain of completion.

But the most direct break in the anti-abortion movement is that it does not regulate the existence of sexuality, but rather pregnancy and childbirth. This means that the process before male ejaculation can be called ‘free sex’, while a woman who becomes pregnant after the sexual act is over can easily be defined as indecent and unloving. If a woman is not ready to have a child, it becomes a symbol of cruelty, callousness and heartlessness in this context. When we look at regulation and control on a national and political level, men are always outside the rage of this anti-abortion movement, and the so-called ‘Boys will always be boys’, seems to be a logical restraint on women's sexuality, and one would be shocked if men were treated in the same way. It may seem strange to put men and abortion in the same discussion, but it is even stranger not to because, without men, women would not get pregnant.

Just as we talk about sexual harassment and the pain of childbirth, we want to break down the “abortion shame” and the moral stigma that has been imposed on women by society and culture for so long, and we want women to find their language and form a connection through their words.

At the same time, we should not forget that the anti-abortion movement regulates women's bodies and their wombs, but not the other party to the act of conception - men. In a patriarchal society, men are a homogeneous and coherent presence, while women are destined to be divided, assigned and destined to be a kind of male complement. Whether it is the right to be safe from harassment in public spaces or the right to abortion in my body, what women want to fight for is nothing less than the right to exist as complete and coherent human beings like men, to cease to exist as fragments, as objects that provide sexual pleasure and sexual delight, objects that provide the womb to nurture babies and objects that provide emotional value and nurturing services.

And we, for our part, still have a long way to go.

How Have Traditionally Christian European Countries Reacted to Roe v. Wade Being Overturned?