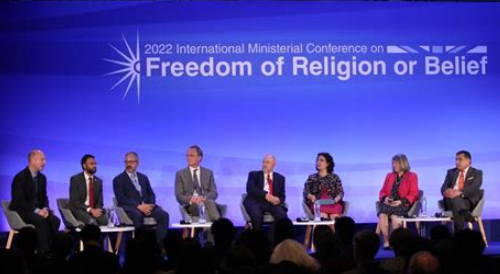 Months after the American Supreme Court overturned Roe v. Wade, ending the national standard for accessible abortions, the effects of this decisions are still felt worldwide., the effects of this decision are still felt worldwide. The latest country under scrutiny is the United Kingdom, following the release of a statement from the International Ministerial Conference on the Freedom of Religion or Belief, held in the country in early July.

The International Ministerial Conference on Freedom of Religion or Belief (FoRB) took place in London on July 5 and 6, 2022. Its primary goal was to “strengthen international efforts to ensure freedom of religion or belief.” To this end, the Conference reunited parliamentarians and government officials, as well as experts of religion and beliefs, to prevent violence and abuses and protect the human right to worship freely.

Shocking as it seems, not everyone is free to worship and participate in religious activities in the 21st century. Conferences, such as this one, are still crucial to ensure religious freedom for all. However, the scandal broke out following the concluding statement issued by the UK government after the end of the Conference, since Norway, the Netherlands, and Denmark refused to sign it. Said statement focused on gender equality and non-discrimination of women concerning their religious beliefs.

The United Kingdom delegation removed the mention of the protection of women’s sexual and reproductive rights from the final draft of the statement. The Foreign, Commonwealth and Development Office (FCDO) has clarified that the change was made in pursuit of a broader consensus between signatories to clear “a perceived ambiguity.” The original version of the statement, signed by twenty-two countries, included a commitment of the participants to remove laws that “allow harmful practices, or restrict women’s and girls’ … sexual and reproductive health and rights, bodily autonomy.”

Labour and Conservative leaders have spoken against Tories, who pushed for this removal. Caroline Nokes, the Conservative chair of the women and equalities select committee, has asked potential new Tory leader Liz Kruss to explain “this sudden backtracking on women’s rights.” Likewise, Labour’s shadow international development secretary, Preet Kaur Gill, has called the measure “yet another attack on human rights from a government whose global reputation has already been tarnished.”

Those who drafted the original statement during the conference highlighted that the measure was not problematic. Still, the issue was that the UK removed the paragraph after the FoRB meetings were over. If the concern had been raised before the end of the Conference, the attendees could have worked together on a solution. The FCDO has stated that “The UK is committed to defending universal access to comprehensive sexual and reproductive health rights and will continue working with other countries to protect gender equality in international agreements.”

Nonetheless, it is evident that the echo of Roe v. Wade still affects international politics. Currently, the right to abortion is guaranteed in the UK, except in Northern Ireland, where few clinics offer this service. It is unclear how this will change in the upcoming months, especially following Boris Johnson’s resignation. For the time being, the person or committee responsible for the change in the statement remains unknown.