Children’s Animation As The Cure to Bigotry 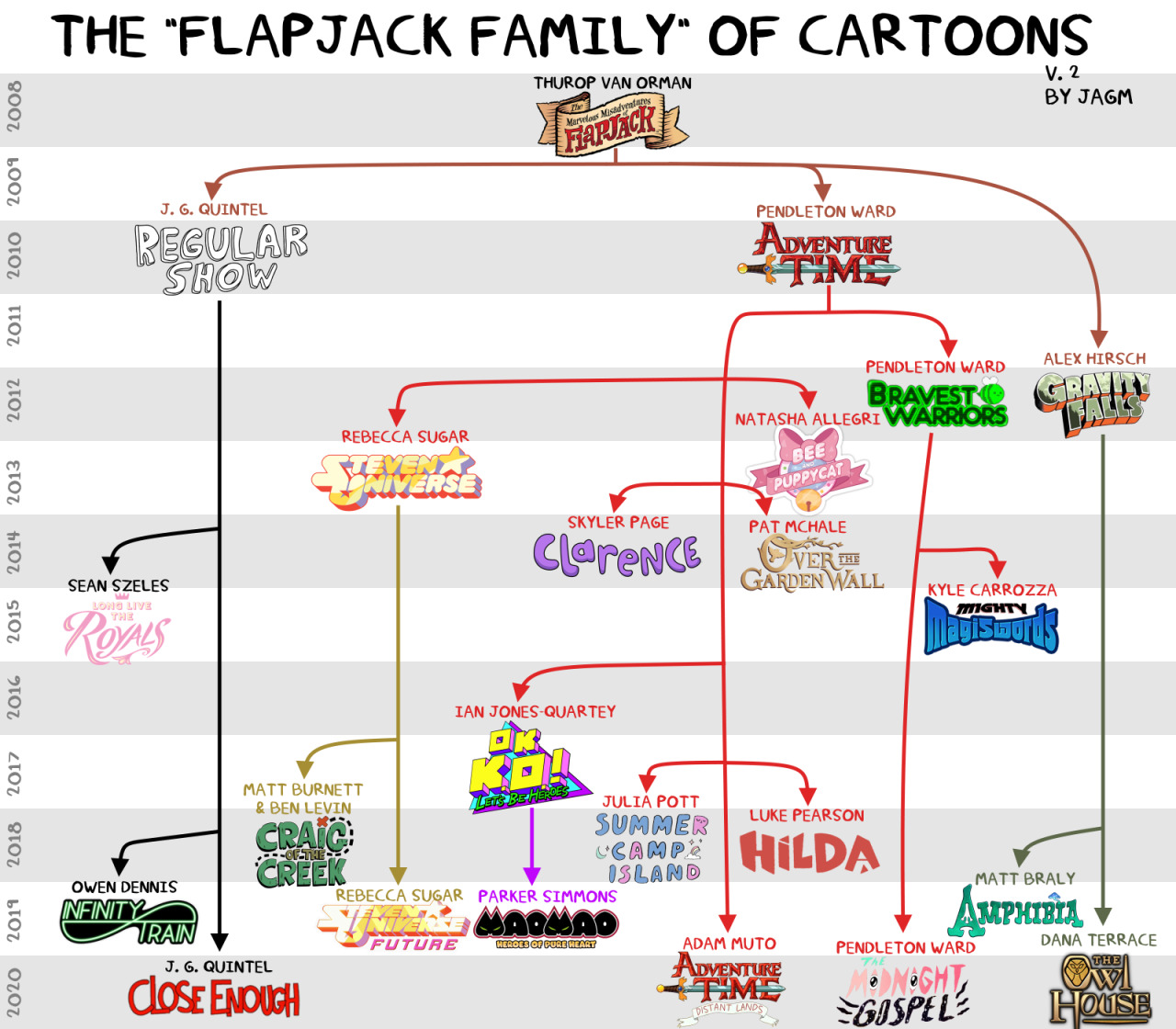 Whenever cartoons are discussed in an adult environment, they are perceived in one of two ways. Considering our familiarity with cartoons, they have been shrouded with love due to nostalgia. Conversely, cartoons are also considered immature due to their target audience being children and thus insignificant. Nonetheless, a set of shows, referred to as the Flapjack Family of Cartoons, have received unique acclaim for the quality of writing, refreshing representation of marginalized groups as well as their dedication to being inclusive. While skeptics and opponents write off cartoons as nothing more than mindless entertainment to amuse children, there are prolific cartoons that not only entertain but educate.

On June 10, 2021, Reddit users created a thread with an infographic dubbed The Flapjack Family Of Cartoons, detailing the relationship beloved shows such as Adventure Time and Regular Show have with Craig of The Creek and Amphibia. Many users were ecstatic about the connection among the shows, the creators, and the themes expressed. Rather than the similarities of the shows being a coincidence, this network seemingly confirms the existence of a genuine working relationship between several writers dedicated to equipping children with information on how to remedy interpersonal relationships, foster self-confidence, and appreciate the diverse world that lies before them.

The brightest commonality between the cartoons listed is their emphasis on inclusion and conflict resolution through communication rather than violence. Shows like Steven Universe and Regular Show manage to balance the mundane and the magical to accurately depict how life feels. Events as normal as a birthday party or a work day may seem simple and boring, but these shows manage to make light of the intricate nuances of these events. Emotions such as fear, anxiety, envy, and disappointment are dissected with the same care and diligence as overlooked experiences of happiness, pride, and admiration. While Steven Universe’s childlike environment does not mirror the mature humor of Regular Show, running tropes such as Mordecai and Rigby’s job at the park and Steven’s shenanigans in Beach City provide their audiences with a relatable yet fantastical life experience with a variety of characters.

For instance, Steven Universe has been heralded as children's animation’s first explicitly queer program, weaving storylines about friendship, appreciation, and diversity to not only normalize but celebrate the diversity of individuals and families in real life. The episode Fusion Cuisine explores the complexities of families, juxtaposing a nuclear family of color with that of a blended family. By having Steven and Connie’s families interact with one another, the showrunners perfectly capture the feelings of anxiety and particular envy that both characters display. This envy is not malicious but rather innocent envy of the other person’s family dynamics. Steven envies Connie’s seemingly perfect nuclear family: consisting of two educated, heterosexual parents, while Connie envies how Steven’s family continues to validate him and his experiences, explicitly showing interest in his values and being considerate towards his emotions.

Furthermore, the existence of Fusions not only provides audiences with positive queer representation but also works to deconstruct the myth that queerness is a form of deviance or mental illness. The relationship between Ruby and Sapphire is treated with immense care and depicted as a real romantic relationship. The two often quarrel but always resolve the conflict through honest communication, being vulnerable toward one another. While both characters are femmes, the depiction of their relationship serves as a blueprint for healthy, functional relationships regardless of sexual orientation.

The portrayal of queer relationships and characters has also been explored in Craig of The Creek, where Kelsey, one of Craig’s best friends, develops an innocent crush on Stacks, a girl from her book club. In Fire & Ice, viewers see Kelsey struggle to articulate her feelings for Stacks in the way that a boy would stumble over words when trying to compress his crush. While the episode could be considered a heteronormative depiction of a queer crush, queer viewers especially would resonate with the relationship as it was depicted for one of two reasons. Most queer people, regardless of their nationality,  have not had the luxury of developing open, innocent crushes compared to their heterosexual and cis peers. Thus, Kelsey’s hesitance is normalized as a common experience for children but also provides additional context on how homophobia in the Western world complicates “simple” or “normal” experiences for queer children.

Moreover, shows such as Craig Of The Creek, The Owl House, and Amphibia have dynamic leads of color. These leads are great representations because of their honest and humanizing depiction of children of color. Craig Of The Creek’s slice-of-life disposition provides black children with the main character that is multi-faceted, kind, and curious. Craig’s unique optimism and kindness are traits that are celebrated by his peers and viewers alike. His friends pour back into him what he pours into them, and the audience gets to see the black nerd archetype come into fruition with care and compassion on behalf of the writers.

Much like Craig Of The Creek, Anne of Amphibia is a passionate, courageous female lead of Thai descent. Not only does her characterization bring life to the many real Southeast Asian women, girls, and femmes that are not pigeonholed into the damaging silent, smart and submissive stereotypes Asian women are subjected to. Anne’s dynamic characterization comes through in the way her personality progresses for the better. Through the various lessons she learns about family, friendships, and community, Anne grows to become a more compassionate friend who has accepted accountability for her past mistakes.

Luz, of The Owl House, is an Afro-Dominican adolescent who provides Latine children with their unique addition to the magical girl genre. Unlike Harry Potter, Luz’s adventures are both child-friendly and inclusive. Luz is Disney’s first bisexual lead character, and her relationship with Amity provides audiences with their wholesome enemies-to-lovers trope while the pair fight off against an evil overlord. Like every great fantasy series, the protagonist leads a rag-tag group of friends that soon evolve into a chosen family. The Owl House is no different. Feeling isolated at home, Luz struggles with finding a wonderland that fills her with so much purpose and remedying her feelings of isolation while considering the feelings of her mother.

While they have a great relationship, Luz constantly fears what her mother will think of her venturing throughout the Demon Realm with familial figures such as Eda and King. The latter three especially bond over their differences which mirrors how people from marginalized communities tend to gravitate towards one another due to shared experiences of discrimination and ostracization. This special dynamic provides crucial nuance to discussions about familial relationships. Much like Luz and Camila, some children may not be willing to open up to their parents despite the latter’s attempts to get to know their child. This particular storyline reassures parents who are doing their best that their child’s reluctance is one, not a fault of their own, and two, does not go unappreciated.

Despite the strides made in children’s animation, there appears to be a relentless campaign to silence the voices of inclusive showrunners. The backlash against diverse content in children’s media stems from a faulty claim to protect children from mature themes. Showrunners of the animated action series Mysticons expressed their concern with Nickelodeon’s decision to tamper with the character’s storylines and relationships for the benefit of their conservative partners and audience members. Nickelodeon’s apprehension stems from their fear of a “conservative backlash” that has seen a recent uptick following the 2016 election and the mobilization of the religious right and the alt-right. From supposed concerns about the safety of children, inclusive cartoons are seen as a form of indoctrination.

The argument hides behind the idea that queerness in children’s animation will influence children to become queer when plenty of reputable researchers and queer voices made valid points. Living in a heteronormative world where children have been exposed to childhood romances on television and real life did not “turn children straight” but instead forced them into hiding out of fear of being removed from their families either emotionally, physically, or violently. Heterosexual children, on the contrary, have never been demonized or ostracized the way their queer peers have. Thus, the false equivalency does nothing more than try to frame love and sexuality as a rigid system with only one accurate form of conduct. Using Disney’s Gargoyles as another example, writers Abbey White and Kalai Chik concluded that networks prioritized “parental reactions” over the legitimate research that informs decisions regarding inclusion in children’s entertainment. While plenty of people understand the importance of a parent’s role in their child’s security, there is a failure to recognize bias that may exist in the parent. That bias can range from a hushed uneasiness with queer content to blatant homophobia, transphobia, and racism.

Ultimately, what makes the success of these cartoons exceptional is the way their viewers are educated. The lessons are not drilled into the head of the audience, nor do they reiterate surface-level slogans that fail to solve interpersonal conflict and help remedy societal oppression. While children should be protected, as many self-proclaimed family activists believe, children should also be recognized as human beings with feelings, ambitions, and an ever-growing curiosity. People commonly state that children are not born bigoted but raised to be bigoted. Animation dedicated to educating children about the world around them should be celebrated as well. These shows provide solace and inspiration to children growing up in marginalized communities or harmful environments. The showrunners of these series may have come into the writer’s room with some awareness of what their shows could contribute to conversations both controversial and necessary. Yet, the enormous impact of these series will forever reside in the hearts and minds of their audiences regardless of age, identity, and location.

Let's Reminisce About The Old Days With 14 Cartoons

Nostalgia: What is it, and Why Does it Make Us Feel Bittersweet?