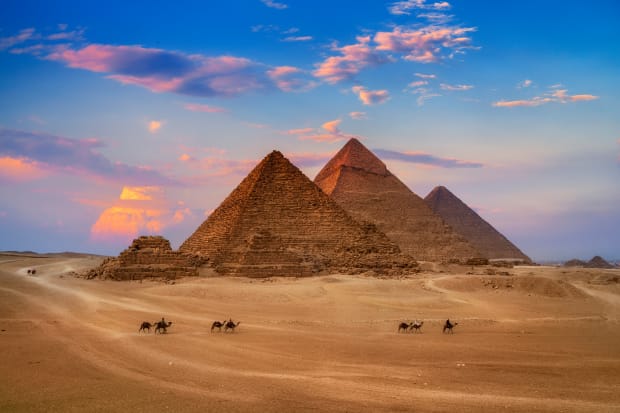 The Great Pyramid of Giza is the largest pyramid in Egypt and one of the largest structures ever built by man. It is so big that it is visible from space! It was built around 2560 BC during the reign of King Khufu of the Fourth Dynasty. However, the largest of the three pyramids of Giza is the Great Pyramid. It is also the only surviving ancient wonder of the world. It was built in the shape of a giant step pyramid with four smooth sides and was made of about 2.3 million limestone blocks. The Great Pyramid has a height of 146 meters, a width of 230 meters at the base, and a slope of 51 degrees. So how was it built so long ago without the help of modern-day technology?

How the Egyptians built the pyramids is still a matter of debate among historians. Several theories attempt to explain how these magnificent structures were built, but there is no doubt that they required significant engineering skills.

The ancient Egyptians believed the heavens were made up of five ‘elements’ called air, earth, fire, water, and spirit. These elements were the source of all life and played a role in the afterlife. Thus, the four sides of a pyramid were built in the representation of the earth, water, fire, and air elements so that the spirits of the dead could be transported to heaven through the heart of this structure. The Egyptians believed that the dead king would ascend to heaven on his throne and become immortal. So, each pyramid was designed to reflect the same order as the earthly elements of earth, water, fire, and air.

Moreover, according to archaeologists, the structure of the Great Pyramid reflects the key principles of Egyptian architecture. It has four main chambers: the King's Chamber, the Queen’s Chamber, the Osiris Chamber, and the Gallery of Princesses, and an internal cavity called the Grand Gallery that connects the four chambers.

To build these structures the Egyptians used wooden ramps to position huge blocks of stone on top of each other and gradually form the pyramid. Once the foundations were completed they built up the sides using smaller stones to form decorative patterns around the walls. Some of the walls were decorated with images of animals, gods, and other symbols associated with ancient Egypt. The stone blocks in the pyramid weighed up to fifteen tons and had to be carefully lifted into place by workers using a pulley system. While the interior of the pyramid was filled with sand to help stabilize the structure and make it resistant to earthquakes. Over time, the sand was removed to reveal the inner chambers.

There is also evidence that the ancient Egyptians used hydraulics in construction much earlier than previously believed. A team of British and Irish researchers analyzed silt from the Nile and found that it contained traces of calcium hydroxide, which is a chemical present in some modern concretes. This suggests that ancient Egyptians were making hydraulic mortar by mixing chalk with mud as far back as 4000 BC. This chemical mixture functioned as glue to hold the blocks together and helped to strengthen the building's structure. The ancient Egyptians also used powerful steam engines to lift large stones to build the pyramids - incredible technology for the time!

What is more, according to previous studies, an ancient Egyptian architect called Imhotep built the Great Pyramid as a tomb for King Khufu. It is believed that Imhotep planned the layout of the pyramid and carefully measured the distance between the outer and inner chambers so that he could construct the monument without the use of a compass or a ruler.

Ancient Egyptians were able to build this sophisticated structure by using a series of levers and pulleys to move the stones into position. They raised some of the blocks using only the strength of their muscles, but others required heavy machinery. By combining different lifting techniques, they were able to construct the highest and largest of the three pyramids in less than ten years.

As with most construction projects of the ancient world, a major setback was the heavy rainfall during the winter months which prevented the builders from completing the work. Despite this, they still managed to complete the pyramids by 2560 BC.

Furthermore, hieroglyphs can teach us about our history. We can look at the Egyptian hieroglyphics and learn some basic information about our history and gain insight into things in the past, the social norms and culture of the time, how the Egyptians celebrated certain occasions, and the beliefs they had about life and death among other things. Studying hieroglyphics helps us learn about the history of the ancient Egyptian civilization and how they lived their lives.

There are several theories about the construction of the Pyramids. Some people believe the pyramids were built with help from aliens. . Then the theory was a man built them based on the carvings in the buildings. Then came a theory that giants constructed it. Tens of theories have been made over the years as to the method by which the great pyramids were built. However, little research has been conducted to verify these claims and a definite answer remains elusive to this day.