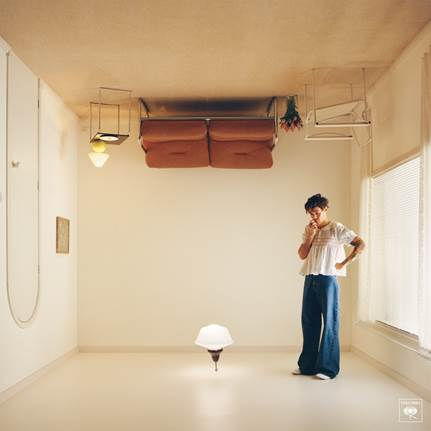 Harry Styles’ much anticipated new album, Harry’s House, was released on Friday. It’s the follow-up album to 2019’s smash hit album Fine Line and has come right off the back of his pandemic-delayed world tour. You would think that the timeline of touring, writing, and recording to simply get back out on tour again would exhaust an artist. How would they be able to tour an album while simultaneously writing brand new material that sounds different and fresh from what they are playing night after night? However, Harry Styles seems to have come back with a sound that is lightyears away from Fine Line and with a renewed sense of comfort and ease.

What hits you straight away as the tinkling sounds and infectious beat of the first track, “Music For a Sushi Restaurant”, begins is how Styles has moved on stylistically from his last album.  By the time the scat singing, doo wop-esque harmonies and the blaring brass of the joyful horns have you dancing and singing along to fluffy lyrics that reference fried rice, ice cream and coffee on the stove (even the goofy lyric, “I could cook an egg on you”), you realise that Styles is probably having as much fun as you are. This is a welcome change from Fine Line, or even his debut album Harry Styles from 2017, where he seemed overly anxious and eager to pile on reference points, particularly from rock music history, in order to prove he deserved to be taken seriously.

In his interview for Apple TV with Zane Lowe (who absolutely raved over this album, calling it a “triumph”), Styles spoke about how the the lockdowns during the covid 19 pandemic allowed him time to relax, self-reflect and allowed himself to feel more comfortable with himself as a person, a phenomenon of the past two years that I think we all experienced in some shape or form. The results of this can be heard all over an album that seems to take inspiration from disco, soul, jazz, and R&B, not just a rock sound in a bid to increase his credibility. “Late Night Talking” takes influence from sounds of the 80s and the hit single “As It Was” clearly has sprinkles of inspiration from A-ha. Despite this new sound, he returned to work with frequent collaborators Kid Harpoon and Tyler Johnson nearly exclusively but this small writers room doesn’t have a stifling effect on Harry’s House at all.

Often an artist will have a small team of writers if they want to try something a bit more experimental or take more musical risks but Harry’s House has quite low emotional stakes lyrically. “Daydreaming,” may have shallow lyrics but is a genuinely groovy sex fantasy that samples the Brothers Johnson’s 1978 disco classic “Ain’t We Funkin’ Now”.  ‘Cinema’ is similar in this way but again, the rhythm guitar makes the song just funky enough to stand out. The songs are mostly about romance or sex: Styles is pondering a past love, but never too upset about it, or sometimes drawn to someone new, but not absolutely head over heels either. He’s “not worried” about who his ex is going home to on the ballad “Little Freak”; he’s not drunk after multiple bottles of wine and despairing, he just simply has the “grape juice blues” in “Grapejuice”.

Then again, an album doesn’t have to produce groundbreaking lyrics or say something profound to be good. That’s not to say that there are no dark themes on the album: “Daylight” contains a lot of drug references, “Matilda” is a touching guitar ballad advising someone to leave a hostile family situation, and the gorgeous “Boyfriends” is for a friend in a toxic relationship, inspired by bad boyfriends he saw his sister bring home. But, in a similar philosophy to his beauty brand Pleasing, the priority is your listening pleasure and Styles sounds genuinely at ease with writing songs where he will sonically make that happen without any expectations of how he should sound or what he should be talking about. He has described Fine Line before as a record about romance, sex and sadness. Harry’s House is like the other side of the coin to Fine Line - it’s about romance, sex and feeling good about normal life for a change.