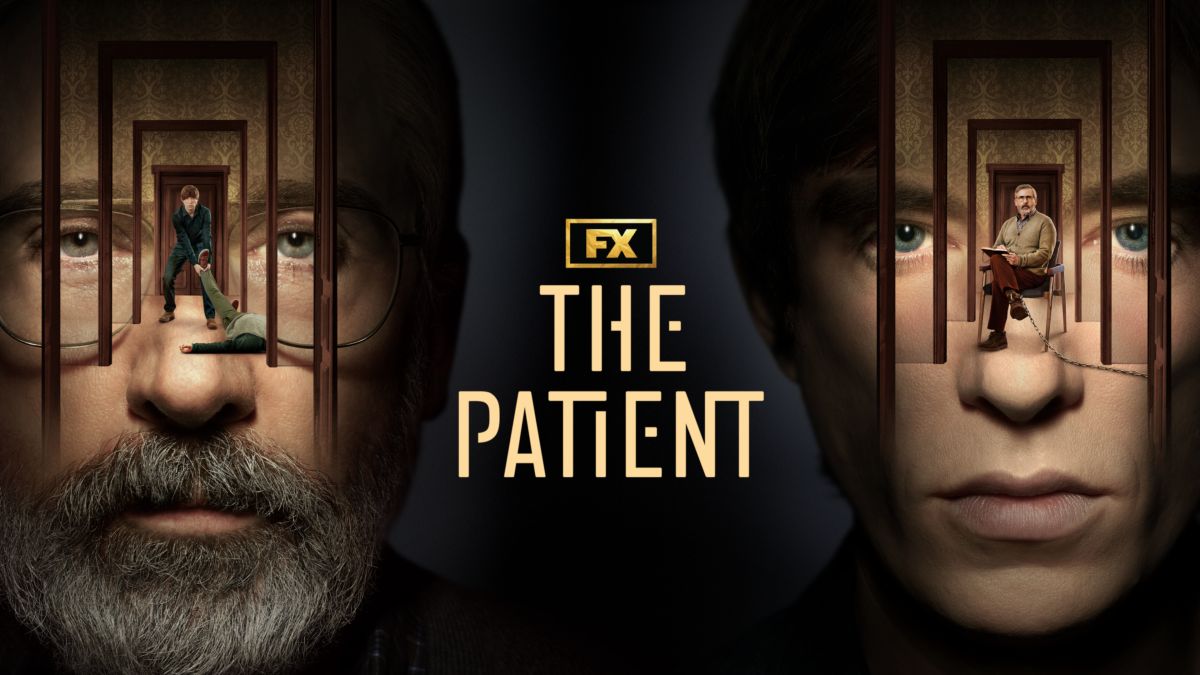 In October, the suspenseful miniseries The Patient by Joel Fields and Joe Weisberg with Steve Carell and Domhnall Gleeson debuted on Disney Plus. The series counts on ten episodes between 25 and 45 minutes, portraying a personal but intensely anxiety-inducing story. The result is very convincing, and in this article, we will be looking at what makes The Patient a series worth watching.

Firstly, let us have an overview of the plot.

The series follows therapist Dr. Alan Strauss (Steve Carell) and Sam (Domhall Gleeson), a serial killer with uncontrollable urges to kill. To try to stop himself from killing people, Sam turns to therapy but does that in the worst way imaginable, is to say, by abducting his therapist and keeping him in his basement chained to the floor. Here, Dr. Strauss is forced to have psychotherapy sessions with Sam, trying to talk him out of committing other murders and encouraging him to set him free.

Apparently, it is critical to get the right actors for the part when filming a series where a sizeable portion of the action takes place in a room with only two actors conversing. Indeed, this is the series’ most significant accomplishment. Carell and Gleeson have been skillfully cast, and their performance is impressive and impactful. Although Carell is often dismissed exclusively as a comedy actor resulting from his success as Michael Scott in The Office, in The Patient, he proves perfectly capable of dramatic and reflexive roles.

On the other hand, Benjamin Lee comments on Carell’s performance in The Guardian: ‘It’s surprisingly perfect territory for Carell, though, whose more serious work hasn’t always convinced, the forced quiet of his character and the way that he talks to others allowing his excesses barely any room to emerge.’

His performance of Dr. Alan Strauss, both vocal and physical, is astonishing and perfectly mirrors the characteristics of the character. For example, his speech is composed, and deliberate, spoken slowly and calmly to Sam, and his gaze is soul-piercing, able to communicate that the therapist is knowledgeable and studying Sam’s every move, and, at the same time, he is terrified by his condition as Sam’s prisoner.

In addition, Lucy Mangan also praises Gleeson’s performance: ‘Gleeson makes Sam genuinely odd and unpredictable, with his coldness shot through with sparks of … something, even if we cannot call it true human feeling or compassion’.

Undeniably, Gleeson is able, through his performance, to portray the ambivalence and contradictions of Sam’s character; he is a killer but also a young man with a troubling childhood marked by violence and a deep desire to improve. Likewise, Gleeson succeeds in portraying this sentiment, going from moments of murderous fury to total calm and even remorse and awareness of the wickedness of his actions.

Moreover, throughout the series, we see Sam truly worried about his violent urges and trusting his therapist and his pieces of advice to the point of having both Dr. Strauss and the audience feel compassion for him. However, these moments of compassion alternate with moments of fear of the unpredictable and dangerous nature of the character.

In this regard, Sam can be understood through the term ‘anti-hero,’ defined by literary critics, Daniel M. Shafer and Arthur A. Raney as a character who is ‘morally ambiguous’ and ‘well-intending but flawed.’ Like other anti-heroes such as Walter White in Breaking Bad, Sam is characterized by a paradoxical and ambiguous nature that confounds the viewer’s perception.

Additionally, the performances of the actors add compelling writing, which does a fantastic job in the characterization of the characters and their interaction during the ‘therapy sessions’ in Sam’s basement. Indeed, these are marked by measured words and growing tension between the unpredictable Sam and the falsely calm therapist who secretly plots his way out of the basement alive.

Relatedly, throughout a series of flashbacks and voiceover narration, Dr. Strauss recounts his backstory and personal struggles and trauma. In this regard, the series touches on exciting themes that have not been discussed mainly on the screen to this day. For example, it is discussed Alan’s troubled relationship with his son Ezra caused by the boy’s religious conversion to orthodox Judaism, and the trauma of the Holocaust relived by the man during his imprisonment.

In conclusion, The Patient is a well-written and amazingly performed series that deserves to get more credit than it already has to this point. If you give it a chance, it will keep you glued to the screen throughout every episode, making you feel fear and anguish for both the prisoner and his jailer.

Strange World: Why Is Disney’s Latest Animated Film A Flop?