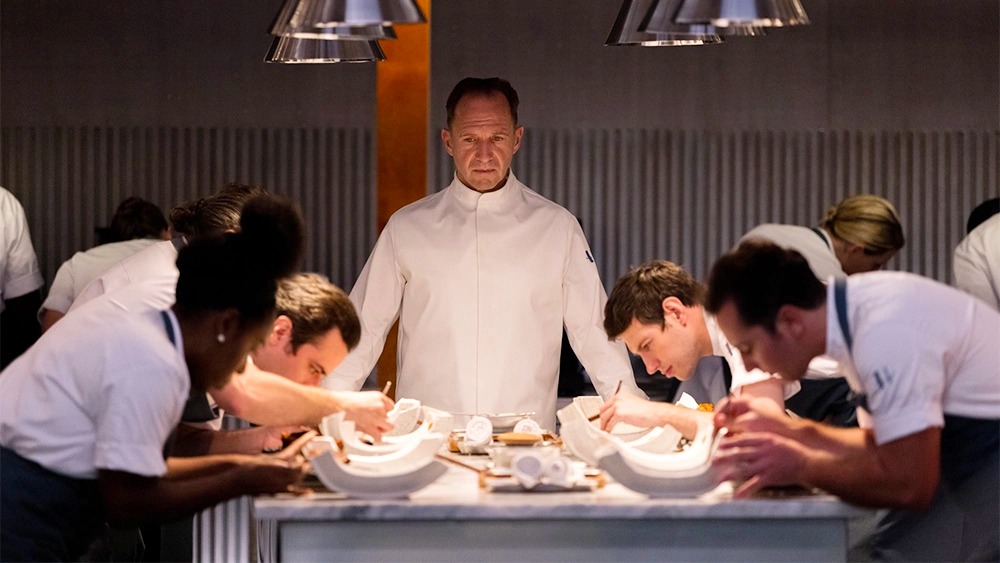 An insightful dark comedy thriller that makes us not only want to eat the rich but simmer them over a sizzling flame.

From Succession and Game of Thrones director Mark Mylod comes a sinister and delicious bite of criticism, in the form of cold-blooded cynic gore, toward a particular kind of elitism; those of old, new, and Hollywood money.  All have something in common, they all believe that, because of the status they possess, they are deserving of much more than they are paying for.  And that is what they will get.

With its world premiere at the Toronto International Film Festival on September 10, 2022, its release in the United States on November 18, and in South America on December 1, The Menu has left viewers with more than a particular craving, maybe one of a need for righteousness, or maybe want a cheeseburger.

Similarly to many recent films, The Menu has taken to point at the extremely wealthy and their sins (which can easily be just being rich enough not to have student loans), to then condemn them through their sense of divine justice. This time, gourmet dining is the weapon of choice.

The film opens with a pompous foodie and apparent old money heir named Tyler (Nicholas Hoult) scolding his unamused and last-minute date, Margot (Anya Taylor-Joy), for smoking a cigarette before dinner, for this will ruin her appetite. This is while they’re waiting for the boat that will take them to Chef Slowik’s private island restaurant, known as Hawthorne, where they will experience such fine cuisine that costs $1,250 a head.  “What, are we are eating a Rolex?” comments an unenthusiastic Margot, a character we immediately discern is lazily thrown in the mix to be the one we all must relate to.

In addition to them, there are nine other guests on board, from obnoxious tech bros Soren, Dave, and Bryce (Arturo Castro, Mark St. Cyr, Rob Yang), haughty food critic Lilliam Bloom (Janet McTeer) and her sycophant editor Ted (Paul Adelstein), an unnamed washed-up movie-star (John Leguizamo) with his lover slash assistant Felicity (Aimee Carrero), to the bored and long time married Richard and Anne (Reed Birney and Judith Light), who’ve already dined there more than once. But this time is not like the others; as the trailer suggests, something sinister is afoot.

Their meal is to be served by Chef Slowik (Ralph Fiennes), a mad culinary genius with a cult-like hold over his staff. A thunderous clap from Slowik himself precedes each course. It is followed by a “Yes, Chef!” from his loyal cooks, a detail that Mylod skillfully utilizes throughout the film to create tension and a sense of dread for the viewers as the narrative unfolds. With a zen-like but unsettling demeanor, Fiennes channels his Red Dragon performance, adding to the sinister tone of the film and also creating a sense of defeat in the viewer. This is how it must be, there is no other way, and the ending we all fear is inevitable.

Furthermore, the dishes, with amusing on-screen descriptions like those of a regular cooking show, provided cynical and almost comedic commentary on the sins of the rich. Such as the “Breadless Bread Plate,” which, in Slowik’s words, represents how far away this highbrow mix of people is from the commoner. At first, this is taken as a compliment, but later we find out it was not intended to be one.

What follows are dishes such as “Memory,” small chicken thighs accompanied by a dreadful tale of domestic violence in Slowik’s childhood, and laser-engraved tortillas that reveal each table’s dark secrets. An intro to what the rest of the night will entail.

Then comes “The Mess,” pressure-cooked beef, bone broth, heirloom carrots, and potatoes. An ode to what Slowik previously describes as “Pressure to please the customers. Pressure to please the critics. And even when all goes right, the food is perfect, the customers are happy, and the critics are too, there is no way to avoid The Mess. The mess you make of your life, of your body, of your health, of your sanity, by giving everything you have to pleasing people you will never know, people whom you increasingly care nothing about.”

As Chef Dominique Crenn describes to Variety, “because the pressure in the kitchen is so high — mentally you can get affected, and then you lose it,” As Mylod’s chief technical consultant for the conceptualization of the menu, she understood just how much it could drive someone over the edge when their art and life’s work isn’t appreciated or respected, as has happened to Slowik.

“I’ve wasted my life. I thought I was an artist, but instead, I see I’ve been slavishly trying to please people who can never be pleased,” Slowik woefully states.

This phrase sums up the darkness of the film. It expresses the reality that, once you subject your art to the claws of elitist pirañas, what will be left of you is a husk of the person you once were, all the joy derived from your creation has turned into sickly madness and a desperate hunger for vengeance.

With each stone-faced ingredient Chef Slowik adds to The Menu, we genuinely see how chefs take their cooking as a medium of expression; as his rage escalates throughout the film, the scenes become much more gorish, with suggestive and clever violence that the viewer can even find, at times, comedic. The theatricality and understated luxury of this mono-space, as well as the presentation of the dishes, serve as a blatant ironic criticism of what becomes the act of enjoying a meal in the stomachs of the highly wealthy; pompous, meaningless, and void of humanity.

The Menu serves as a hearty meal for those who seek a prickly critique towards the rich in the form of a cynic thriller, but also it leaves the sense that it might not be the best restaurant to visit.