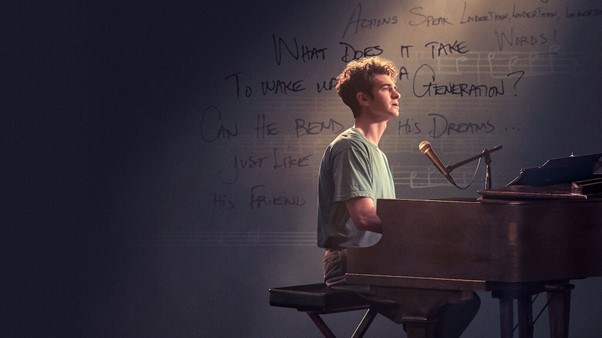 Tick tick...boom! is a Netflix original film that was released at the end of 2021, kicking off the new year with a bang. The film is a tribute to the late and great Jonathan Larson, the creator of the well-known musical Rent, as well as Superbia (the musical which the film’s storyline is based around) and Tick tick...boom!, the film's title.

The plot is driven by a sense of running out of time, which is continually in the film’s foreground, asserted by the ticking clock that resonates throughout the 1 hour and 55 minutes. The fear of the future, the fear of mediocrity, and the fear of running out of time is ingeniously explored through this story of one of the greats, which has proven to resonate deeply with its audience. It seems implausible that the man who created Rent, which is so well-loved and timeless, shared the same fears as so many of us.

This cast redefines the term "star-studded." Instead of overwhelming the cast with numerous A-list celebrities Lin-Manuel Miranda has paid tribute to a slew of musical theatre maestros. Cameos are made by many musical theatre icons, for example the appearance of Lin-Manuel Miranda himself (director of Tick tick...boom! and creator of Hamilton) and Vanessa Hudgens from High School Musical. Every scene in this film is packed with details, references, and connections to the biz that we call show, in particular Larson's own life. As a result of this Jon's presence is felt on screen, from the crammed and sagging bookcase to an original painting that hung in his flat and, of course, the green dress about which he would later write a song about. Details like these illustrate how determined this film is to honour Larson's legacy, and how sincere Miranda is in his unflagging efforts to pay tribute this musical theatre icon, in all creating a beautifully fleshed out viewing experience; there is so much unpack.

The film is, of course, a musical, featuring songs written by Larson and reimagined by Andrew Garfield who excels at capturing the eccentric musical theatre writer's talent, and larger-than-life personality which positively leaps off the screen.

Even with the many musical numbers and the tendency to breaking into song, the tone of this movie is beautifully raw and wonderfully real. There is something fragile about how tenderly Larson's life is portrayed- his relationship troubles, the struggles he has with his friends, and his all-consuming fear of running out of time. Not to mention the film's cinematic excellence: from the views of Manhattan to the critical underwater sequence, and the ricocheting between the unfolding storyline and the narration offered through Garfield’s recreation of Larson’s one-man show. This film is a carefully crafted masterpiece.

I must admit that I am not musical theatre fanatic, and my knowledge of Larson was limited prior to this viewing experience. However, after seeing this film, I have a strong sense of how well-loved Jonathan Larson is for his influential work, and I am left with a desperate need to consume all of his musicals. I can only imagine the joy (and pain) which this brought to so many musical theatre fans. I'd be remiss if I didn't note how much I adore the film's ending, in all its simplicity, realism, and melancholic tones; a greeting from an authentic picture of life, put simply and as Larson said himself (or rather sang), "this is the life bo-bo bo bo bo".