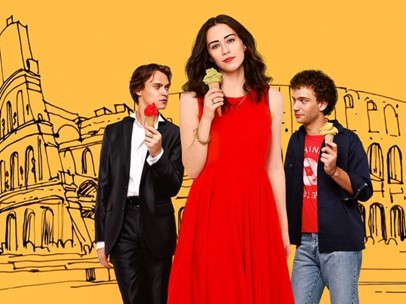 Love and Gelato is the 2022 romantic comedy Netflix adaptation of the popular book of the same title (Love & Gelato by Jenna Evans Welch). Disclaimer: I have not read the book (or trilogy), and after watching the movie I can firmly say I will never read the book.

The story follows protagonist Lina, a grieving teenager, who is fulfilling her mother’s dying wish of going to Italy, which is the last thing Lina feels like doing. Feeling obligated to keep this promise to her departed mother Lina packs her suitcase with all of the American mannerism that Europeans find infuriating, enough MIT sweatshirts so that the audience know she is smart (if the glasses weren’t already a giveaway), and heads off to Europe alone, confused and, well, grumpy. Nothing a little gelato can’t fix (which is essentially a summary of the whole movie).

Lina finds herself in the vivacious, pulsating city of Rome, and smack bang in the middle of a love triangle; albeit a very bland, very dry love triangle, despite the fact food and Italian cuisine is a central theme.

Lina is left to answer the age-old question- Ice guy? Nice guy? Or no guy? (different movie, but the premise fits).

This movie ticks off clichés like they are items on a shopping list. Lina undergoes ‘dramatic’ character growth while in Rome, or she just gets a haircut and stops wearing her glasses. The rich Italian guy who is kind of a jerk falls in love with her at first sight, which is a strange expectation to reinforce in the young, impressionable girls lapping up every detail in this movie. But Lina feels torn as she develops a friendship with a super sweet Chef who keeps feeding her Italian delicacies. These clichés and tropes are so overused they feel old and tired, like having jetlag.

These characters feel like book characters come to life. They are two dimensional and lacking substance. Their dialogue feels scripted and flat. The plot holds some interest as Lina navigates difficult family relations, the secret past of a mother she thought she was close to, first love, first heartbreak and finding a sense of identity after spending her teenage years handling her mother’s illness. Italy is a beautiful setting for a discovery of self, known for its rich culture, passion and really good food.

There is something tender and touching in the way Lina “walks in her mother’s footsteps”. This expedition is more than grappling with identity, it is a way that Lina can feel connected to her mother even after she is gone. Supposedly the book explores more of these wholesome, sentimental moments which fail to make it into the movie.