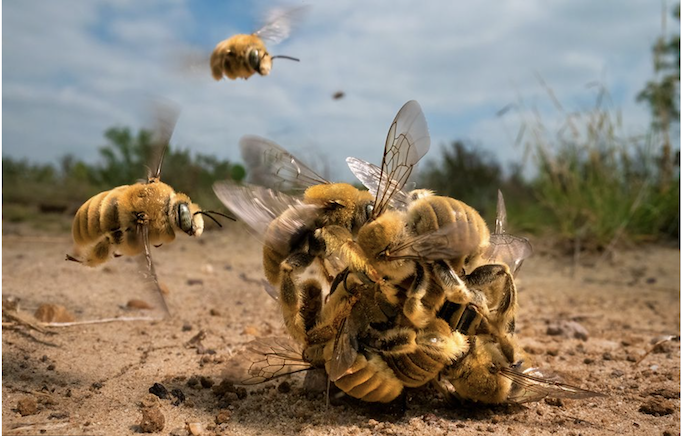 Only the winner of the scrum will get to take her to the little ant hill-type mound of earth he has made for her to nest in, a little like a volcano.

These bees make their own network of burrows like small rabbits and can, in the blossoming season for cactus flowers, be as big as several tennis courts wide, with several mounds everywhere around cacti growing nearby as their source of food. 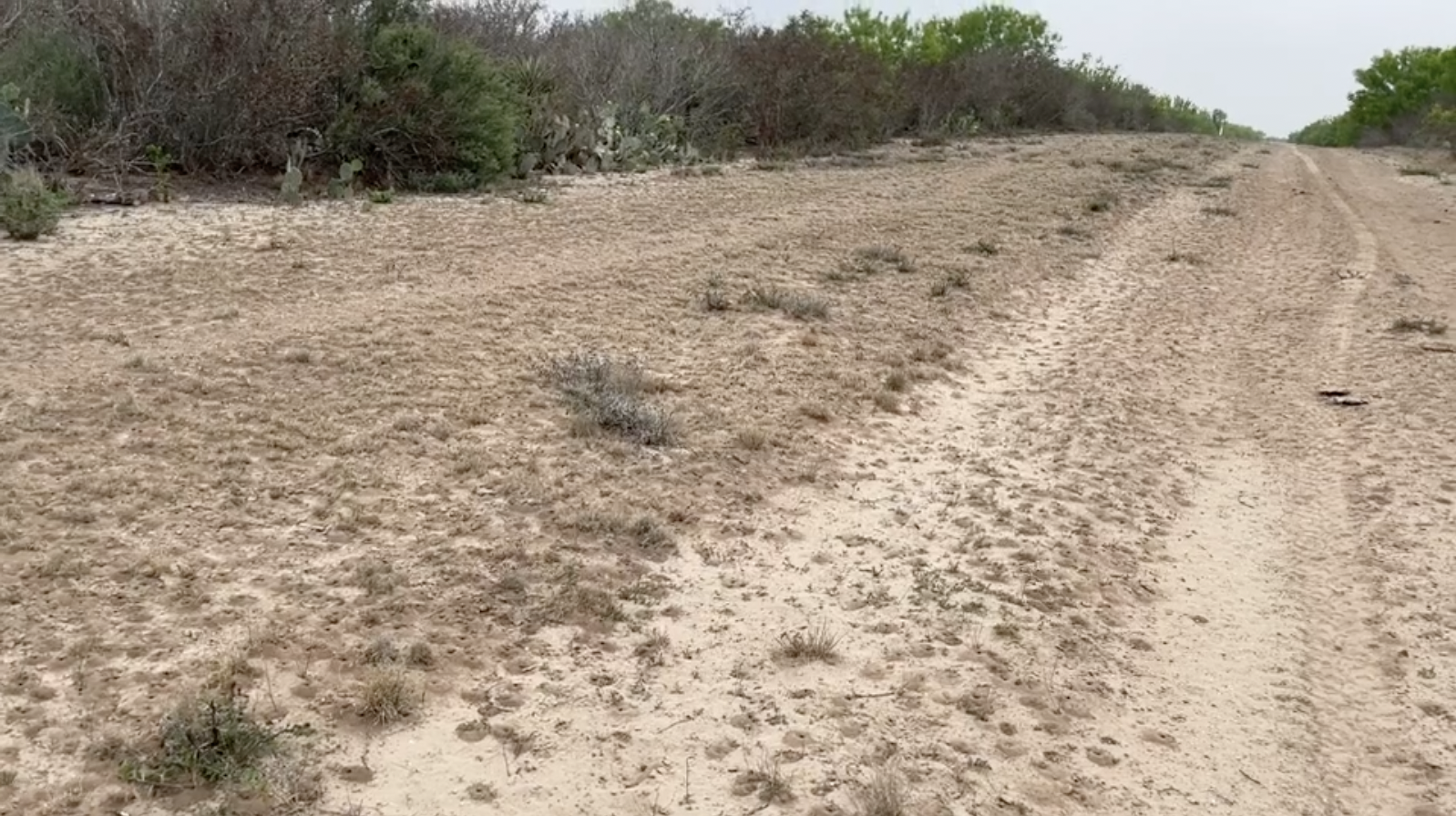 (Walking among the Cactus Bee nests, a still taken from the short clip by Karine sent to BBC)

Found in Northern America and Mexico, these species of bee look like the typical honeybee, except that they, as the name heavily suggests, harvest from Cactus flowers and eat from the spiked plant, including the prickly pear plant.

As they don’t live very long lives and the female balls up pollen for storage in the burrows as food for the Larvae.

These bees also mature early, so they need to find a mate as soon as possible, leading to the rugby-like scrums in the photo above for a suitable mate.

To get the shot, Karine told BBC she used a macro probe lens to get the shot. According to her, ‘I had to spend quite a bit of time on my belly in the dirt’ to get the shot itself, which almost took the entire time she was in South Texas for the photo opportunity, which took several weeks of shooting to get the perfect opportunity.

‘It wasn't something I went looking for. I've been working on a ranch in South Texas for years, and I just happened upon the location. I saw all these little 'volcanoes' in the ground - the individual burrows dug by the females to make their nests.’

Roz Kidman Cox, who chairs the judges for the competition, commented on the photograph's composition.

‘The picture is fabulous; it's got so much energy. It's a proper 'behaviour' shot. That's what you get from invertebrates, and that's why I love them; it's also the composition. What makes the photo complete are the bees coming in from the side. They give you 'the soundtrack'.

The competition was started in 1964 by BBC Wildlife Magazine, though the competition is now organised by London's Natural History Museum instead.

This year's event drew thirty-eight thousand and fifty-eight entries from over ninety  countries in total.

Following the rules, anyone can enter, providing they are seventeen for the young photographer category or eighteen and above for the adult competition.

The photography must be photographs the entrant has taken themselves and has agreed that these will be part of up to three exhibitions.

These chosen photographs will be put up for the Photojournalist Story Award, the Rising Star Award or the Portfolio Award.

Photographs must not be of domesticated pets, farm animals or cultivated plants and not breach any terms of ethics in order to have taken. (ie. Photographs cannot be staged purposefully.)

In detail, this means entries must not deceive the viewer or attempt to disguise and/or misrepresent the reality of nature.

The caption information supplied must be complete, true and accurate; and

images must not portray captive, restrained, manipulated animals, animal models, taxidermy animals, and/or any other animal being exploited for profit.

The only exception is when reporting on a specific issue regarding the treatment of animals by a third party, in which case you must make clear that the animal was captive, restrained, a model or a taxidermy animal.

(i.e. An animal in captivity for conservation purposes.)

You must not do anything to injure or distress an animal or damage its habitat in an attempt to secure an image. This includes flying (or flying a drone) too low or noisily over an animal – an animal’s welfare must come first.

You are responsible for ensuring full compliance with any applicable national or international legislation (including in relation to drones) and for securing any relevant permits (which, in the case of human portraits, will consist of the subject’s permission) and which must be made available to us if we request it.

Live baiting is not permitted, and neither is any means of baiting that may put an animal in danger or adversely affect its behaviour, either directly or through irresponsible habituation. Any other means of attraction, including birdseed or scent, must be declared in the caption for the Jury and us to review.

If we suspect that an entry has been achieved through cruel or unethical practices, including the use of live or irresponsible bait or in any way in breach of these Rules, the entry will be disqualified, and the Natural History Museum judges of the competition, reserve the right to report you to the applicable authorities for your country.

The annual exhibition dedicated to the WPY competition opens at the Natural History Museum in London on October fourteenth 2022. As in past years, it will also go on tour around the UK and to ten countries worldwide. Entries for the fifty-ninth Wildlife Photographer of the Year have been accepted from the tenth.

Countries in the past that have been toured internationally include venues in Australia, Belgium, Canada, Denmark, Germany, the USA and more.

Despite this, American photographer, Karine Aigner is one of the very few women to get the first-place spot, in the adult competition half, with her being the fifth woman to win the top prize in the fifty-eight years of wildlife photography history of Wildlife Photographer of the year.

Karine was born in Saudi Arabia and later found her passion for photography, exploring the relationships between humans and animals. Her work started as a senior photo editor for National Geographic Kids magazine, a job she relished for nine years.

She is a member of the International League of Conservation Photographers (iLCP) and a member of Girls Who Click.

Now though, she lives in Washington, D.C., and she and her blue heeler rescue dog, Kaliska, love exploring the woods together.

The Decline of the Vultures: Diclofenac, poaching and how they can be saved from extinction