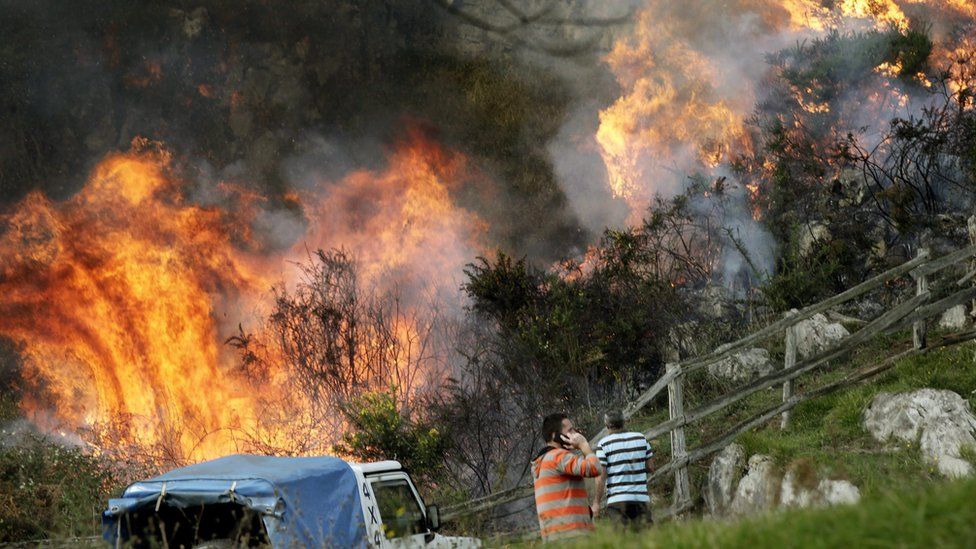 Over the past few weeks, Spain has been battling wildfires in different parts of its region. As a result, the fires destroyed thousands of fields, and hundreds of residents involuntary evacuated their homes.

Wildfires were reported in Spain after the early heat wave broke some records. Temperatures in Madrid reached 40 degrees. According to the Washington Post, The State Meteorological Agency declared this the earliest heat wave in more than 40 years.

The continued high temperatures in Spain were the cause of the wildfires in 17 different regions.

According to a World Meteorological Organization spokeswoman, climate change caused these heatwaves and are "a foretaste of the future."

More than 600 firefighters have been battling wildfires, attempting to save as many animals as possible. Due to safety concerns, residents of 15 municipalities in the Navarra region evacuated.

The Sierra de la Culebra, located in the northwest mountain range of Castilla and Leon, was one of the most affected areas. The fire affected 30,000 hectares, forcing people to evacuate throughout the 18 municipalities.

Firefighters from all over Spain arrived to assist in putting out the fires by using helicopters and planes. Finally, some fires were declared "under control" last Sunday.

The Sierra de la Culebra community is concerned about the wolves in their neighborhood. The area where the wildfire broke out was known for having one of Spain's largest wolf populations.

Following reports of soil erosion caused by high winds and rain in the area, people raised concerns. Soil erosion could impact the sustainability of the wolves' activities in the area. There is also concern about the newborn wolves, as female wolves typically give birth in mid-May.

Recently, fires were reported on the Baldomar peninsula in Catalonia. According to the authorities, 500 hectares got destroyed, and another 20,000 were at high risk of fire. Although residents have not been evacuated, measurements are being taken. Firefighters put out more than 30 fires.

Additionally, 2,000 people were evacuated in Andalucia, a region in southern Spain, due to the possibility of wildfires caused by the hot weather. The expected high temperatures heightened the fears.

Prime Minister Pedro Sanchez expressed his thoughts on the wildfires on Twitter, expressing sympathy and solidarity with the residents of the area. He wrote, "A difficult night in Sierra Bermeja."

These heatwaves were felt all over Europe. Temperatures in Germany and France reached 40 degrees. Weather warnings issued across Britain had temperatures reaching 32 degrees in London. The hottest months of the year are typically mid-July and mid-August, so this heatwave is unusually early in the season.

Spain is anticipating a warm summer with a chance of additional heatwaves. Aemet recently stated that "by the mid-twentieth century, which is not far away, a normal summer could be as hot as the hottest summer we have experienced so far, if not hotter, so what is extraordinary now will just become normal."

A Look Into Europe’s Migrant Crisis