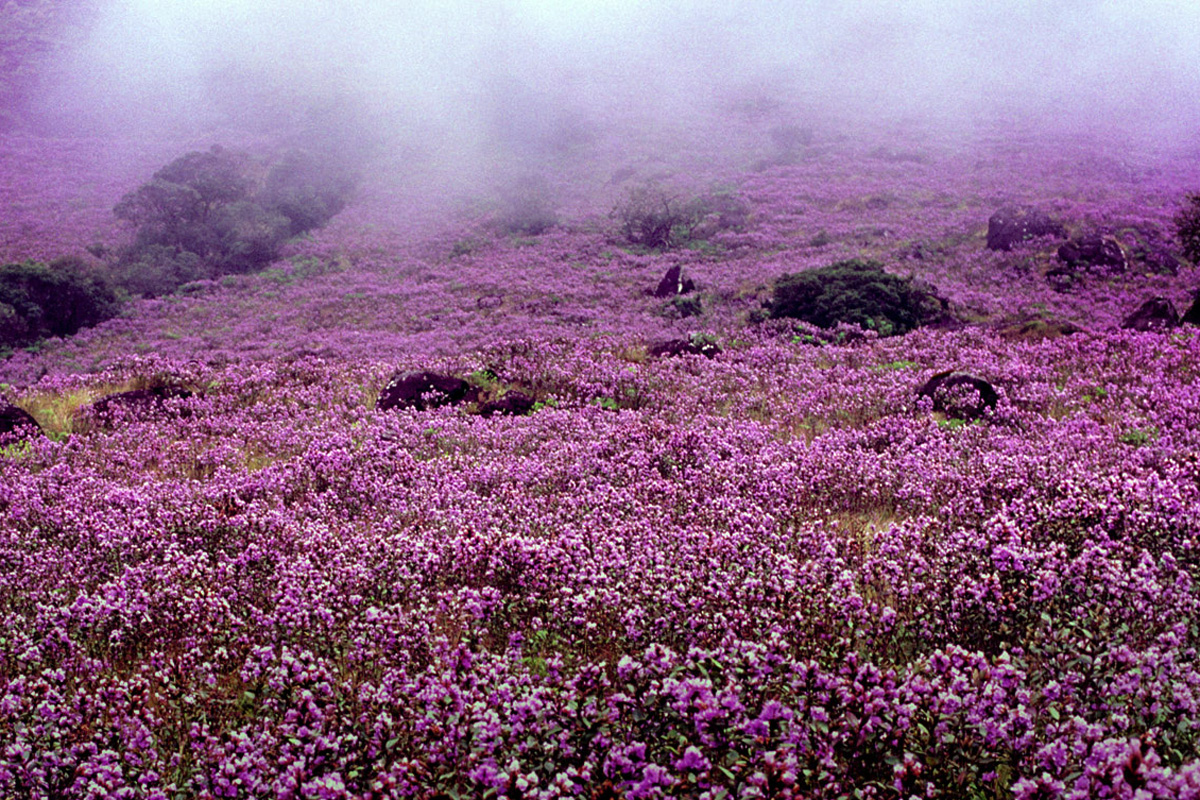 Neelakurinji is a shrub that blossoms into a bluish-violet shade flower. The sight of this flower blooming over areas in and around the Western Ghats is magnificent and it happens only once in 12 years. When it does blossom, it flowers over particularly isolated areas. It is also an endemic species whose presence is confined to very few places in India. The foothills along the western ghats, especially hilly areas bordering Kerala and Tamil Nadu are where the sightings of this flower are widely seen. This includes places like Annamalai, Shalom hills, Ankara Mettu hills, Meesapulimala, Kolukumalai to name a few. Since the shrub blooms only once in twelve years, isolated flowerings happen at different regions in the western ghats at various points of time. But once the flowering happens, you would only be able to witness it in the area after a span of 12 years.

The Anamalai hills blooming in 2018, at the Eravikulam National Park premises is said to be one of the largest and most wonderful sites, where the Neelakurinji was witnessed recently.

However, the most recent Neelakurinji sighting came from the Shalom Hills. This was reported on August 3rd, 2021 and the location is close to the Shola National Park, which is situated on the border of Kerala and Tamil Nadu.

Nilgiris or Nilgiris hills in the Western Ghats are said to have derived their name from the Neelakurinji flower. Since the flower has a bluish-violet shade, 'Neela' refers to blue which is what influenced Nilgiris. It also blossoms over a large area in a single isolated flowering, thereby making it a visual treat.

According to Roy Mathew, former Deputy Editor of Hindu, and environmental journalist the blooming of Neelakurinji, helped certain tribes like the Paliyan, to calculate their age. The Muthuvan tribe also considered the flower to be a symbol of love and romance as well.

The Neelakurinji, as a shrub is scientifically termed to be a part of the Strobilanthes genus. Studies show that there are approximately 350 species of Strobilanthes spread out across South Asia. Although the shrub is also found in parts of North India, especially the Himalayas, 65 species are exclusively found in South India and Srilanka.

According to the work done by Arvind Bijawal, associate professor at the Uttarakhand University of Forestry and Horticulture, the shrubs can be found at an elevation of 1300m-2400m. He also writes that the isolated flowerings of the shrub happening in Uttarakhand did not attract tourists on a large scale. On the other hand, the blooming of Neelakurinji has been a vantage point to attract large-scale tourism projects and increase revenue in Kerala and Tamil Nadu. However, since the shrub is endemic and largely confined to specific areas in South Asia, the endangered aspect of it is a matter of concern. Increasing tourism to isolated sightings of the flower can be detrimental to its further conservation as well.

Kerala prominently advocated the western ghats in its tourism proposals from the 1990s. This included eco-tourism projects which involved gaining access to the most inaccessible parts of the hills to view the Neelakurinji flower. According to an article from the Economic and Political Weekly named ‘Munnar: Through the Lens of Political Ecology’, ecotourism happened with the help of local tribes who were familiar with the forested areas in the hills. In subsequent bloomings from 1994, people started becoming more aware of the wonder called Neelakurinji. This brought in a lot of local tourists from Kerala and Tamil Nadu so that they could witness the blue beautiful heavenly hills that they never knew existed.

The rampant access to the foothills to see the flowering made the tourism industry boom. Parts of the Western ghats like Munnar became major tourism locales. Nonetheless, at the same time, the areas where Neelakurinji grew started becoming spaces where ecological damage multiplied due to human negligence. Tourism projects in the form of resorts, and other facilities induced a large-scale land grabbing fiasco, which caused deforestation, forest fires, and other forms of damage to the environment. A forest fire in 2018 at the Neelakurinji sanctuary in Vattavada went on for 7 days causing damage to at least 1000 hectares of environmentally protected land. This included land where Neelakurinji shrubs were found immensely.

At the time, the responsibility for the fire and damage was blamed on the land mafia. The development of tourism that happened under the government, private individuals without any conservative concerns can also be deemed an appropriate root cause to these instances.

COVID restrictions and protocols have made access difficult to regions where Neelakurinji grows. The spectacle that attracts much attention is inevitably rare and endangered. As a result, the areas where the flowering of Neelakurinji is predominant must come under proper conservative regulations and protective policy measures.

The Statue Of Unity: Pride Of India