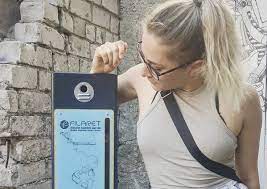 Tallinn, the capital city of Estonia, is gradually but steadily turning into the mecca of technology. National Geographic recognized this phenomenon and defined it as “the global leader in digital innovation that unites people”. The city is a pioneer in digital services, with almost everything available and feasible online, like voting and signing transactions. Moreover, Estonia was the first country in the world to declare access to the Internet a basic human right, providing its citizens with one of the fastest 5G connections in the entire world.

In late August, the Tallinn-based recycling company, Filaret, launched a two-month ambitious pilot project. The company specializes in collecting and upcycling cigarette butts and turning them into 3D printing filaments. The final product is promised to be sustainable, compostable, and environmentally friendly.

On August 25, the company accomplished positioning its first cigarette butt recycling bin along the beaches of Tallinn. Following this feat, Tallin plans to position 20 additional cigarette butt recycling. In doing so, it hopes to contribute to the decrease in marine litter. According to Waste Management World (WMW), cigarette butts are one of the most widespread marine litter types in the Baltic Sea. Cigarette butts contain toxic and non-biodegradable components in their filters, which constitute a threat to the marine environment. As WMW points out, the toxic substances contained in one single cigarette butt can persist for up to 10 years and can contaminate up to 1,000 liters of water.

The ambitious project was carried out in cooperation with the Circular Economy Department of the Tallinn Strategic Management Office. Following this, the location of the bins was decided together with the Põhja-Tallinn district government. The first places chosen were the Stroomi beach park, the Katariina quay, and the fishermen’s slip at Pikakari beach. It is believed that the bins will collect a considerable number of cigarette butts, and there are talks of a café with an outdoor terrace that will soon be opened. Another positive outcome of the project is that the cigarette butts will be not just collected but also upcycled into recyclable 3D printing material. This is an excellent example of a circular economy model.

Tallinn Deputy Mayor, Joosep Vimm, praised the project and expressed his hope for future success. He acknowledges that at least 80 tonnes of cigarettes are discarded into the marine environment each year, inevitably affecting not only the marine ecosystems but also human health. The toxic substances, which cannot be decomposed into the sea, are passed on to humans through their fish consumption.

This project is just one of the several initiatives undertaken by Tallinn to align with the new environmental imperatives. As the environment section of the EU Commission reports, the “Tallinn 2035” is a tangible example of Estonia’s strong commitment to helping the environment. The plan tackles issues like circular economy, carbon neutrality, sustainable energy, and food production. Moreover, the country pledged to contribute to social issues like street remodeling and stormwater management system development. Not coincidentally, the city was awarded the well-deserved title of European Green Capital 2023.

In the near future, it will be interesting to monitor the first results of the newly positioned cigarette butt bins. Notwithstanding the company’s noble commitment, people’s participation will be the determining factor for the achievement of this green goal. Until then, well-done Tallinn!

Estonia: Between Geopolitics and Memory Politics