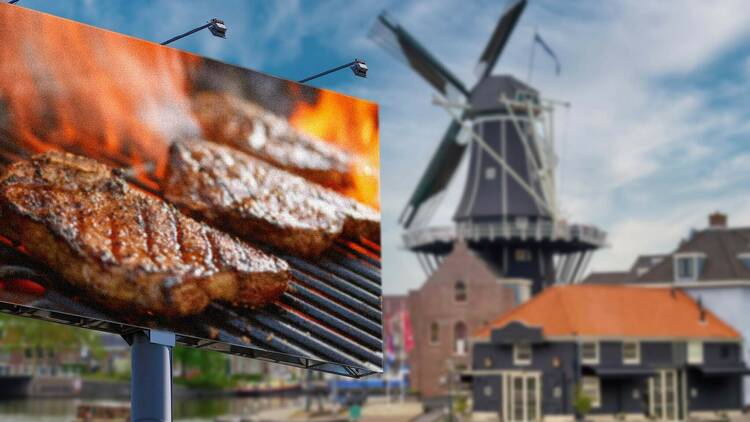 “A Dutch city will become the first in the world to ban meat adverts from public spaces to reduce consumption and greenhouse gas emissions,” declares a report. The city is Haarlem, situated west of Amsterdam, with 160,000 inhabitants.

Climate change is taken seriously in the Netherlands. Indeed, Harlem’s resolution follows Amsterdam and The Hague’s bans on adverts for the aviation and fossil fuel industries. The ban on most meat ads from public spaces (Haarlem’s buses, shelters, and screens in public spaces) will be effective from 2024. The motion was drafted by the green political party GroenLinks and supported by the Christian Democratic Challenge party.

In contrast, the proposal found opposition from the entire meat sector. Many said that the ban restricts free speech. “The authorities are going too far in telling people what’s best for them,” affirmed a Central Organization for the Meat Sector representative. Some even called it an “unacceptable violation of entrepreneurial freedom,” saying this “almost dictatorial” move “would be fatal for pig farmers.”

One of the councilors from the GroenLinks party, Ziggy Klazes, answered the complaints by maintaining that the ban does not restrict people’s freedom in what they eat. It suffices to say that around 95% of people in the Netherlands eat meat (but more than half do not eat it daily). It would be hard to try to change the food choices of almost the whole population.

However, Klazes think, “We can’t tell people there’s a climate crisis and encourage them to buy products that are part of the cause.” “Of course – she goes on – there are a lot of people who find the decision outrageous and patronizing, but there are also many people who think it’s fine.” However you put it, Harlem’s decision shows incredible consistency and sensibility on the climate change issue. It is a signal of change and an example that the entire world should follow to arouse public opinion on food choices.

This is most urgent since UN Climate Change reports that livestock rearing generates 14 percent of all carbon emissions (that is the amount generated by all transport). Moreover, farmed animals occupy nearly 30 percent of the ice-free land on Earth. Further, the livestock sector generates a seventh of global greenhouse gas emissions and consumes roughly one-third of all freshwater on Earth. To give but one example, beef produces the most greenhouse gas emissions (also methane).

To sum up, the situation is becoming more and more unsustainable. Among the most effective solutions, FAO suggests to the consumers who want to help:

- to consume meat and dairy products from animals reared only on grasslands;

On this issue, ecologist Hans-Otto Pörtner believes, “It would indeed be beneficial, for both climate and human health, if people in many rich countries consumed less meat, and if politics would create appropriate incentives to that effect.”