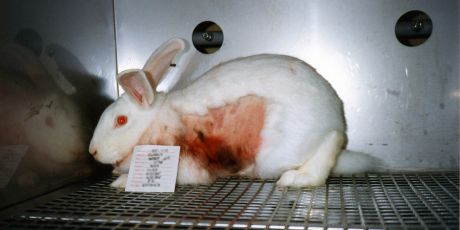 Animal testing began in the 20th century after a woman used a previously untested mascara and was left blind. This event caused the U.S. Food and Drug Administration (FDA) to pass the Federal Food and Cosmetic Drug Act in 1938. Different pharmaceutical and cosmetic laboratories began testing products on animals. When this proved helpful, they expanded the use of animals as test and experimental subjects.

In the last 20 years, more than 10,500,000 animals died after being subjected to various clinical tests and experiments to further the human pharmaceutical and cosmetic world.

During these procedures, the animals in question (mainly mice or rabbits) are exposed to torture methods such as deprivation of water, food, or sleep, induction of heart attacks, or other lethal diseases such as cancer, infections, body mutilations, and brain or further sensory organ damage. According to Prof. Dr. Juan Enrique Romero, veterinarian and specialist in Psychoimmunoneuroendocrinology, between 41 and 100 million animals end up in the hands of laboratories every year.

A short film called "Save Ralph," published by the Humane Society of the United States launched a campaign with the same name against animal experiments that went viral internationally. The short film shows an animated rabbit recounting his experience after being exposed to clinical investigations. He talks about his blindness and industrial burns that cause pain all over his body and tells how all his relatives before and after him were test animals and died doing their job. The short film then shows the tests he is subjected to: they put chemicals in his eyes, burn him and break his bones while other animals in the background scream and beg to be taken away.

From this short film, Nicole Valdebenito, Communications Director of the NGO Te Protejo, based in Argentina and Chile, created a petition to start boycotting brands that still use animal testing and to start using exclusively "Cruelty-Free" brands. Many NGOs oriented to the protection of animal rights (established in Law 14346: MALTREATMENT AND ACTS OF CRUELTY TO ANIMALS) emerged, such as ADDA, ONG Te Protejo, Animanaturalis, etc. On March 11, 2018, a march was organized against animal testing.

By talking to a biologist specialist at an international biopharmaceutical service provider (who chose to keep her identity anonymous), I found new information that helped me understand the things that happen during these experiments: "the purpose of animal experiments is to be able to understand how certain drugs react within a functional organism" she said, "before any investigation that needs the use of an animal, a laboratory has to consult CICUAL (The Institutional Commission for the Care and Use of Laboratory Animals) and give them an estimate and justification of the level of severity that would be implemented on the animal to ensure the most ethical and humane use of these animals possible. "

In search of a technical veterinary perspective, Alejandro Hitters and Guillermo Bianchi, who currently work at Veterinaria Florida in Buenos Aires on Avenida Las Heras, revealed that at the University of Buenos Aires, in the pharmacology course, the animal is given the virus or disease to see how to cure it, a task that is left to the novice students. They also commented that rats, rabbits, and guinea pigs are the most used for this type of experiment because they reproduce faster than other animals and can be easily manipulated. This way, biologists ensure they have enough animals for the number of experiments they want to do.

They also offered their expertise on specific operations performed on different types of animals. "Non-invasive abdominal endoscopic operations were not approved at first on humans, so it had to experiment on pigs first because their digestive system is very similar to that of humans," said Hitters, owner of the veterinarian's office. "Monkeys have been experimented on, but it is forbidden to intervene on them because they are higher on the zoological scale. This scale measures the level of evolution or according to the level of humanization they have. The higher the level of consciousness, responsiveness, or tact they have, the higher they are on the scale and cannot be intervened," adds Bianchi.

Even though they are veterinarians and dedicate their lives and careers to caring for and curing animals, veterinarians admit that animal experiments are processes they respect for humanity's sake. They maintain that they are procedures that must be carried out to ensure that the human race can progress in medicine and that there is still much to learn about the human body's reactions to various types of drugs.

Infobae mentioned in an article published in April of last year: "The campaign, promoted by the NGO Humane Society International, aims to put at the center of the debate the need to raise awareness about the cruelty of animal testing and to discourage the consumption of products that use these practices for their production."

Their goal is to eradicate the practice of testing on live, defenseless animals and replace it with alternatives that do not involve torturing any animal species.  A consensus among members representing the pharmaceutical industry is that the medical environment has yet to be explored. Clinical analysis in animals is still crucial to understanding how organisms function concerning different drugs and formulations. The opposite can be said about the cosmetic industry, which has enough alternative methods and previous bibliography to prevent any undesired reaction in humans.

The Little Boy From Rosario