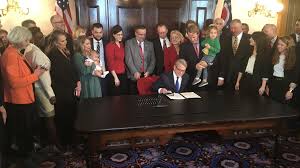 A post-Dobbs v. the Jackson United States has seen its fair share of concerns. Many state legislatures are drafting new legislation in the wake of its effect. However, many states already have bans in place due to pre-drafted trigger laws implemented in the circumstances like this with the overturning of long-standing judicial precedent.

One case coming out of the state of Ohio has caught national attention based on the details surrounding the case. A 10-year-old rape victim was denied an abortion in Ohio because she was too far along in her pregnancy. In Ohio, the trigger ban was instituted after the Dobbs v. Jackson decision, which banned abortion if the pregnancy was six weeks in, with no exceptions for rape or incest. The 10-year-old girl who was denied access to an abortion was six weeks and three days pregnant.

The 10-year-old was able to get an abortion in the next state over Indiana. However, Indiana's legislature is likely to ban abortion within a matter of weeks when the special session of the state assembly convenes next month. Dr. Caitlin Bernard, an obstetrician-gynecologist who provides abortions, is receiving a massive increase in requests for abortion. Regarding the push for an abortion ban, Caitlin Bernard said, “It’s hard to imagine that in just a few short weeks, we will have no ability to provide that care.”

Anti-abortion political figures have been pressed to comment on the matter. Republican Governor Kristi Noem of South Dakota commented on the matter instead of choosing to discuss the actions of the abuser rather than the issue regarding victims' access to an abortion.

Ohio Governor Mike Dewine called the rape and subsequent denial of abortion of the 10-year-old girl a tragedy but said nothing of the underlying that prohibited her from receiving the procedure, a law signed by the governor himself back in 2019. Mike said this in response to the abuse, "This is a horrible, horrible tragedy for a 10-year-old to be assaulted, for a 10-year-old to be raped. As a father and as a grandfather, it's just gut-wrenching to even think about it."

Ohio's House minority Allison Russo who opposed the 2019 law, said this in response to the denial of procedure for the victim, "Please tell me how forcing a 10yo sexual abuse victim to carry her pregnancy to term and endure childbirth is anything other than barbaric?"