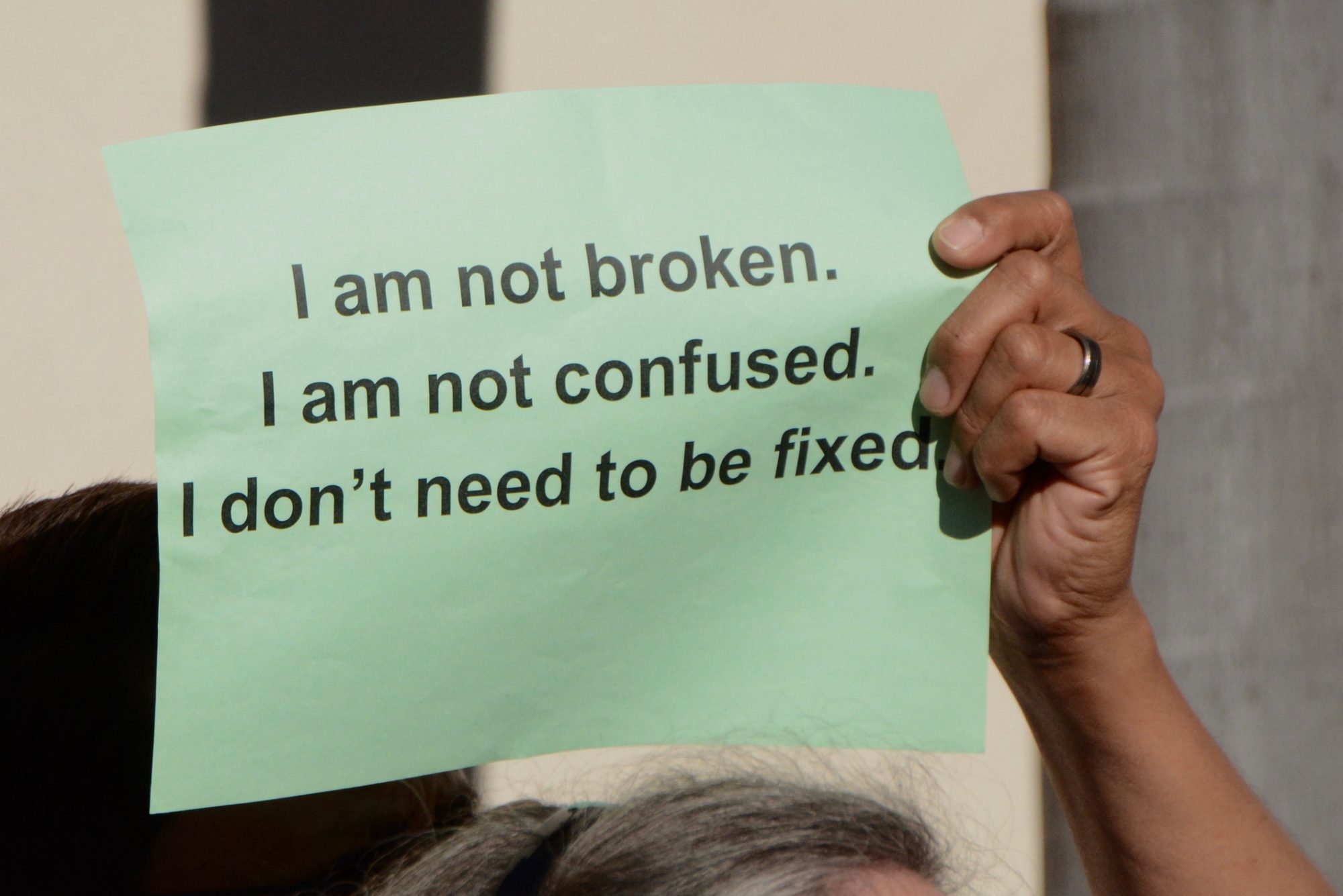 Conversion therapy is built on the premise that lesbian, gay, bisexual, and transgender people can be transformed by removing feelings of same-sex attraction or alternate gender identity. The therapy aims to ‘’cure’’ and transform a person’s sexual orientation or gender identity into one that corresponds to constructed socially approved civil status.

The struggle to move past such dated and unrealistic standards is clear through this form of ‘’therapy’’ which justifies the unjustified use of unregulated cruel practices. Even though the psychological and physical effects caused by conversion therapy are groundless, it is still practised in 68 countries around the world.

It can be argued that the combination of the words ‘’conversion’’ and ‘’therapy’’ is fundamentally problematic and misleading due to the lack of scientific research and medical certification.

The so-called therapy can be argued to be supported by those who do not experience the barbaric practice but rather live in the lie of it being a solution.

Information by a United Nations Independent expert explains that perpetrators of the practice are found in faith-based organizations, state agents, and public and private mental healthcare providers. The practice is usually approved and promoted by family and community members.

This article asks, who does conversion therapy really benefit? As evidence based on years of torture of people highlights the horrific results of depression, self-harm, and anxiety, does conversion therapy simply exist as a fallacious solution for those who struggle to move away from the purposefully constructed gender binary and heterosexuality?

Banning conversion therapy in the UK

For the first time, this year, the UK government was meant to host the first #SafeToBeMe conference for global equality. The event had the aim to urge governments around the world to improve their responses to inequality and discrimination. The event has been supported by many national LGBTQ+ foundations- support that was built on the promise of the government to work towards the safety of and equality for the community.

A ministerial forward released in December 2021 presented conversion therapy as a crime that the government is committed to banning, stating that “we want every individual to have the freedom to be themselves and proposals have been developed with the protection of LGBT people in mind. The proposals we are bringing forward in this consultation are intended to ensure that everyone in this country is protected through both criminal and civil measures’’.

Only 4 months before the #SafeToBeMe conference, Prime Minister Boris Johnson announces the ban of conversion therapy for lesbian, gay and bisexual people but not transgender people. As a result, the UK government breaks their promise to the people, betraying those who trusted their government to protect them from the cruelty of the practice.

What has been described as a clear message of governmental condoning of abuse and torture of the transgender community contrasts previous statements of Boris Johnson in which he described the method as ‘’abhorrent’’. Moreover, allowing the practice goes against the message that the government is trying to pass through the #SafeToBeMe conference for equality and safety for everyone.

The UK has since cancelled the conference due to the massive controversy caused, resulting in many of the charities involved, as well as the first LGBT+ Business Champion and Equality Adviser to quit.

The prime minister has responded to the criticisms of his government’s decision, arguing that Gillick competence - meaning children under the age of 16 being able to consent to their own medical treatment without parental permission - should not be applied in the case of kids making decisions about their gender.

Nevertheless, the government's decision can not be justified as children are still likely to suffer the consequences of the harmful practice. A recent global survey unveiled that 4 out of 5 people subjected to conversion therapy are 24 years old or younger whilst half of those were under 18.

The incomplete ban highlights the lack of real commitment of the government to LGBT+ causes. It seems that there is an incapacity in this decision to produce legislation that provides supportive and safe options to those requesting it without undergoing emotional and psychological abuse.

The argument that transgender people should face the use of unscientific and religiously motivated abuse over being trans is a decision to not allow children to decide without their parent's approval, showing the government’s inability of producing mindful legislation.

Existing issues faced by the trans community such as attempted suicide and suicide rates, physical abuse of adults and minors because of their gender identity and expression, sexual assaults, verbal harassment, evictions and homelessness remain untackled today while the government condones further harm upon the community.

An existing memorandum of understanding on conversion therapy was signed in December 2021 by 20 health, counselling and psychotherapy organisations in the UK including NHS England and NHS Scotland⁶. The memorandum states that all signatories are opposing the practice of conversion therapy, describing it as unethical, potentially harmful and lacking supporting evidence.

People in the UK and around the world have gone online to express their disappointment and anger caused by this decision, explaining that a ‘’conversion therapy ban’’ that excludes trans people is not a ban. What was once the government’s person to tackle discrimination and inequality, the #UnSafeToBeMe decision aims to separate people based on their gender identity.

The support for the ban is extremely weak and even though it attempts to divide people by protecting only some people, the LGBT+ community and people outside the community are coming together to fight for the complete ban of the practice and the protection of trans community.

Organized protests, encouragement to contact members of parliament, raising awareness through accurate sharing of information and donating to charities are some of the ways people can voice their support for the complete ban of conversion therapy.