Formation of Pakistan and the Apple of Discord Kashmir Part 2 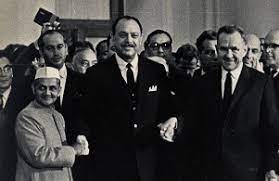 Now Pakistan had tasted fame over Kashmir, the newly formed nation was behaving like a clingy little ex-model who would do anything for the limelight. The world was feeling sympathy for the damsel in distress on the surface but was weaving its diplomatic network underneath. Pakistan felt it was the centre of the fuss but could not fathom the interest it would later pay on this bargain and the futility of fighting when it would harm their frail economy. No wonder their current cricketer PM is always begging for funds to run the country and Kashmir acts like the point of the horizon where they concentrate all their efforts.

In 1954 Pakistan joined the Western group and concluded a military treaty with America as a result it began to receive military assistance from it whereas India remained non-aligned. After this Pakistan also entered SEATO, in the changing scenario India opposed this treaty. Although the American government assured that in giving military assistance to Pakistan there was no intention of creating problems for India (as if) but the prime minister of Pakistan declared its intention to use this assistance against India in settling the Kashmir issue. Hence India vehemently condemned and criticised the military assistance of America to Pakistan. America's chief aim behind the support of Pakistan was to make use of Pakistan against Russia as a base. The US wanted to establish an aerodrome at Gilgit in Pakistan situated on the Frontier of Russia Russia. When the Soviets came to know of the situation she began to support India on the issue of Kashmir. In 1956 Russian leaders like Khrushchev assured India that "In case you just call us from the top of the mountain, we will immediately rush to your help." Russia proved to be a good ally for India until the Indo China War when it decided to support "Communist Brothers" and not "Indian Friends". That's how the issue of Kashmir was dragged into the Cold War. Meanwhile, the Constituent Assembly declared Kashmir an integral part of India and decided to implement the constitution framed on the 26th of January 1957. Pandit Nehru and Pakistani foreign minister Feroz Khan accused each other's country of not arriving at a final decision regarding the settlement of the Kashmir problem. So after being on a break for four years Kashmir was again placed before the Security Council.

Zarring in the big picture

On the request of Pakistan, America, Britain, Australia and Cuba jointly proposed that Gunnar Zarring of Sweden, the president of the security council should go to India and Pakistan and give and give his report about the Kashmir problem by 15th April 1957. Pakistan lodged the following complaints against India before the security Council -

India is oppressing the Muslims and forcing them to flee Kashmir.

A meeting of the Security Council was summoned on the 24th of September 1957 to consider these complaints of Pakistan against India. It was prolonged and ultimately on the 2nd of December 1957, Frank Graham was appointed to settle this issue.

Utopia and a stolen hair relic


Pakistan accepted these proposals but they were rejected by India because -

Meanwhile, Pakistan gave some of the occupied areas of Kashmir to its oriental mistress, China. India opposed this saying that Pakistan has no right to perform such an action but to no avail. On 28 December 1963, the hair relic of Prophet Muhammad was stolen from the Hazrat Bal Mosque of Srinagar. Capitalising on this incident, Pakistan began to vomit communal venom against India. Hence disturbance broke out in Eastern Pakistan in which thousands of Hindus were killed and many refugees migrated to West Bengal.

Pakistan invaded Kutch after this and more than 3000 armed infiltrators of Pakistan violated the ceasefire line and entered into Kashmiri territory in a very planned way. Their chief aim was to plunder the Indian territory and to create terror thereby establishing their control over the Radio station, airport, Secretariat and other significant places. This was the time when the real mentality of the sick country was revealed. Pakistan expected full support of Kashmiri Muslims in this adventure but the result was contrary to their expectations. Kashmiris instead of helping the infiltrators supported the Indian government in capturing and handing them over to the authorities. After this fiasco, the infiltrators of Pakistan made an invasion over India on 1 September, 1965. India made a counter-attack and paid Pakistan in the same coin. The war came to an end as a result of a resolution passed in the security council on 23rd September 1965 in which the forces of both countries were compelled to retreat to their position as on 5th September 1965. Although a cease-fire was declared and tension continued between the two countries, Russia proposed talks at Tashkent between India and Pakistan to establish lasting peace. The following points were arrived on -


Russian Prime Minister Kosygin acted as the mediator and although the treaty was tilted towards Pakistan, India thought it would create final peace and so went with it despite getting the shorter end of the stick. The territories of Hajipur, Tithwal and Kargil were given to Pakistan which was a part of India (little did we know that beggars never stop asking for more). After that Lal Bahadur Shastri was sorely criticised and died mysteriously in Tashkent just after the treaty conclusion. Lal Bahadur Shastri's final message was

"We all are to fight for peace with the same determination as it fought against the aggressor."

Despite all the sacrifices of India by way of accepting the spurious demands of Pakistan, the other country did not leave the path of hatred for India. Perhaps that is the last leaf of hope that keeps the citizens of Afghanistan going but the result is a massive loss for both countries. If so much time, thought and energy would have been used for better causes, the situation would have been far different.