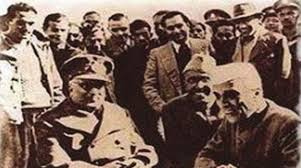 With the partition of India on 14th August 1947, Pakistan came into existence. It was expected that peace and harmony would be maintained between the two countries but unfortunately, the attitude of Pakistan always remained hostile and the relations between the two remained uncordial since the days of its inception. Once Jawaharlal Nehru while discussing the relations between India and Pakistan said in the parliament:

"People, especially foreigners are wrong in thinking that Kashmir dispute is the cause of trouble between the two countries……. our basic thinkings are different. We believe in secularism but Pakistan believes in Islamism and the Two-Nation theory. The majority of Muslims in Kashmir are an eyesore to Pakistan according to this theory. Hostility towards India is part and parcel of Pakistan's religio-political ethics."

The piece of land which stole peace?

There were many intricate problems other than Kashmir like Hyderabad, the question of payment of the debt, the issue of refugees and the canal water dispute. The problems were not tough to solve but there was no cooperation on part of Pakistan sending spies to India even before their country was a week old. The constant exhibition of this psychology was done under the name of the Kashmir dispute. With the establishment of India's Independence, the subcontinent was divided into two parts - India and Pakistan. There were several independent states in India before independence and they concluded separate treaties with the British government. By these, the British government authorised them to establish their union with either of the two according to their own sweet will. Kashmir was a state with a majority of Muslims but it was ruled by Hindu King, hence the king of Kashmir decided to remain independent and he did not join hands with either of the two countries. But Pakistan always had a one-track religious plan and did not like the attitude of Kashmir. Pakistan's leaders wanted to incorporate it into their country, hence in the beginning they put some economic pressure on Kashmir by stopping the supply of various commodities. Since this would be a slow method, they instigated the Kaibalis of the Northwest frontier.

Pakistan's inaugurating step as a nation

On 22nd October 1947, the Kaibalis invaded Baramulla, situated 15 miles away from Srinagar the capital of Kashmir. In such a grave situation there was no other alternative before the king of Kashmir except to join hands with India and to take military help. King Hari Singh of Kashmir and Sheikh Abdullah, the chief minister and leader of the National Conference of Jammu and Kashmir joined India and requested immediate help. India incorporated Kashmir into it and sent her army for the safety of Kashmir. The issue of Kashmir was to be decided by a plebiscite after the end of hostilities. The government of India asked the government of Pakistan to remove the Kaibali invaders from Kashmir but the Government of Pakistan did not pay any attention and continued its underhand support to the Kaibalis. Hence the Indian Army had to check their advancement and force them to retreat. After this, the Government of India launched a complaint against Pakistan on the 1st of January 1948 in the Security Council that the Kaibalis had attacked a part of Indian territory with the help of Pakistan. India tried to prove that -

Pakistan not only disagreed with the acquisition of India but also in turn accused India of mal intentions and declared the annexation of Kashmir by India illegitimate. The security council appointed a Joint Nations Commission consisting of five nations, Czechoslovakia, Argentina, the United States, Colombia and Belgium to make an on-the-spot enquiry and settle the dispute of Kashmir.

Thus after prolonged discussion, the ceasefire was declared on the 1st of January 1948. The final decision of incorporation of Kashmir was to be taken after seeking public opinion on this issue. Admiral Chester Nimitz, an American National, was appointed administrator to fulfil the condition of the plebiscite but no decision could be arrived at and ultimately he had to design this post.

MacNaughton and Dickson skiing in paradise

General McNaughton, the Canadian President of the Security Council put forth a proposal on the 29th of December 1949 for the solution of the Kashmir problem. According to this both India and Pakistan were advised to remove their armies and demilitarise Kashmir so that plebiscite could be arranged. In this plan, both the aggressor and the victim were put on the same plane. BN Rao, the Indian representative declared in the United Nations Organisation :

"Today the position is that Pakistan which throughout 1948 denied giving any aid either to the invader or the Azad Kashmir forces, is now itself not only an invader but in actual occupation of nearly half the area of the state without any local authority from any source. This is naked aggression of which no one can approve but there is no sign of disapproval in the McNaughton proposal." After the obvious failure of the McNaughton proposal, the Security Council proposed on 24th February 1952 that both the countries would remove their forces within five months from Kashmir and this Herculean task was to be done under the supervision of Oven Dickson, an Australian judge. He started his work in 1950 and opined that the captured portion should remain with the victors and the decision of Kashmir should be done by plebiscite. But this scheme was not acceptable to either of the countries as both considered it contrary to their interests. The following were the fundamental shortcomings of the scheme -

Soon Dickson, having realised that it would not be possible for him to solve this problem, tendered his resignation and proposed that this issue should be settled through talks. This was followed by more decisive efforts internationally. To know how this story unfolded check out the second part about Graham's report and the famous Tashkent Pact of 1996.

Formation of Pakistan and the Apple of Discord Kashmir Part 2