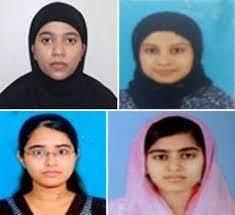 Four women from Kerala who were married to members of the Islamic state requested to return to their homeland India. The question that still lingers in minds of the citizens is whether they should be allowed to return as erstwhile citizens of India or not.

The head of the National Directorate of Security in Kabul, Ahmad Zia Saraj informed the reporters that 408 members of the Islamic State from 13 countries across the world are currently detained in Afghanistan in several prisons. This sum of 408 members includes 4 Indians, 299 Pakistanis, 16 Chinese, and two each from Maldives and Bangladesh.

The Indians amongst these members were four women from Kerala who moved to Nangarhar in Afghanistan around 2016. These four women were married to ISIS members who died in attacks carried out by the terror organisation. These women were among thousands of Islamic State members who surrendered to the Afghan authorities at the end of 2019.

The NIA reported on the respective backgrounds of these four women. Sonia Sebastian, an engineer from Kasargod in Kerala departed from India on May 31, 2016, along with her husband, Abdul Rashid Abdulla from Mumbai airport. The agency also reported that “the couple held secret classes in support of IS and jihad, as propagated by it, during last part of Ramadan, sometimes in the month of July, 2015 in Padanna and Kasaragod.” (Source: The Hindu)

Merrin Jacob alias Mariyam was the wife of Bestin Vincent, a resident of Palakkad. Both of them left Kerala and went to Afghanistan in 2016 to live in the territory controlled by the Islamic State. The couple was converts to Islam after their marriage and Vincent changed his identity to Yahya. Vincent was later killed in Afghanistan. Vincent’s brother Bexon and his wife, Nimisha who assumed the identity of Fathima, after conversion to Islam, also left for Afghanistan with them.

The fourth woman, Reffeala was the wife of Ijas Kallukettiya Purayil, who was a physician from Kasargod. He was presumed to be one of the IS terrorists who stormed a prison in Jalalabad, Eastern Afghanistan in August 2020. An attack that claimed the lives of 30 people.

In March 2020, a video of the interrogation of the four women was published by Stratnewsglobal.com, a website for strategic affairs news. The four women who appeared in the video were identified as Sonia Sebastian alias Ayisha, Raffeala, Merrin Jacob alias Mariyam and Nimisha alias Fathima Isa. There were further reports from senior officials of the surrender of two other women and a man from India.

These women seek asylum for themselves as well as their children. However, there is no concrete decision by various government agencies involving the return of these four women and their children. They were interviewed by Indian intelligence agencies along with their children one month following their surrender.

“One line of thought was to allow them to come back and become an approver in the cases here. However, their interview revealed that they are highly radicalised. The France model may be followed and the Afghanistan authorities can be requested to put them on trial there,” reported an official. (Source: The Hindu)

Red notices have been issued by Interpol at India’s behest. In India on the other hand, the National Investigation Agency (NIA) had filed a charge sheet in 2017 itself after the departure of 21 men and women from Kerala, including Sebastian in 2016 in batches to join the ISKP in Afghanistan. They crossed over to Afghanistan on foot from Iran.

If asylum is rejected for these four Keralites, India will not be the first country to do so for women married to Islamic State terrorists. Britain and France have both taken a strong stand to prevent such women from coming home. A precedent was set by Britain when 21-year-old Shammia Begum hashas was denied asylum. She has been the most prominent figure involved in such a legal battle. In 2019, her citizenship was cancelled by then-home secretary Sajid Javid.

France has followed a similar precedent, towards women who have married ISIS terrorists situated in refugee camps in Syria.

Since May last year, there have been claims of the establishment of a new ‘province’ in India by the terror outfit.  This, first of its kind announcement that came after clashes between militants and security forces in Kashmir.

Through its Amaq News Agency, the organisation has reported that the Arabic name of this new branch is "Wilayah of Hind". Source: Economic Times

The Indian agencies have been closely monitoring these developments since the surrenders have taken place. The reaction of the government agencies has been intentionally slow as they must proceed with utmost caution on the issue of ISIS returnees.

The question that has solidified in the minds of masses is whether these individuals should be granted entry back to their respective homelands on humanitarian grounds, if the children of these men and women from the Islamic State deserve quality and non-radicalized education for their better future, if minds of women married to radicals from the Islamic State can be un-radicalized after giving them asylum and lastly, whether all these provisions will come at the cost of national security and safety of citizens residing in the country these women fled from and want to return to.