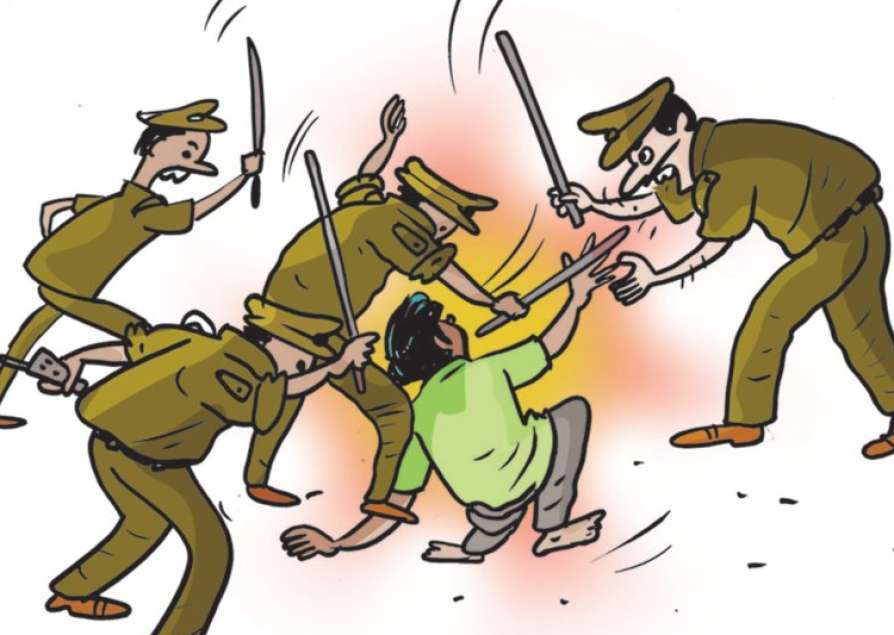 There is a saying, "When the protector becomes the destroyer, life becomes worthless". Again, India witnessed a perversion done by policemen. A victim named Murugesan, died on Wednesday at 5 am at a government hospital, after being indiscriminately beaten by a policeman in public, at the Papanayagam Patti Salem vehicle check-post, near Tamilnadu. The incident happened on Tuesday evening. It has been reported that the victim got involved in an argument with the cops, which triggered the assault.

The entire brutal attack was filmed by someone present there, and later it went viral on social media, Wednesday. The victim's friends continuously pleaded with the police to let him go, but Sub Inspector Periya Sami, stopped the lathi charge only when Murugesan fell unconscious on the road. The other two police officers, namely Divakaran and Balaji stood still at that moment.

It has been reported that Murugesan, a resident of Edapatti near Yethapur in Salem, was a farmer and also ran a shop in Thumbal Road. He along with his two friends went to a liquor store in another district, and while returning from there, they were drunken and had an altercation with the police. Murugesan's wife and other family members demanded action against all of the policemen present there at the time, of the incident.

According to the victim's wife, he left home at 3 pm, and the incident took place around 5 pm. After that, his friends took him to the nearby health care centre from where he was later admitted, to a government hospital at Attur. But seeing the deterioration of his condition, doctors referred him to Salem government Medical College where he died on Wednesday morning. News sources say that the victim has two daughters and a son.

Many people, basically the victim's friends and relatives, gheraoed the police station where he was beaten and succumbed to death, requesting immediate action against the policemen. Police personnel was also appointed, to avoid unnecessary incidents.

Superintendent of Police of Salem district M Sree Abhinav said that a criminal case was registered, against the police officer Periya Sami and he was suspended and arrested. The administration is still in doubt over which IPC sections should the policemen, be punished. Honorable CM promised to give ten lakhs as compensation for the loss to the family of the victim. Necessary actions will be taken, against the cop, he added.

1 year, 2 months ago by [email protected]

The title has such a catchy hook, with a start about protector. You have raised a question, a much-needed one. Protection and protector? Wonderful article.