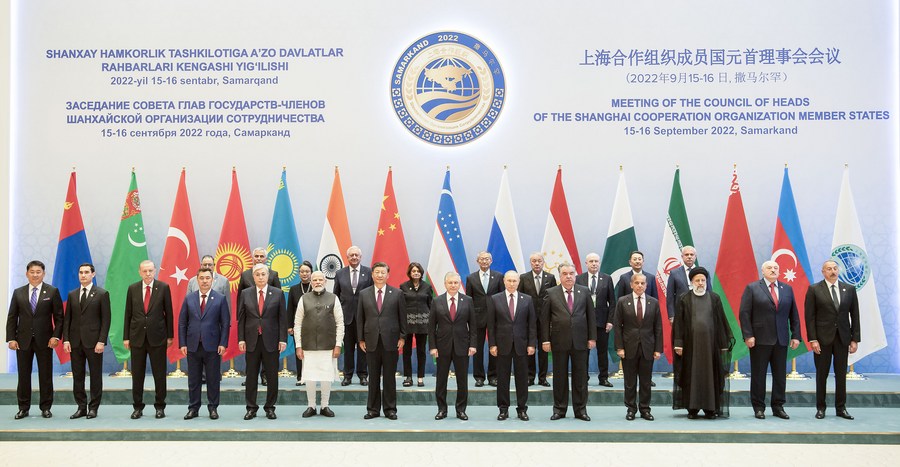 The SCO, an international intergovernmental organization, was established in 2001 in Shanghai as the evolution of the Shanghai Five, founded in 1996. Besides the original members, namely the People's Republic of China, Kazakhstan, Kyrgyzstan, Russia, and Tajikistan, there were new additions. One of these was Uzbekistan, which adhered in 2001, and India and Pakistan welcomed in 2017. Afghanistan, Belarus, and Mongolia enjoy the status of observers.

It was the 22nd meeting since the SCO’s establishment. The location, Samarkand, is a highly symbolic city for the organization as it was the epicenter of the ancient Silk Road and is currently one of the main hubs of the modern one, the Chinese One Belt One Road initiative.

As summed up in Shri Vinay Kwatra’s speech, the Indian foreign secretary, the meeting aimed to address several issues. Among these are current regional and global concerns, the SCO's reform and further economic expansion, the security situation in the region, bolstering connectivity, and the promotion of trade and tourism.

These points were discussed in the Samarkan Declaration, one of the main achievements of the meeting. The starting point is the acknowledgment that the current world is characterized by uncertainty and continuous global change. One of these main changes is the new multipolar character of the international arena, interconnectedness, and strong digitalization. All these factors have a flip side to the coin: threats, local conflicts, and crises that need to be addressed.

Among the most significant points underlined by the Samarkand Declaration are the SCO principle of non-interference with other states’ internal affairs and organizations and the promotion of mutual interests in approaching local and international problems. Principles like the non-use of threats, force, and mutual benefit were stressed. The SCO members reiterated their commitment to a more just and democratic multipolar world based on respect for international law, with the UN keeping its coordinative role.

To this end, connectivity is one of the keywords. Connecting Central Asia to Asia is one of the SCO members' joint goals to ensure prosperity and security through a stronger dialogue among civilizations. The stress is on sustainability, as well, and more precisely, sustainable trade, transport, and communications.

Furthermore, security is another concern for SCO members. The organization has already put forth an ambitious program to combat terrorism, separatism, extremism, and any expression thereof through the 2022-2024 Programme of Cooperation of the SCO Member States. Moreover, the Declaration stresses the results achieved through the anti-terrorism exercises "Pabbi-Anti-Terror-2021" and the joint border operation "Solidarity-2019-2021".

Another fundamental point was the members' commitment to the Joint Comprehensive Plan of Action on the Iranian nuclear program. In this regard, the Declaration confirms the importance of UN Security Council Resolution 2231, calling on all participants to strictly abide by it. It should be noted that the SCO initiated the procedures to admit Iran into the organization last year and that this year the members would discuss the memorandum of understanding regarding Iran’s accession.

Other essential points treated by the Declaration were the condemnation of the militarization of the ICT sphere, illicit trafficking of narcotics, and future joint operations, and a ban on all kinds of weapons, like chemical and biological ones, as well as weapons used in outer space. Another topic addressed was the situation in Afghanistan. The SCO supports the country’s struggle to become a democratic state. The Declaration stressed, among others, the excellent assistance provided by Afghanistan’s neighbors to the refugees.

Economy-wise, the Declaration referred openly to the World Trade Organization’s principles. One of the SCO’s main goals is to support an open global economy and oppose protectionist policies and trade restrictions that go against WTO standards. Moreover, the Declaration emphasized that the implementation of unilateral economic penalties different from those established by the UNSC is against the rules of international law and harms third nations and global trade. Consequently, the SCO requires more effective measures from the WTO.

Besides the Declaration, other resolutions were signed. One of these was the plan for the implementation of the SCO Treaty on Long-Term Good Neighborliness, Friendship, and Cooperation for 2023–2027.

The Russian and Chinese leaders avoided discussing the ongoing conflict in Ukraine. Both Putin and Xi reiterated the friendship between the two countries, with the former praising China for its constant support, trust, and friendship with Russia in a world characterized by uncertainty. On his part, Xi said that the two countries have been cooperating closely to maintain the basic principles of international relations. Nevertheless, as reported by Tass, Putin admitted last Thursday during the meeting that China may have concerns and questions regarding the conflict in Ukraine. While praising China’s balanced position, the Russian leader said that the country’s position on the issue would be fully explained. Moreover, during his speech, the Russian leader  referred to and accused those who are trying to create a unipolar world. A clear reference to the Western world, given that he condemned the recent US provocations in Taiwan and showed his unlimited support to China.

On the other hand, the Indian Prime Minister, Narendra Modi, referred directly to the conflict in Ukraine, saying that “the era of war has ended”. While many Western media outlets interpreted this statement as a public shaming of President Putin, the reality lies somewhere else. The Indian Prime Minister was expressing his concerns over the prolonged state of war in Ukraine and the ensuing economic and political problems. His concerns are also justified by the fact that it will be India's turn to host the next SCO summit. Narendra Modi also met with Turkish President Recep Tayyip Erdogan. The meeting pointed to a gradual reopening of friendly relations between the two countries after Erdogan’s negative comments over the illegally occupied regions of Jammu and Kashmir occurred in 2019. After shaking hands during the SCO meeting, the two leaders agreed to deepen bilateral cooperation. Turkey has already shown signs of opening toward India after the outbreak of the war in Ukraine and the ensuing grain crisis. Accordingly, Ankara agreed to buy more wheat and rice from New Delhi.

All in all, the SCO meeting attempted to promote a unified and harmonized picture of its members. This was even more imperative given the ongoing Ukrainian situation, the harsh Western response, and the situation of uncertainty. This call for unity, democracy, and peace can aim for different goals. Firstly, the abovementioned principles could help strengthen further the cooperation in the vast area covered by the organization, although the word democracy may sound to many like a paradox given that some of the countries involved are far from being fully established democracies. Secondly, it may also be a kind of mediatic maneuver aptly employed by some SCO members to launch a strong j’accuse vis-à-vis the West.

Not coincidentally, the Samarkand Declaration stressed the WTO’s principle of fair trade as well as the impossibility of accepting unilaterally imposed sanctions. This seems to emphasize the Western failure to create a balanced world and that the baton must now be handed over to the East. Whatever the interpretation, the most important takeaway from the last SCO meeting is the enhanced role of China as the main balance keeper. It has already been argued in the past that the SCO is mainly a Chinese initiative through which Beijing is attempting to acquire a major role in the wider area through a multisectoral approach. The OBOR, the well-known Chinese soft power endeavor, as well as the numerous Chinese-led initiatives proposed within the framework of the SCO, especially in the post-Soviet area, are clear proof of this.