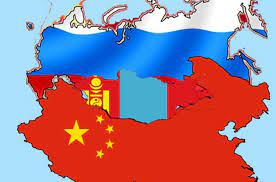 Mongolia, sandwiched between Russia and China, is not blessed by geography.

The current economic situation produced by the ongoing war in Ukraine and the current Western sanctions imposed on Russia is pushing the latter to shift its focus on its eastern channels. Currently, the EU and the Kremlin are, once again, at odds regarding the price of Russian gas. While the President of the European Commission, Ursula von der Leyen, insists on capping Russian gas prices as revenues are used to fuel Moscow's war machine, Vladimir Putin maintains that the economic disruption in Europe is the result of their sanctions.

As reported by Al Jazeera, the Russian President was firm in his view and declared, during the Eastern Economic Forum held in Vladivostok on September 5-8, that if any EU decision contradicts Russian interests, Moscow will stop supplying anything. Not coincidentally, North Stream 1, one of the significant pipelines supplying Europe with Russian gas via Germany, was closed last Friday and will not reopen until the EU lifts the sanctions. The primary justification from the Russian side is that problems arose during the maintenance work carried out in July. According to the Russian operator, Gazprom, these problems concern a gas leak and the already known issue of the missing turbine shipped from Russia to Canada for reparation and back to Germany.

Shutting down North Stream 1 seems to raise no concerns for Russia. On the contrary, the country is promoting new projects and partnerships eastwards. For example, it was the main goal of the Eastern Economic Forum, namely, to strengthen Russian ties with countries of the ASEAN and the Asia-Pacific region. The Forum saw the participation of more than 900 speakers and moderators, more than 400 heads of companies, and more than 4,000 delegates and media representatives. This event has been held every year since 2015.

Among the crucial deals signed during the four-day event was constructing a major pipeline through Mongolia to deliver Russian gas supplies to China, the Power of Siberia 2.

Vladimir Putin's meeting with the Mongolian Prime Minister, Luvsannamsrai Oyun-Erdene, yielded the desired results. The outcome was doubly beneficial for the Kremlin. Firstly, the Russian President confirmed that the agreement dealt successfully with several issues regarding oil and petroleum products, based on the report of the chief executive of Rosneft Company. Secondly, the meeting was the occasion to discuss the details of the ambitious construction of the 2,600 km pipeline, Power of Siberia 2, which is bound to start in 2024 and transport Russian gas from the Western Siberian fields to the Xinjiang Uygur Autonomous Region in northwestern China.

The project, if successfully implemented, will give Russia an economic upper hand in Asia, which is becoming even more imperative for the country given the uncertain situation in Europe due to the rampaging sanctions. China, in this regard, represents one of the major players. Just before the invasion of Ukraine, the Kremlin struck a profitable deal with Beijing for a gas supply extension. The value amounted to $37.6 billion. In a move defined historical, Russian gas started to be pumped to China through the already working 3,000-mile Power of Siberia 1 pipeline.

Moreover, Russia managed to sign a more recent deal with China concerning the payment of gas supplies. Accordingly, both parties will now accept payments in rubles and yuan. As Gazprom CEO Alexei Miller stated, "The new payment mechanism is a mutually beneficial, timely, reliable and practical solution." The main result will be the gradual abandonment of the US dollar, which, according to the CEO, will set a good precedent and example for other companies.

On his side, the Mongolian Prime Minister stated clearly that the ongoing situation in Ukraine will not represent a hurdle for the project to be initiated and that the feasibility study for the project has been completed. Moreover, he declared that his country was not pressured by the Russian giant Gazprom to reach the above mentioned agreement. This deal again shows the pragmatism of Mongolia's foreign policy despite the longstanding problems with China. These concerns mainly the Mongolian minority inhabiting the northern Chinese region of Inner Mongolia, subjected to harsh discrimination policies. Recent events, like Beijing's 2020 decision to abolish the Mongolian language from the area, caused several protests from the Mongolian minority but sparked a much milder reaction from the Mongolian government.

Concerning the war in Ukraine, the Mongolian government opted for prudence. The government abstained from voting during the UN session, and the Mongolian People's Party's ruling party showed some proximity with the party United Russia by adopting its guidelines and indications. The country recently participated in the Russian-led military drills, Vostok 2022. The military exercises were held in Siberia, the Far Eastern Federal District, the Sea of Okhotsk, and Japan. China, along with Russia, was one of the prominent participants in this endeavour. Although Ukraine showed its disappointment toward this general pro-Russian attitude, it is easy to understand the reasons behind Ulan-Baatar's stance.

Although projects like Power of Siberia 2 have the great potential to turn Mongolia into an essential player in the region, bridging China and Russia, the fact remains that Ulan-Baatar's margin of action is objectively restricted. Pragmatism and neutrality vis-a-vis China and Russia seem to be the only reasonable approaches for a country not at all blessed by geography. This immense and sparsely populated state is sandwiched between two authoritarian rule-based giants and has no outlet to the sea. Notwithstanding the unfavourable location as well as the political orientation of its neighbours, Ulan-Baatar managed to establish a sound democratic system. Consequently, if balancing is just an option for some countries, this option becomes a necessity for Mongolia.

In this light, refusing Gazprom's proposal, or any other project suggested by the powerful neighbour, would not be wise, at least politically and strategically speaking. Notwithstanding the democratic character of Mongolian politics, the traditional satellite position is not easy to relinquish. The positive side, though, is that, economically, the ambitious project is undoubtedly a breath of fresh air for a country unable to diversify its economy and hit by the pandemic and the subsequent border closure with China.

Russia Does Not Need Western Brands