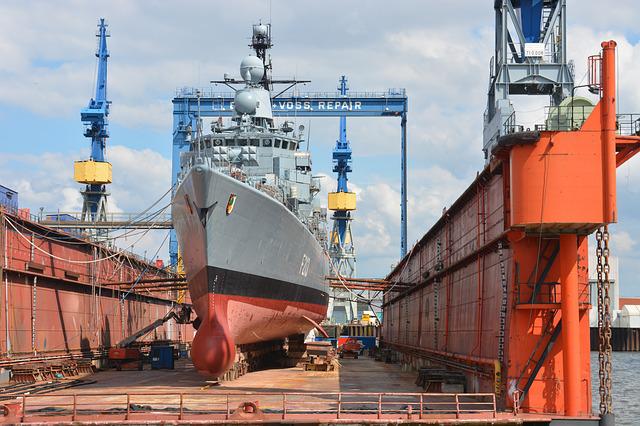 “If you want to build a ship, don’t drum up the men to gather wood, divide the work and give orders. Instead teach them to yearn for the vast and endless sea”- Antoine du Saint-Exupéry.

ABG Shipyard Ltd. of ABG group was incorporated in the year 1985 as Magdalla Shipyard Pvt Ltd with its headquarters in Mumbai and has shipbuilding operations in Dahej and Surat, Gujarat. The main objective of this business was shipbuilding and ship repair. From the year 1993, the company received major orders of building mini bulk carriers for Vikram Ispat. In the subsequent years they received export orders as well.

In the year 1995, the company was listed on the Indian stock exchange. The company received its first government order from the Indian Coast Guard for Interceptor Boats in the year 2000. Thereafter they also entered into Gulf/Middle East market. The ABG Shipyard Limited later received orders from various countries viz Singapore, Thailand, Netherlands, Germany. In a span of 16 years, the company built 165 vessels of which 46 vessels were exported.

These shipyard companies usually require two to three years to manufacture a single ship. The shipyard industry stands out from other industries as it is not based on unit production. Every ship is based on the owner’s requirement. Hence, every design, dimensions, capacity and systems used in one ship may be entirely different from another and thus each ship costs around 44 to 100 crores each. Ship building and selling is a capital and time exhaustive procedure.

The 2000s was a remarkable period for all shipping companies as the economy was blooming all over the world. Developing countries like India, China and Brazil were experiencing enormous growth. Because of an increase in demand for goods the shipyards received a large number of orders to build more vessels. It was practical that the majority of the global trade was accomplished through sea. The banks and investors started investing billions into the global container shipping business as it was considered as a profitable business. Also, the banks started lending money to these shipping companies at lower interest rates.

Due to the rise in demand of goods, the demand for container ships was rising faster than the supply rate. Thus, during this period, the shipping industry kept ordering new vessels. However, in the year 2008, the recession snuck in and thousands of companies went bankrupt. This led to cancellation of orders by the shipping company as they could not pay what they owed to the shipyards. Ultimately the shipyard industry that were working on manufacturing of vessels, which usually takes two long years to build each of them, were left with huge inventory with no buyer at all. With no business, massive amounts of capital that was utilized to make the ships got sealed into dead inventory.

Coming to ABG Shipyard Ltd, it was one of the largest shipping companies to manufacture vessels upto 20 tons and manufactured 165 container vessels. Like other shipping companies, ABG Shipyard also benefitted from the golden period of the early 2000s. In 2007, the ABG Shipyard Ltd entered into Oil Rig construction with an investment of ₹6 billion to replace opportunities in the offshore energy sectors. Rising crude oil prices had spurred demand for replacement of oil rigs. Several shipbuilders along with ABG Shipyard Ltd were attracted to this sector. The company made several acquisitions and planned to expand the business. Simultaneously, the company was receiving huge vessel orders globally.

However, after the recession the establishment also started to lose orders. During this period, the company bagged a prestigious order for the construction of 2 units of premium self-elevating jack-up, JU-2000A, Rigs from Essar Oilfields services Ltd, Mauritius.

The company also received renowned orders from Indian Navy and Shipping corporation of India with an order amount of $2.7 billion. The ABG Shipyard reached out to banks for loans. Once the company received orders it reached out to banks claiming that orders are from renowned company and claimed that to accomplish the orders it requires credits. Usually when the request is high a Public Sector Unit Bank leads the consortium. Consortium means a bank created by numerous banks to fund a project that is too large for a single bank to fund alone. Hence 28 banks came under the consortium. The consortium was unexpectedly led by Private sector Bank, ICICI, which was the largest lender here who offered one-third of the overall debt amounting to ₹22,842 crore. The total amount of loan given by top five banks were ICICI ₹7,089 crores, IDBI Bank ₹3,639 crores, SBI ₹2,925 crores, EXIM Bank ₹1,327 crores and Indian Overseas Bank ₹1,244 crores.

The company couldn’t pay off the dues inspite of such huge orders and went into losses from 2013. According to investigations, the orders for building rigs were never built and never delivered. It was claimed that many of these orders were non-serious orders and were meant to show that the business was promising.  It appeared that a major part of these loans were given against the assets of ABG Shipyard Ltd. Out of which the unsold inventory was the major portion of the asset pledged and the remaining was given on the guarantee by the promoters.

In 2013, the account was declared as “non-performing asset”. (Non-performing asset is the amount of loan or advance which has remained overdue for a period of 90 days.) It was evident that the company was not doing well and was unable to pay back principal and interest amount.

In early 2014, the banks in consortium came together and planned for Corporate Debt Restructuring. CDR is executed when the company is unable to repay loans and banks tend to reduce interest rates, extend the repayment period or convert some debt into equity with a hope that when business settles, it will be able to recover money. But here the restructuring plan also failed.

With intense investigation by forensic auditors, money laundering came into the picture. It was reported that the company invested the amount of loan in 16 shell companies. As per CBI, loans were diverted to 98 sister companies and were used to create personal assets.

In 2018, EY (Ernst & Young) was appointed by the SBI to conduct a forensic investigation. EY identified that the funds were diverted and fraud took place. Further, SBI and other banks filed a complaint in 2019 with CBI and subsequently filed FIR with CBI. The CBI registered an FIR against ABG Shipyard Ltd and its directors in February, 2022. It is noted to be the biggest bank fraud case in the history of India for allegedly defrauding 28 banks to the tune of ₹22,842 crore.

According to the FIR, the forensic audit revealed diversion of funds, misappropriation and criminal breach of trust. There were payouts running to hundreds of crores to related parties. Properties were also purchased from the funds provided. The forensic investigator also detected evidence of circular transaction. It also filed that the amount of securities provided by the company against credit facilities amounted to ₹8,608.35 crore. The CBI FIR states that the role of public servants needs to be investigated in the matter.

The company is now accused of allegedly siphoning off bank loans and is facing liquidation through an insolvency process at the National Company Law Tribunal.