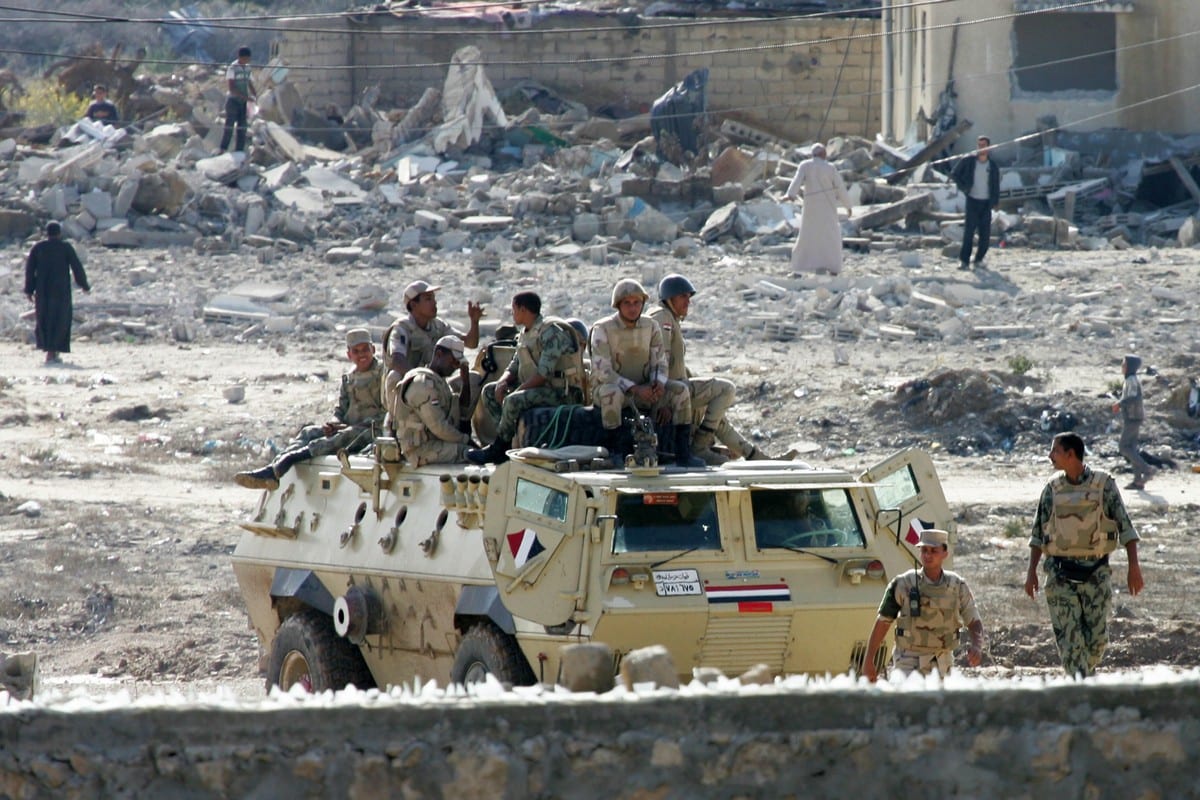 [Image Credit: The Times of Israel]

The Sinai insurgency groups started to launch a series of attacks on Egyptian government forces between 2011 and 2013, but their history dates back to 90s-00s.

The Sinai Peninsula is sparsely populated because of its geography - 90 percent of the area is desertic - and it has a long history of marginalisation from Egypt mainland. Israel seized control over the area following the second Israel-Palestinian war (1963). Then the territory was returned to Egypt by the Camp David Agreement (1979).

In the 1990s, Egyptian President Mubarak set up an action plan to make South Sinai a tourist spot. The North was excluded by the socio-economic benefits of this process. Since then, insurgency armed groups flourished in the area, and as the inequalities between North-South deepened, salafi ideology spread in the zone.

The leader of al-Qaeda Al-Zawahiri wrote in 2001 Knights under the banner of the prophet, which strongly impacted insurrectionist movements in the Sinai Peninsula. He described this area as the ideal place to host training camps and guerrilla bases due to its geographical characteristics. At that time, the area was a perfect hiding place both for radicalized people fleeing persecution by the Egyptian government and for jihadists coming from the Gaza Strip.

Between 2004 and 2006, the armed  organization al-Tawhid wa al-Jihad made a terrorist attack on a tourist resort in the South Sinai. The Egyptian government responded with arbitrary arrests and collective punishment measures to the detriment of tribes living in the North without taking into account their alliance to the terrorist organization.

Aftermath the outbreak of the Arab Spring (2010-2011), the jihadists trafficking in Sinai Peninsula improved their combact strategy and reinforced their relations with the Salafists living in the Western Desert on the border with Libya.These dynamics led to the reshaping of the Sinai insurgency under the name of Ansar Bayt al-Maqdis (Supporters of the Holy House).Starting from July 2012, the organization targeted Israel and Jewish communities living in North Sinai.

The Egyptian President Muhammad Morsi - who was in power from June 2012 to July 2013 - sent a delegation of political and religious figures to the Sinai Peninsula in order to mediate with the jihadists of Ansar Bayt al-Maqdis but without any achievement.

Following the military coup of July 2013, General Abd Al-Fattah Al-Sisi began his political bid for the position of President. He expressed immediately his intention to neutralize any form of internal contestation to his power without distinction between moderate and radical Islamist movements.

In November 2014, Ansar Bayt Al-Maqdis declared its allegiance (bay'a) to the Islamic State (IS/Daesh) by taking the form of Wilayat Sinai (Sinai Province). This resulted in an escalation of violence against Egyptian security forces and bedouins who were accused by the ISIS affiliate of collaborating with central government and Coptic minorities living in al-Arish in North Sinai. Although the emergence of Wilayat Sinai jihadists on the Peninsular- formally adopted the Islamic State's operational agenda- they preserved their autonomy from Daesh, focusing on their local targets.The aim of the organization is to overthrow the Egyptian government rather than creating a global caliphate. Indeed, the organization's attacks have remained under the direction of resistance units, and their targets strictly local.

In response to the escalation of attacks carried out by Wilayat Sinai in the north of the Peninsula, Al-Sisi strengthened counter-tertosim measures without significant results. Following the Al-Rawdah massacre, President Al-Sisi expressed his willingness to permanently defeat Wilayat Sinai within three months. The next year he launched the Comprehensive Operation Sinai 2018. The United States and Israel offered military support to Egypt to defeat the Sinai insurgency.

Comprehensive Operation Sinai 2018 has exacerbated the socio-economic disparities within the Sinai Peninsula, leading to the destruction of entire villages. Arbitrary arrests, forced displacements, torture, and extrajudicial executions have become the normality in the area.

Since March 2019, Wilayat Sinai has succeeded in extending its reach westward, striking military camps, and occupying several villages. Between 2020 and 2021, numerous attacks were carried out by the organization between Bir al-Abd and Rafah in North Sinai. In its latest online communications, it has called on Muslims to join the fight against President Al-Sisi, and has reiterated that Islamic law, in its Salafist interpretation, is the only salvation for Egyptian Muslims.

The current instability in Sinai is influenced by different factors - the lack of reabsorption of Bedouin tribes in the Egyptian society, the structural inequalities between center-periphery, and the strong government repression - which have pushed Bedouin tribes to consider jihadist militancy as the only instrument of social and political empowerments.

The phenomenon of the Sinai Peninsula's insurgency reflects the endemic problems of a country where the policy of suspicion and zero tolerance favor nothing but political alienation and marginalization of the poorest strata of society. However, the new pharaon of Egypt do not want to realize this and the jihadists become more and more resilient. As the story showes us.