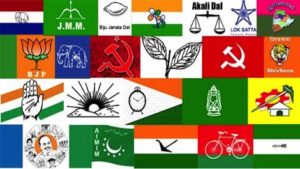 Who will ascend the throne of power in Punjab, what is the strategy of the parties to woo half the population?

Lohri, the traditional festival of Punjab. After the birth of a son or the marriage of a son in a house, the glory of the first Lohri is different, but over time, the traditions have also changed. Now the practice of pouring Lohri for daughters has also increased in Punjab. Large-scale work to improve the condition of the sex ratio in the state has also yielded good results, but there is still room for further improvement.

This time the Lohri of Punjab, coloured in electoral colours, is special, the improving horoscope of daughters and the increasing participation of women voters in the elections has given a new dimension to the desire of the leaders to touch the sky. Because they all know that when the procession of power goes on, only 'Putt' (son) will ride the horse. The reason for this is also clear because no party is fielding a woman in the election as the chief minister's face. That's why leaders are making big announcements focusing on half the population. He knows the power of women, also that without her blessings the struggle for power cannot be won. Somewhere half the population will also decide that 'Kaun Chadhuga Satta di Ghodi' in this struggle. Improved horoscope of daughters, women's participation in elections has made leaders make certain announcements to cultivate them.

Keeping an eye on women's participation

Years Birth Ratio of Girls to Boys per 1000

Waiting for the fulfilment of the right of representation

Women got 50 per cent reservation in panchayat and civic elections but this is not the case in assembly elections. SAD and AAP have not given tickets to many women. While the remaining parties are yet to announce the candidates.

Announcements of political parties-leaders for women

Congress has not yet released the manifesto, but the party's state president Navjot Singh Sidhu has made many announcements.

2000 rupees per month and eight gas cylinders free in a year.

Electric Scooty to the girl students on showing the slip of admission in the college.

Announcement to increase the honorarium of 53 thousand Anganwadi workers and helpers from January 1, 2023.

The decision was taken to increase the monthly honorarium to 22 thousand ASHA workers.

The decision to give 1000 rupees to widows and elderly women in addition to monthly pension.

1000 rupees per month to all women above 18 years of age on the formation of the AAP government in Punjab. This amount will be separate from the old-age pension.

Announcement of giving 2000  rupees per month to all the women of the blue card beneficiary families when the Akali-BSP coalition government is formed.

In the previous coalition government, bicycles were given to girl students free of cost.

The box of announcements is yet to open. Chances are that he won't be behind either.

Captain had made free travel of women in government buses while being the Chief Minister.