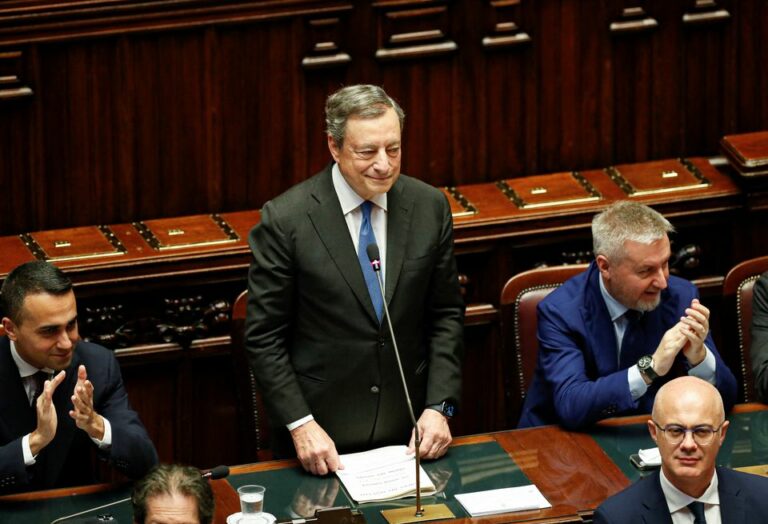 On Thursday, July 21, Italy’s President Sergio Mattarella accepted the resignation of Prime Minister Mario Draghi, dissolved the parliament, and called for new elections. Draghi’s resignation marked the end of a period of stability in Italy.

After populist and nationalist groups in the parliament abandoned Prime Minister Draghi during a confidence vote on July 14, President Mattarella hoped for a reconciliation between the political forces of the parliament and the Prime Minister until the next election, which was supposed to happen in the spring.

During his 18 months as Prime Minister, Draghi, a former president of the European Central Bank, helped save the euro had been trying to increase Italy’s international influence and improve the general economic situation, making Italy a crucial part of the Western alliance that stood up against Russia’s invasion of Ukraine.

He was also trying to reinforce the government to implement a plan for Italy to use the post-pandemic European Union funds for reforms to make the country an important force in promoting European unity and values while becoming more independent in the global energy scene.

Draghi’s centrism has been moderating influence on Italy’s populist political forces, toning down their extreme conservative tendencies while they were a part of Draghi’s national unity government until its abrupt collapse.

During an evening address to the nation, Mattarella thanked Mario Draghi for his service and stated that there was no hope for a new majority. He said, “Dissolving of the parliament is always the last choice,” and he needed to call early elections. The government planned new elections to take place on September 25.

Like many other European countries, Italy is facing huge challenges regarding inflation, the war in Ukraine, the continued threat of the pandemic, and the reforms needed to obtain European Union recovery funds.

Draghi told the cabinet that they must deal with emergencies related to the pandemic, the war in Ukraine, inflation, and the cost of energy. He will stay in a caretaker capacity until the elections are concluded, dealing with these issues as well as providing a smooth transition to the new elections.

Polls currently demonstrate that a bloc of conservative parties, led by the far-right Brothers of Italy, has the majority on the ballot. Because the Italian electoral system favours strong coalitions, the right-wing alliance of the hard-right League party, the Brothers of Italy party, and the Forza Italia party of former Prime Minister Silvio Berlusconi has a stronger hand compared to the fragmented center-left.

In the aftermath of the resignation crisis of Draghi, Italian bonds and stocks sold off sharply due to concerns regarding a delay in reforms and the possibility of the new government being a more difficult partner for the European Union.