Why the West prefers the relatively civilised: The reason behind the hospitality towards Ukrainian refugees. 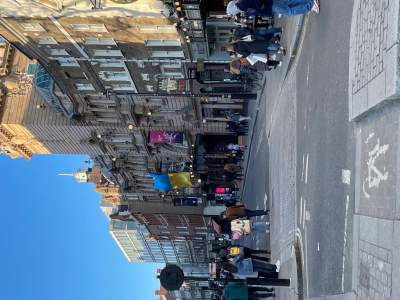 Europe has been flooded with Syrian refugees and, most recently, Ukrainian refugees.

However, when comparing statistics, only 3.4 million refugees have fled Ukraine as of the 19th of March in comparison to a total of 12 million Syrians who attempted to flee to Europe. However, the question to ask is which group was welcomed with open arms?

European hospitality is shown by focusing on measures prepared by the EU, including residence permits, clothing, food, employment and accommodation. In comparison, Syrian refugees have struggled to see such welcomeness towards them. For example:

In 2021, 3,800 Syrians sought protection in Bulgaria, but only 1,850 received refugees or humanitarian crises. In 2022, it welcomes all Ukrainian refugees with open arms.

Poland continuously pushed back waves of immigrants coming from the Middle East but has been welcoming those fleeing Ukraine.

Hungary built a barrier along its southern borders to prevent the influx of Syrian refugees that came during the civil war, but the entry of Ukrainian refugees has triggered support in the form of transport, food, and accommodation.

The sympathetic response towards the Ukrainian refugees all comes down to the idea of collective identity. The basic definition for this would be factors such as language and culture belonging to or shared by two or more people, therefore placing them in the same category, which is the European middle class. In comparison to Syrian refugees, Ukrainian refugees are described as civilized because of the commonality in terms of lifestyle, language, and culture.

However, this situation has brought to light the racist undertones of Western news outlets due to the sudden trending of phrases such as ‘the relatively civilised’ and ‘Blonde hair and Blue eyes welcome’.

For instance, Western media sympathy with Ukrainian refugees is evident when one of the BBC panellists has described how difficult for him to see 'Europeans with blue eyes and blonde hair killed." It all goes back to skin colour and identity.

NBC News from the U.S had begun using phrases such as "These are Christians, they’re White.  "They’re very similar to us" and "these are not refugees from Syria'. Thus, outlining the importance of collective identity is in the reaction of these news outlets.

Collective identity requires gaining the sympathy of the West in situations of war.

It is required in order for the west to consider you as human. However, Syria did not see that when the refugees were not considered civilized enough. Thus, Europe has limited its acceptance of refugees to have the ‘relative civilized’ of refugees.

The media’s response towards the current conflict has portrayed how flagrant racism is shaping Europe’s reaction to the influx of Ukrainian refugees.

Africans and Non-Whites Facing Discrimination in the Ukrainian Crisis