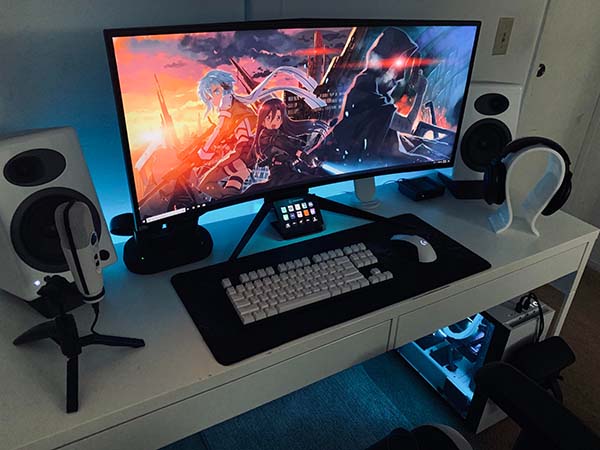 There are a wide variety of genres when it comes to different types of games which include first-person shooters, open-world roleplay games (RPGs), sandbox games (Techopedia explains that it is a style of game that has few character limitations for the player, which allows them to explore and edit the in the game world.), fighting games, puzzle, and arcade games. The list goes on, as explained by Dwight Pavlovic at HP.

However, one of my favourite genres in the gaming world is Massive Multiplayer Online Roleplay Games (MMORPGs). These games allow one to play with other players across the world depending on which server you join (a server is like a TV channel in that it varies depending on which region you choose to play on. So, for example, there are European regions, North American West, North American East regions, Eastern (Asian regions), and more).

MMORPGs are exactly like the main video game themes as there are different genre’s within the genre of MMORPGs. For example, there are different styles such as fantasy (Lost Ark or Final Fantasy 14 Online (FFXIV)), Sci-fi (Skyforge), first-person shooters (Destiny 2), turn-based strategy (Arknights), simulations (MMORPG Tycoon 2), racing (Grand Theft Auto Online), and more.

In my opinion, MMORPGs are enjoyable games you can play with your real-life or online friends. I want to say that my opinion on MMORPGs is established through years and years of playing various MMORPGs. I first started playing this game genre when I was 12 years old and have continued to play even to this day. I have played first-person shooter MMORPGs, turn-based strategy, racing, and some sci-fi, but most of the MMORPGs I play fall under the category of Fantasy.

Surprisingly many of the MMORPGs I played over ten years have not yet died (meaning the company shut them down or people just stopped playing them). For example, I used to play Perfect World International (published by Perfect World Entertainment, which no longer exists under that company, but is now under Gearbox as of 2021), Magma Flyff (which is no longer known as Magma Flyff but as Flyff Universe). I also played Mabinogi, TERA (unfortunately, TERA is in the process of being shut down on June 30, 2022, according to ByteStix on MMOByte), MapleStory 2 (which was unfortunately shut down on May 27, 2020.), and Elsword (an anime based game that is still active to this day).

In recent years I have started playing different MMORPGs, including FFXIV, Lost Ark, Destiny 2, and Black Desert Online. Of these four games, I would say that my favourite one is currently Lost Ark, as the graphics in the game are amazing, and the story is refreshing and full of details. However, Lost Ark has recently had issues with bots (these are accounts that are created to spread advertisements and essentially fill up the servers which creates a large wait time to play.). The issue with the bots has been acknowledged by Amazon Games (the creator of Lost Ark). They explained that although several million bot accounts are banned, they are still struggling to deal with them and recognize that the community of players is frustrated due to this issue, as stated by Tom Phillips on Eurogamer.

MMORPGs are not necessarily a game that everyone would want to play, and these games also depend on your internet connection as you are playing with other players across the world (depending on which server you joined). However, like most games, your internet is not the only requirement for playing MMORPGs; you also need a good graphics card, enough RAM, and space on your computer.

In some cases, certain MMORPGs require a monthly subscription to play the game. For example, FFXIV uses a monthly subscription, but it also requires you to buy the game and its expansions before you can play. To find out the exact costs needed to play FFXIV, one would want to go to the FFXIV Online product page.

If you are interested in trying out an MMORPG, I would suggest trying out one that is free-to-play before spending a large amount of money on a game that must be paid for.

For example, one of my favourite free-to-play MMORPGs would have to be Lost Ark. It has an amazing story, great content, and amazing graphics. The company earns its money through custom items such as skins, mounts, pets, and other in-game purchases, as shown on Lost Ark’s official shop page.

Many MMORPGs that people play have an in-game feature known as dungeons. These dungeons allow players to team up with other players to defeat a boss monster or complete a final part of an in-game story. Although a person could attempt to do the dungeons independently, most people find it easier to team up with other people because of level restrictions. However, once a person has reached a higher level than the recommended level, they could attempt the dungeon on their own due to them being higher than the boss’s level.

This is quite common when it comes to dungeons in FFXIV. It allows players to grind (level up their characters faster by defeating enemies and completing dungeons) and collect in-game rewards. And who doesn’t love in-game rewards that allow you to customize your characters?

Hopefully, you will be able to find an MMORPG that suits your tastes, and if this game genre does not interest you, that is perfectly fine. Not all genres of games are for everyone.