An illegitimate place to "rest in peace": the scandal of unborn foetuses's cemetery in Italy 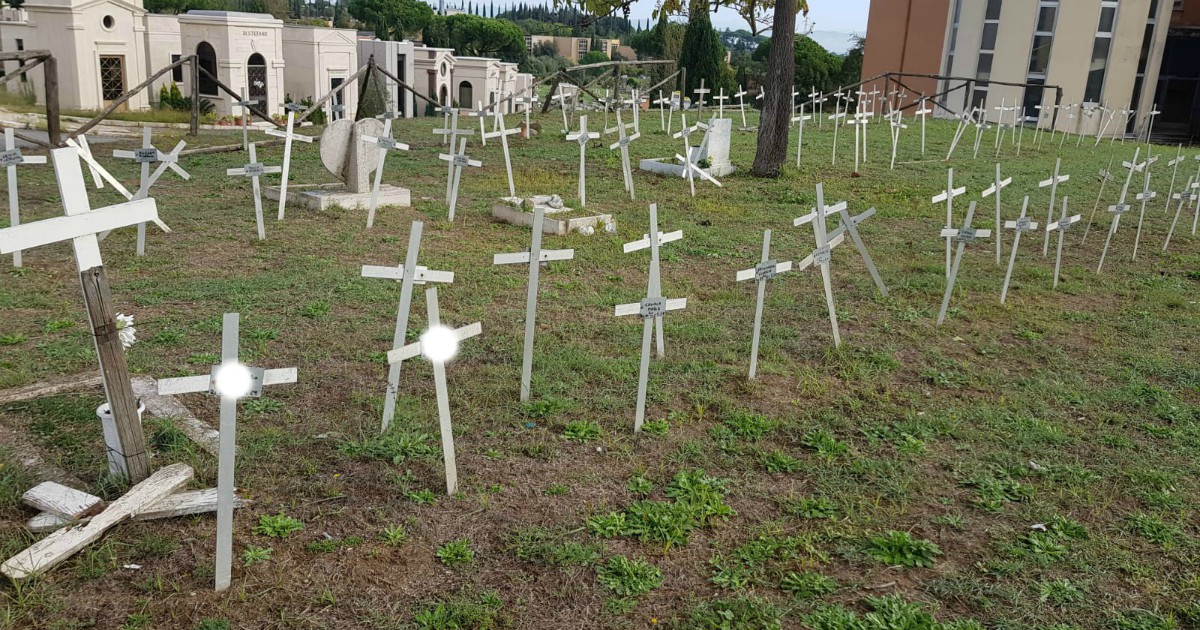 In September 2020, a scandal that had been lasting for many years was finally uncovered and investigated: the cemetery of unborn foetuses in Rome, Cimitero Flaminio.

It all started with a Facebook post; nobody knew about this practice before in Italy. On September 28th, 2020, Marta Loi published on her Facebook account the denunciation of her unborn foetuses’ burial, which she found out of a year after her abortion.

She reported the existence of “Unborn babies cemeteries” as they are usually called by finding out that the foetus she had aborted for personal causes in due and legal time, had been buried in Flaminio’s Cemetery, Rome. On the wooden cross that was planted on the ground her name had been written, without her knowing about any of this. Her discovery opened an investigation around the country which revealed that at least 130 foetuses had been buried in that cemetery without the supposed mothers’ agreement and permission; the same outrage had happened all around the country. Cemeteries of unborn babies already existed (and still do) around Italy, until that time it was thought that those who existed were all allowed by the mothers, who agreed on the burial of their unborn children and decided to dedicate them a place to rest. On the contrary, what happened to Marta Loi and to many other women, who found out only consequently to Loi’s reporting, had not been consented by the women who underwent the abortion practice.

What happened to Marta Loi and to hundreds of other women is the following: these women aborted in the hospital, after undergoing several psychological pressures, which will be discussed and contextualised later on. Then, when the abortion was completed, the women were released from the hospital and allowed to return home, with an experience on their shoulders which is psychologically significative and heavy in a woman’s life.

In Italy, the regulation that follows abortion states that hospitals and local authorities are responsible for the foetus’s inhumation up until the 28th week, after that the burial is completed in the same way it is traditionally done in the case of a deceased person. If the abortion happens within 13 weeks of pregnancy the foetus still has not or has little developed, and the practice in the early months of pregnancy is less invasive than further on in the pregnancy. Therapeutic abortion can be done within 22 weeks of pregnancy where the foetus has formed further in its development and here the practice is done when the woman’s life could be lethally compromised by the pregnancy, or when the foetus’s development shows serious complications which could lead to the baby’s death, when born.

As abortion in Italy can be practiced up until week 22nd, it is the hospital’s duty to dispose the foetus’s remains, under the awareness of the woman who aborted.

What happened in Marta Loi’s case, but not only, as hundreds of women underwent the same violation, is the following. Given the high percentage of conscientious objectors in the hospitals (70%, 2021) abortion is even a harsher path for many in Italy. Witnesses, and victims I would add, are continuously questioned about their choice, which is the result of a difficult process for sure, and too many doctors, nurses and gynaecologists still dare to cross the line and impose their will on a woman’s free, and hard, decision.

In addition, many hospitals, and local sanitary associations (ASL) are in contact with radical Catholic groups which are definitely against abortion. Many of these groups operate inside hospitals and counselling centres and try to convince women not to abort (even when it is a necessary choice of health and survivance) by labelling the abortion as a murder, women who do so as killers. These same groups, one of the most famous is “Difendere la vita con Maria” (translated: “Defending life with Mary”), by being in contact with many hospitals, were given the illegitimate management of foetuses’ remains which were then buried by them in public cemeteries under the names of the women who had aborted them. All of this without the women knowing. Catholic rituals were done when the “unborn babies” were buried too.

This violation to the women’s choice and awareness of the burial was revealed and discovered only in 2020, but it is confirmed that this practice has been done ever since abortion has been legalised in Italy, that is to say since 1978. After Marta Loi’s denunciation, too many women found out that their foetuses had been buried under their names without them knowing, many found out even 20 years after their abortion. This practice of burying the foetuses without the women’s consent has left women in despair and anger, feeling that their choice was not only vandalized and demonized, but also disrespected and violated.

The awareness of that, in 2020, started several women’s campaign which fight for the respect and the freedom shattered in pieces by this practice. This revealed high numbers of women who underwent the same violation, showing Italian under-regulated laws in abortion and women’s protection. All the victims that have been speaking out so far have declared that the different hospitals they have aborted in offered an intimidating and guilt-inducing environment where not only the women’s choices were shamed, but the hospital care they received was very poor, linked to the nurses and doctors’ opinions on the abortion.

Fortunately, this process of illegitimate burial has been investigated and condemned both by the victims and by Italian and international media coverage which pushed to further needed regulations and control on safe abortion practices and patients’ mental and physical protection.
Yet, abortion in Italy is still too much of a harsh and hurdled practice, accompanied by little psychological patients aid who should be supported before, during and after the abortion.

It is shocking to find out how in 2020, and maybe still today as laws have not been set tighter, one woman’s decision is so easily hampered and questioned by supposed professionals who should only support one’s choice when it is legitimate before the law. This result of such a high number of practicing conscientious objectors in hospitals, as well as the miserable treatment of patients in the hospital is a result of the woman condition today in Italy.

By me being a witness of our condition in my country today, I still see structural sexism both in institutions and in everyday life even though campaigns and fights are being made for our rights to be respected. To even contemplate such a violation as the one of unconsented foetuses’ burial is significative of women’s undervaluation and consideration in Italy, where gender equality is yet to come. Fights still have to be made, victories still have to be accomplished.

Evolution of Abortion Rights In India