Does Covid exist only in schools and colleges, non-existent in election rallies? 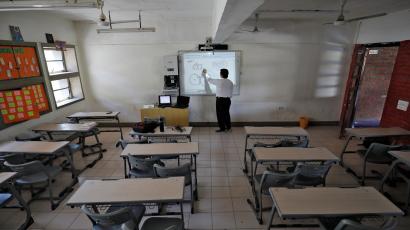 According to the Observer Research Foundation, school closures caused by the government's early lockdowns in reaction to Covid-19 harmed up to 2 billion children of India.

Major parties have sent leaders to campaign for several legislative elections in 5 states slated for February-March, even as COVID-19 spreads across the country.

Leaders have already spoken at rallies and attended public gatherings in Uttar Pradesh (UP), Uttarakhand, Goa, Manipur, and Punjab, to name a few states. These include prominent BJP officials such as Prime Minister Modi and Uttar Pradesh Chief Minister Yogi Adityanath, as well as Akhilesh Yadav of the Samajwadi Party and Asaduddin Owaisi of the All India Majlis-E-Ittehadul Muslimeen (AIMIM).

Amidst all this, the recently reopened schools and colleges were once again brought to a closure.

Numerous cities and states, including Delhi, Mumbai, Odisha, Punjab, and West Bengal, have declared the suspension of schools, colleges, and other educational institutions due to a surge in Covid cases across the nation, particularly the Omicron strain. The Uttar Pradesh government ordered a night curfew and the closure of all schools up to Class 10 till January 15. The Karnataka government had decided to close schools and colleges for two weeks, for the pupils of Classes 10 and 12.

These two incidents have been happening at a parallel timeline, at one end where the government sees no harm in continuing with its political propaganda, and on the other end, the schools and colleges are being put on a closure.

Here is what some of the parents have to say about children returning to physical classes:

All double vaccinated students above the age of 15 should be allowed to attend physical college and universities. Online studies are good but a student's basic growth as a human happens in educational institutions in person; with all the extracurricular activities and sports which are integral for their growth.

Children in schools from 8th grade onwards and college students must be allowed to attend physical lectures. As this age group understands all protocols. By doing so at least students can explore their life. As of now, it has been two years; kids are forced to be locked in four walls of the house.

~Bhakti Mahabadi- Mother of the student from 9th grade

Even during the peak of the 2nd wave, the Government didn't stop the election rallies but shut the schools and colleges, the same was repeated in the recent covid surge. This shows the double standards of the political parties whereas on one side they show their care for the students and parents and on the other side the government is putting the health of thousands at risk with crowded rallies. Since the time has come to learn to live with the ever-emerging Covid-19 variants, IMO, the government should allow schools and colleges to run with the best possible Covid appropriate behavior.

~Ramnarayan- Father of a first-year student.

Online lectures are a strain on the educational and professional lives of so many children, it isn't a privilege for a child to be able to attend school and receive an education it’s the birthright of every child. But since the last two years, students are not able to exercise this right properly as many students dropped out or their studies were disrupted heavily due to lack of infrastructure and internet.   It's shocking to see where priorities are placed when it concerns children's development. Using the internet to replace physical schooling does not give the necessary support for a child's overall growth. Remember that school is an essential social institution outside of the home where children learn to be self-sufficient. The cost of that kind of rejection is not mentioned, instead of focusing solely on the expense of infection.

Huge crowds, no social distancing, and hardly any mask in sight; this is how the election rallies in India look like, are we making the same mistake we made last year, pandemic has taken a backseat in the election season.

Dr. Chandrakant Lahariya, an epidemiologist said in one of his interviews that if other social events are capped to 50 to 200, why not restrict the number of people that can attend the election rallies.

Schools, colleges, and universities need to reopen for some normalcy to return, 18 months of offline education has had a huge toll on several students.