Erasmus+: the opportunity of a lifetime 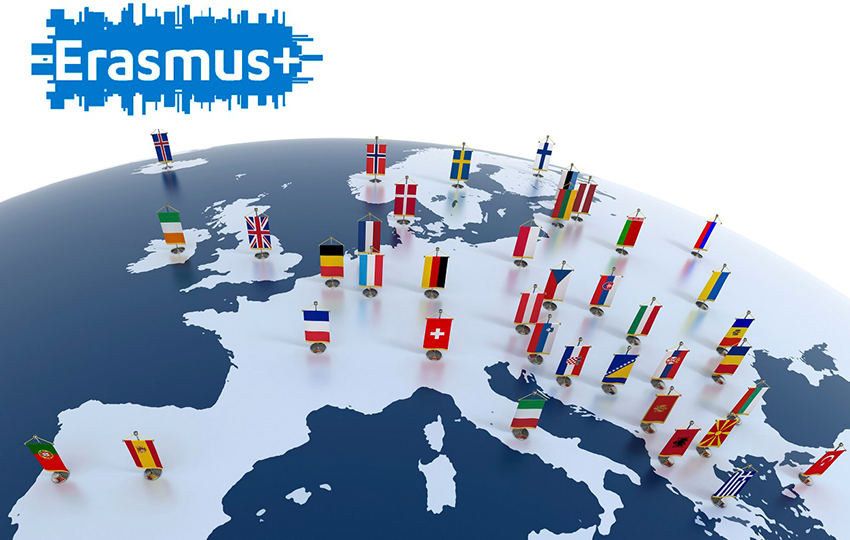 For around 35 years, European Union youth has counted on significant financial resources to support studying abroad. The project is Erasmus Plus, named after the humanist and theologian Desiderius Erasmus of Rotterdam. Indeed, the Erasmus program emphasizes learning through travelling and studying abroad, just like Erasmus of Rotterdam once did in his lifetime. Furthermore, Erasmus+ aims to improve “communication, language, and inter-cultural skills and gain soft skills highly valued by future employers” – as the European Commission’s website states. This is possible thanks to various exchange programs designed to promote education, training, youth, and sport.

What are we talking about?

The project addresses many receivers, such as pupils, students, teachers, trainees, youth workers, and adult learners. The duration varies according to the specific type of project. To join the program, the applicants need to be EU citizens. Alternatively, they may come from partner universities based in Norway, Iceland, Liechtenstein, North Macedonia, the Republic of Turkey, and the Republic of Serbia. Only recently, the United Kingdom withdrew its participation in the project due to Brexit. Additionally, the chances to study beyond Europe are given by the Erasmus Mundus program. 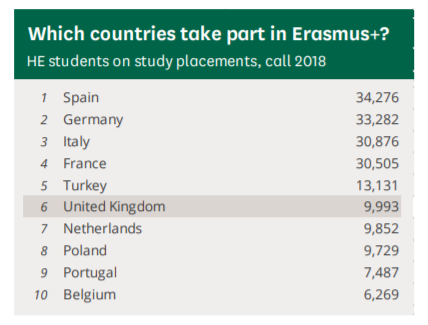 From the Commons Library Briefing (6 January 2021)

One of the most remarkable opportunities that Erasmus+ offers is the European Community Action Scheme for the Mobility of University Students. Due to inter-institutional agreements between higher education institutions, university students have the chance to study abroad, work on a final dissertation or take an internship for a minimum of 2 months and a maximum of 12 months. Since its foundation year, Erasmus+ has gained popularity and participation. The data shows a significant growth in the number of people involved, a growth that even the pandemic could not stop.

As a result of EU financial support, the beneficiaries dispose of scholarships, which are determined by the living costs’ of the destination country. Erasmus+ financial allocation for 2021-2027 has almost doubled since the previous funding for 2014-2021, with a budget of 28,4 billion euros. 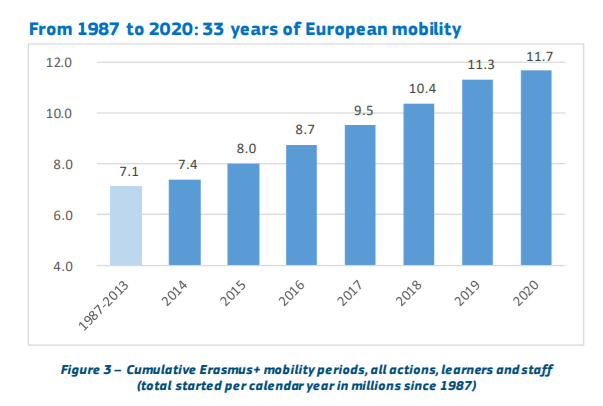 From Erasmus+ Annual Report 2020, Publications Office of the European Union

The reasons for the project

The EU views Erasmus+ as a vital project and continues to preserve and finance it. Learning a new language, making new friends, and visiting another country area are only a few of the numerous benefits of the program. Just like its nineteenth-century ancestor, namely the Grand Tour, the Erasmus+ can be regarded as a rite of passage that promotes culture and higher education. It stimulates individual and collective values such as multiculturalism, open-mindedness, and cohesion, as well as peace and unity within European Union and beyond.

The higher level of funding given to the category Cohesion, Resilience, and Values in the allocations for the years 2021-27 shows that the EU considers the promotion of its principles as fundamental. Interestingly, the second heading includes investments in young people, health, and culture to protect the EU’s values, strengthen the cohesion among the Member States, reduce disparities in EU regions and promote sustainable territorial development – the European Commission website declares. This part of the allocations includes the necessary funding for the Erasmus+, which is considered a pivotal scheme to spread and emphasize EU core values. 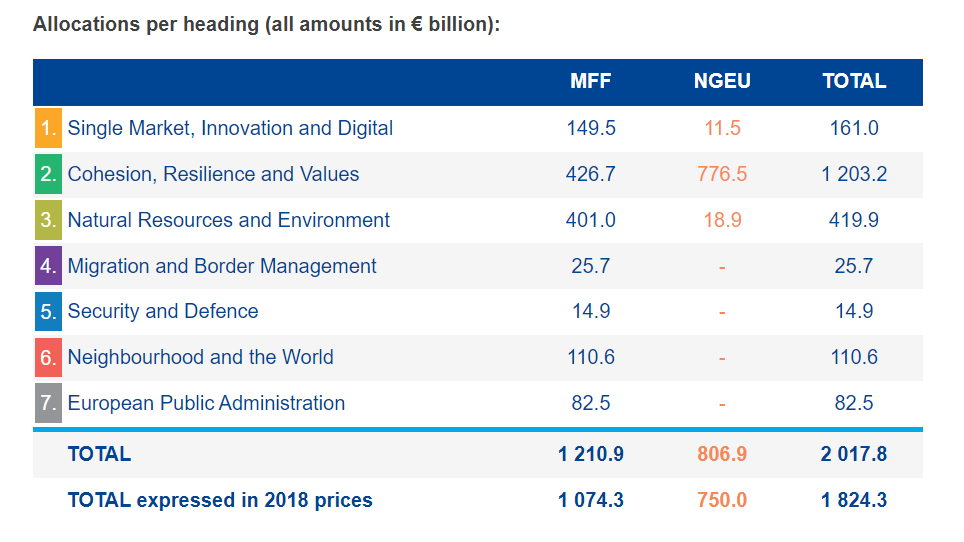 A brief history of the Erasmus

The Erasmus is a recent achievement for the EU. The project was initially set up in 1987 for a ten-year trial period. It was proved successful and has been confirmed ever since.

It was only in 2014 that Erasmus became part of a more extensive project, the Erasmus+. Sofia Corradi, an Italian pedagogue, is regarded as the mastermind of the whole Erasmus program. Also called mamma Erasmus in Italian (meaning “mother of the Erasmus”), she was the first to come up with the idea of a European scheme to enable students to study abroad. In Corradi's book, Student mobility in Higher Education Erasmus and Erasmus Plus (2015), she writes about the struggles to make her idea a reality. She needed to get the approval of several leading experts and politicians, in tandem with her fight against bureaucracy and scepticism for eighteen years. 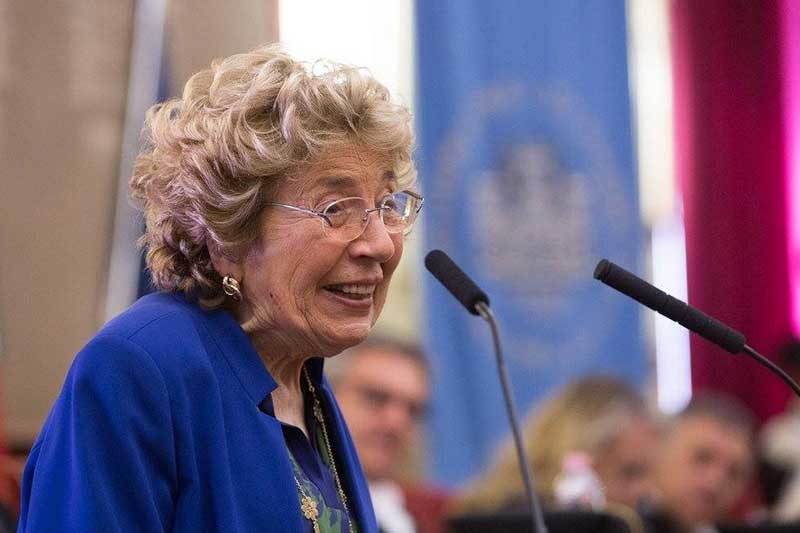 Since 1 February 2020, the UK is no longer an EU Member State. Therefore, the UK government has chosen not to join the new Erasmus+ program 2021-27 as an associated third country. The UK's Prime Minister Boris Johnson explained that the reason lies in the program's high cost; however if the UK spent around €160 million each year on the Erasmus+ program, the international students provided a significant source of income for the British economy.

The UK government has launched the Turing Scheme, named after the English mathematician Alan Turing. The global scheme will offer funding to British students for education and training opportunities. It will cost approximately €116 million per year. According to the GOV UK website, the Scheme has got additional advantages when compared to the Erasmus+. Firstly, it provides international prospects, while Erasmus+ addresses mainly Europe, excluding Erasmus Mundus' global opportunities. Secondly, the Turing Scheme is thought specifically for underprivileged students. Lastly, the Turing project provides substantial funding to support effectively disadvantaged students. 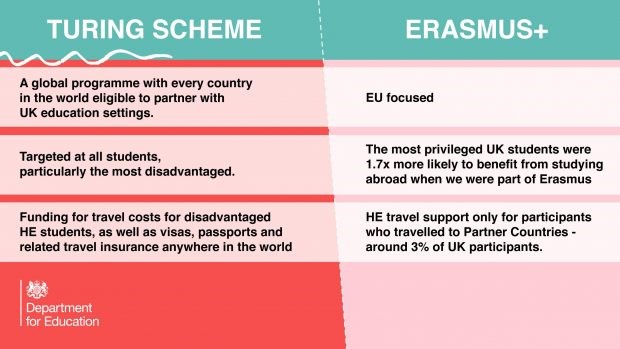 From The Education Hub (GOV.UK)

Despite Brexit, today, some Erasmus exchanges continue thanks to bilateral agreements between British and European universities. For example, the University of Manchester states on its website that it “remains committed to working with its European and international partners.” Meanwhile, most British universities are working with the Turing Scheme, which seems to be the future of British exchanges worldwide.

Amazon Invalidates Visa cards in The UK, Find Out Why