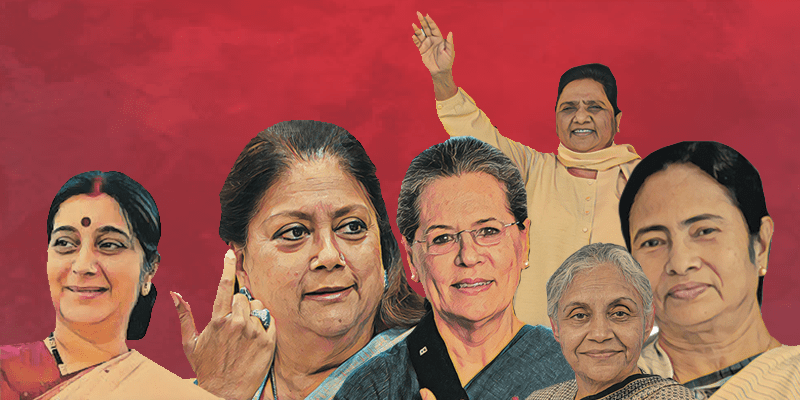 Women, in today’s world, are becoming the most important and bigger part of politics and the recognition of their talents and leadership has been increasing. Over the last six decades, the rate of women’s representation in politics has incrementally increased but not as much as it should for a country with a female population that’s larger than that of the United States and a thriving democracy that prides itself on being robust and responsive. India has done rather poorly when it involves female representation in politics. The 16th Lok Sabha has only 11.8 per cent women among 542 members.

Earlier women were limited to the four walls of the house, but nowadays they’re everywhere because they are more capable of running the nation. In the battleground of Indian politics, one’s demographic is ideally placed to alter this disheartening statistic i.e, working women.

Having more professional women in politics can be a matter of both representation and capability. It’s a chance to shape the long run in a meaningful and impactful way. As representatives, women can eliminate systemic biases and structural barriers and gender-based violence. To dismantle structural barriers, the responsibility certainly falls on strong powerful women who have successfully overcome constraints.

To design and implement laws that encourage better education for girls. To secure financial independence and equal wage employment for women. To push up the abysmal female labour force participation rates. To make sure that female hygiene products aren’t taxed as luxury goods. There is nobody better than women themselves who can design such policies.

According to the 108th amendment bill of the Indian constitution, 1/3 of all seats in the lower house of Parliament of India, the Lok Sabha and all state legislative assemblies are reserved for women. But, the reservation is not as strong enough as it should be and thus it’s still ineffective to bring women into politics. Even today a patriarchal mindset is strongly evident where they believe only men can run the world and are capable of doing everything. From the beginning, the fact is, women are more capable and no less than men but are still treated unequally and are only deemed capable of cooking and household chores.

According to the WEF Global Gender Gap Report of 2020, India ranks 18th from below in terms of the representation of women within its parliament. Although, women have held the positions of President and Prime Minister, as well as chief ministers of various states in India. Citizens of India have elected women to several state legislative assemblies and national parliament for many years.

But still, India’s failure with women’s representation in politics is not always appreciated internationally. Perhaps due to a handful of powerful women leaders commanding the headlines. Indira Gandhi was a famously hard-nosed prime minister and towered India’s politics for many years until her assassination in 1984. In contemporary times, Sonia Gandhi, president of the congress party and Mamata Banerjee, chief minister of West Bengal, are often touted as examples of women empowerment.

Yet as important as Sonia Gandhi and Mamata Banerjee also are examples, each has deep ties with the political elite. Sonia Gandhi was desired into politics after several years in 1991. Mamata Banerjee’s political rise was through activism and politicking. But she was still fortunate enough to earn several degrees at a time few women passed the secondary school exams.

Women are more successful in every aspect and women in leadership positions reduce the negative perceptions men have about their effectiveness as leaders. But people of India not only need more women in politics but also need more creative and competitive women in politics. India makes laws that determine how the technology, public safety, economy and foreign policy will look like in the coming years and the nation needs more professional skills in the legislative bodies.

Over the past few decades, women have made their mark as effective leaders for the nation, PR, civil servants, police, corporate leaders, scientists, journalists and doctors. These are the women who know how to solve problems, get things done and manage multiple responsibilities for the betterment of the nation. Electing efficient women in politics will help the nation to achieve better representation and expertise simultaneously.

However, when it comes to women in politics and their involvement within the real decision-making process, the power still lies with the men. While national and powerful parties try to sell the concept of reservation on paper, they have hardly managed to stand by their own words when it involves giving more women an equal chance to participate in elections.

The country still suffers from serious problems of gender inequality, cases of domestic violence, molestation, and sexual harassment. The major reason for the situation is because women have limited powers in parliament. The liberty to take decisions and actions without pressure and work independently will make an excellent impact on their performance and transformation in their leadership. This might only come through awareness, recognition and demand of the women, by the women and for the women.

There is still a long way to go for complete women’s political representation in India, especially at higher levels of government, with more female political leaders and more women exercising their democratic rights. We can hope for policy change that may contribute towards India’s improved performance on the other indicators of women’s economic participation and opportunity, educational attainment, health and survival.