Is Technology The Reason For The Generation Gap? 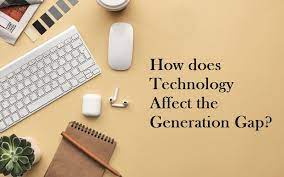 In the present times, we live more in the digital world than in the real world. Amidst the pandemic and flurry of chaos around us the indulgence of the people in technology has only increased. Just like any concept in the world technology also has its own set of vices and virtues and among all the set of problems technology is framed for one is a generation gap. It is one of the most talked-about impacts of the growing influence of technology in our daily lives but is it so? Is technology the reason why there is a generation gap among individuals from different age groups? Factually speaking generation gap is the chasm that separates the thoughts and views expressed by individuals of two different generations. Although there always has been a generation gap between the individuals of the society, in a family or any community it wasn't as evident as it has become now. It is an incessant social phenomenon, influenced by culture, education, atmosphere, and our lives. People born in different times have different ideas and opinions based on their circumstances and experiences of things which normally would differ from someone who has not seen things the way they have. It is always good to have a wide range of ideas and views but it becomes troubling when both sides are not ready to accept each other's ideas and rather adamant about proving each other wrong. Now the talk of the matter is how does technology comes into play and how it has widened the said gap between generations. Firstly the biggest section of adults who is the most tech-savvy is the millennials, for life before the internet and emails haven't existed everything and everything that happens in their life has to go on social media. The older generation although has quite fastly adapted to the changes technology has brought, they haven't seen it as anything more than just a tool that can make certain things easier, The people of an older generation might technically be able to use the internet, online banking, shopping and at times occasionally posting about their lives on social media but in the majority of the cases social media isn't that big a part of their life, technology has a very discarding effect on those lacking proper skills and hence the old ones have to face the need to keep up with technical progress contrary to which, for the millennials, it is more or less a different world altogether. Everything that happens in their life has to reach their friends/followers which one way or other isn't approved by the older generation. In the earlier times since the sources were less, everyone was more or less influenced in the same way, for example, everyone watched the news and tv together so everyone was influenced in the same way but today there is such a wide variety of sources and so many different platforms that every individual is influenced differently.

If technology has brought people together it has also distanced them. We are more connected with the people who are far away than the ones we share our homes with. Texts and messages can never be compared to sitting and talking about anything and everything with friends. Digitalization has changed the way we communicate our emotions online and emotions have been tied with social media especially for adolescents but at the same time the matter can not be only blamed on technology for all that it is, is a tool meant to make people's life easier and more pleasant. The major reason that can be said to be the cause of the generation gap is the difference in opinions regarding so many things like culture, traditions, society, and life views. Both of the generations have seen life in different lights and hence have a different understanding of it while millennials believe in doing things their way and not abiding by the rules or traditions of the society that might not line with their point of view. The majority of the older generation has their mind made up that the traditional and societal norms were made in the first place because they were necessary and hence should be followed by. Both generations have different mindsets and views but that is not what worsens the generation gap. What worsens the gap is the adamancy and inability to accept each other's ideas and see things from another perspective. For example, using the phone in front of your elders is usually thought of as a bad habit by the older generation while for the younger generation it is normal and there is nothing disrespectful about it. Now, this particular is a harmless scenario but certain very volatile issues have divided the generation into two different sides which are not healthy for a socially progressing environment.

Both the generations have things to accept and learn from each other and that can be done only through listening and understanding things from one other point of view and at its very core technology can be a reason for widening the generation gaps between generations but it can not be the only cause. There is a lot that goes around when people disagree on the aspects of technology and a lot of it has to do with our perspective on things and thought dynamics are, how we adapt with time.

As is said by so many wise people " Technology is best when it brings people together" technology alone can not bring people close or drive them away, human efforts and the will to co-exist peacefully are equally important.

Impact of the internet on society